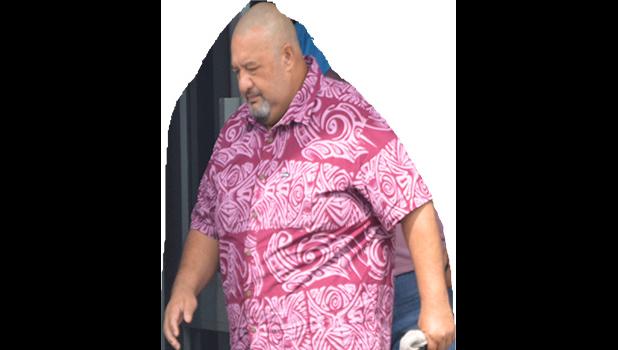 Pago Pago, AMERICAN SAMOA — The first of the co-defendants in the case where a package that was sent through the U.S. Postal Service in April of this year in which Customs agents found 7lbs of marijuana was sentenced to 24 months of probation and ordered to pay a fine of $1,000.

He was initially charged with unlawful possession of a controlled substance, to wit; marijuana, with intent to distribute, a class D felony. The charge against Tavai stems from an incident that occurred at the Post Office on Apr. 6, where 7 lbs of weed was found in a box allegedly belonging to co-defendant Logona Tigilau, another former Customs agent and a relative of Tavai.

The felony charge against Tavai was dismissed by Sunia in June of this year, after the government did not present any witnesses during a preliminary examination.

However, immediately after the court dismissed the felony charge, the prosecutor at the time, Robert Morris informed the court that the government had filed a new criminal complaint against Tavai, where he was charged with conspiracy to import drugs into the territory, a class A misdemeanor, punishable by a term of imprisonment of not more than 1 year, or a fine of nor more than $1,000, or both.

Following the government filing the new misdemeanor charge against him in June of this year, Tavai’s defense attorney, Marcellus T. Uiagalelei informed the court that his client wished to enter a plea of no contest to the charge against him.

When given the chance to address the court, Tavai apologized to the American Samoa government, the court and his family for any inconvenience and pain caused because of his actions. He then asked the court for forgiveness and a chance to be a better citizen and a role model for the community.

His attorney Uiagalelei supported the recommendation by the Probation Office that Tavai is a suitable candidate for a probated sentence.

Uiagalelei told the court that his client is a first offender who took full responsibility for his actions and for betraying the trust his employer and people gave him. He said that as part of his client’s plea agreement with the government, Tavai has agreed to work together with the government and cooperate with further investigation in the case against his co-defendant.

The government’s attorney echoed the defense’s argument, saying that despite the seriousness of what happen, the government feels that the defendant is a suitable candidate to a probated sentence without any period of detention.

In delivering his decision, Sunia stated that the defendant, who was a former government employee was convicted of a class A misdemeanor. Sunia did not wish to reveal the details of the defendant’s case, saying that there is a pending case in High Court. He then mentioned something about the agreement between the government and the defendant, where the defendant has agreed to fully cooperate with the government in their investigation, which is still on going in the case against the codefendant in this matter.

Given the defendant’s background including his education, number of years of his service to the government, his services with his family, village and church, the court feels that what happened was not a reflection of who he is.

“This is an isolated incident and it appears that he was willing to assist his family member without knowing there was anything illegal behind his action,” Sunia said.

Sunia then sentenced Tavai to a term of imprisonment of 12 months, however, execution of sentence was suspended, and the defendant was placed on probation for a period of 24 months with conditions.

The defendant was ordered to remain a law-abiding citizen, visit the probation office every month and pay a fine of $1,000. He was ordered to serve a period of detention of 90 days, however, the court deferred 89 days and credited him for the one day he served in jail when he was initially arrested by police in April of this year.

Tavai’s co-defendant, Tigilau’s case is still pending in High Court, and his jury trial is now set for June 2020. He’s out on a surety bond to await his trial.