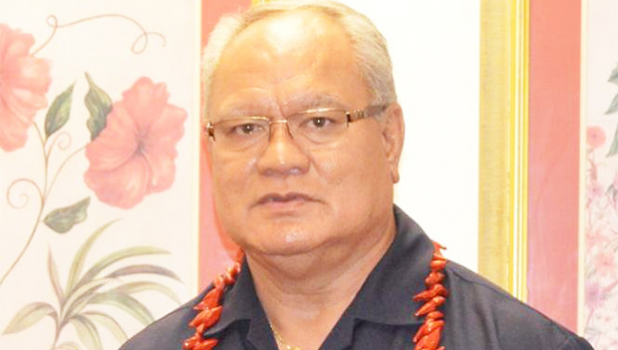 Pago Pago, AMERICAN SAMOA — Police Commissioner Le’i Sonny Thompson has called on the public to stop complaining about police enforcing provisions of the governor’s COVID-19 emergency declaration — the ASG’s COVID-19 Task Force has received complaints on police going into stores to allegedly enforce that only 10-people are inside a store at any given time.

At last Friday’s COVID-19 meeting called by the governor, the Police Commissioner, who notes that he had been home quarantined after arriving on island more than two weeks ago, gave an update on enforcement of the declaration, which calls for banning public gatherings, and ensuring that public transportation — buses and taxis — comply with the half-capacity rule in connection with the declaration.

A provision of the declaration states in part that buses and taxis are to cease operations at 6p.m except buses under contract with StarKist to provide transportation for its employees.

“During hours of operation, buses and taxis must institute social distancing practices. Each bus and taxi may only operate at half the seating capacity,” according to the declaration.

Le’i told the meeting that two bus drivers were arrested and charged last week — Wednesday and Thursday — for violation of provision of the emergency declaration but he didn’t provide specifics.

The two drivers appeared last Friday in District Court each charged with one misdemeanor count for carrying more than 10 passengers inside their buses. (See Samoa News story in court briefs published elsewhere in today’s edition for details.)

Le’i told the meeting that police are and will continue enforcement of dictates under the declaration as well as the governor’s executive order, which gives DPS enforcement power.

Among provisions of enforcement by police, he said, is a requirement of fewer than 10 people at a location or gathering and half-capacity rule for buses and taxis.  He also says that police do give possible violators a warning first but if it continues, the driver is arrested and charged.

Le’i claims that the problem police face in enforcement of the COVID-19 regulation is the community is not getting the information. He asked the public for consideration for officers, who also have families and want to go home to their families after their shifts.

The other issue of enforcement encountered by police deals with StarKist Samoa, including buses charted to bring in cannery workers.

He then called on the public to stop complaining as police carry out their enforcement responsibilities as directed by the governor.

Samoa News notes that among the problems encountered by police last week happened at Samoana High School, which was used for the distribution of food stamps, administered by the Department of Human and Social Service (DHSS). Police showed up to disperse the crowd and told them of the governor’s declaration, but encountered some angry residents.

At Friday’s meeting, Acting Attorney General, Mitzie Jessop-Ta’ase said the AG’s Office provides support to DPS for the enforcement and would prosecute individuals who don’t comply.

Lolo directed the task force to work with StarKist to ensure compliance with half-capacity seating for their buses and that the government will pay to get addition buses in order to comply.

Lolo said each seat on the bus should be occupied by one-person. For example, if there are 12 seats on the bus, only 12 people should be on the bus.

The governor noted the problem with food stamp distribution with large crowds, and instructed DHSS to find another option. For example, take the distribution out to certain areas in the eastern and western districts.

By Saturday morning DHSS issued new distribution instructions, with specific sites island-wide that went into effect yesterday. Samoa News observed several police cars around Samoana High yesterday morning, as a small line started to form around 6:30a.m — but this is no longer a pick up site for food stamps.

Customers were still reporting last week about police entering stores, with owners being instructed that they can only have 10 customers inside at any given time.  However, this provision applies only to restaurants, bars and nightclubs — in accordance with the declaration.

Responding to follow-up media inquiries, ASG’s COVID-19 Task Force chairman Iulogologo Joseph Pereira said the “same complaints have reached our Office and we have addressed this issue” with the Police Commissioner.

He acknowledged that some stores have established social distancing protocols with concurrent enforcement and “we commend them for helping enforce the declaration protocols.”

As previously reported by Samoa News many businesses — including major retailers on island — have already put in place social distancing policies, which were effective Mar. 23rd in accordance with the declaration.

“I think the businesses who are taking seriously the social distancing requirements and are putting protocols in place should not be punished for other business owners who are not vigilant in enforcing the Declaration advisories and protocols,” Iulogologo said last Friday.

“We will again address the issue with the Police Commissioner,” he said, noting that the governor “has been sensitive to the needs of businesses” to remain open, and it is the governor's hope that businesses will take responsibility in enforcing the mandates of the declaration within their respective establishments to ward off police intervention.

“Our businesses and our people need to take seriously the fact that the COVID-19 is a deadly disease and all of us are at risk if we don't take steps to prevent its spread,” he said. “The Governor's fundamental objective is to save lives and he has pledged an oath to protect all of us from any enemy; foreign or domestic.”

Last Wednesday, the American Samoa Chamber of Commerce sent out a notice to its members that the territory is “still at the threat level of Code Blue, until further notice,” and that level does not include limiting your customers or patrons within your business to no more that 10 people.” (See Samoa News edition last Friday for details.)

The notice was prompted after complaints from Chamber members that police showed up warning businesses about the alleged enforcement of only 10 customers inside a business at anytime.

However, as of last Thursday afternoon there were still public complaints — shared on social media — of police still telling stores of the 10 people inside protocol at any given time, despite what Code Blue states.