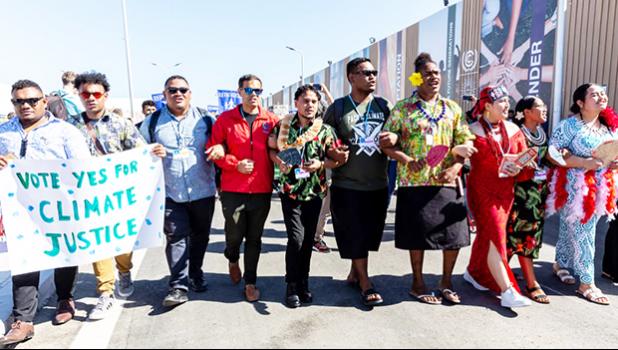 Sharm el-Sheikh, EGYPT — Pacific climate activists have challenged the United States' assertion at COP27 that it is a 'global climate leader'.

President Joe Biden announced commitments to accelerating his Emergency Plan for Adaptation and Resilience, including a further $US150 million in Egypt.

He spoke of using public finance to unlock billions in private investment through the 'Climate Finance +' initiative to support global south countries in issuing green bonds.

And Biden said the US would meet its climate commitments, reiterating America's role as a climate leader and highlighting the recent passage of the Inflation Reduction Act.

However, 350.org executive director May Boeve said to be a true global climate leader, the US needs to own their responsibility and pay up what is owed for adaptation, stop funding fossil fuel projects and commit to real and significant investments in loss and damage in support of the most vulnerable nations.

Africa Regional Campaigner for 350.org Charity Migwi added as one of the world's leading polluters, the pledges made by the US fall well short of the expectations of communities facing devastation from the impacts of the climate crisis.

She said real climate action from a "climate leader" would entail phasing out fossil fuels, providing much needed loss and damage finance and supporting the just transition to renewable energy in Africa.

Pacific calls "we are not drowning, we are fighting"

Meanwhile, hundreds of climate change activists across the Pacific and Egypt have taken to the streets, calling for real action by world leaders at COP27.

From the island of Rabi in Fiji, to Melbourne in Australia, and to the Blue Zone in COP27, Sharm El Sheikh - the resounding message from the Pacific is that "we are not drowning, we are fighting".

"Governments are refusing to step up and act in the interest of the people and, as a result, the world's poorest and most vulnerable communities continue to suffer whilst they have the least responsibility for causing it."

Sikulu said keeping global heating below 1.5 degrees Celsius is non-negotiable for the Pacific.

"We refuse to let up the pressure on global leaders at COP27 because this is a matter of survival for our islands. Our Pacific negotiators going into next week's ministerials (meetings) are fighting an uphill battle against Goliath nations that are stalling for time and continuing to block the climate action needed for our survival.

"In the Pacific, we are facing the increasingly devastating impacts of climate change - tropical cyclones are more frequent, ocean temperatures threaten our marine ecosystems and rising sea levels eat at our shorelines.

"Our brothers and sisters here on the African continent face drought and famine while greedy corporations strip their land for more oil pipelines. It is appalling that the leaders of wealthy nations present at COP27 ignore these realities and ignore the clear science of climate breakdown.

"We march for climate justice, for human rights justice and to lift up the voices and demands of frontline communities in the Pacific and the rest of the world. We are not drowning, we are fighting."

Environmental NGOs, women and gender constituency, indigenous peoples organisations, trade unions, and Children and youth NGOs joined the COP27 coalition on the Global day of action to organise the march that took place within the Blue Zone.