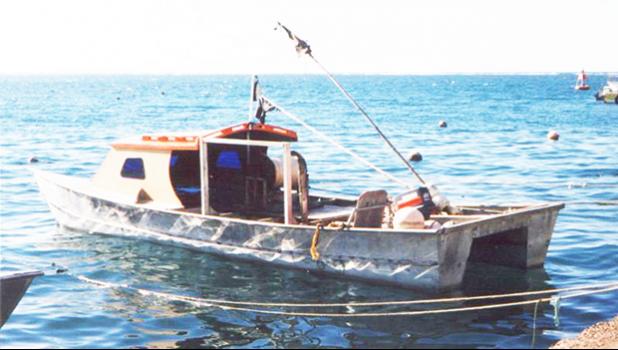 Pago Pago, AMERICAN SAMOA — The dispute between local alia fishing boat owners and operators and the American Samoa Government (ASG) has come to an end after the Trial Division of the High Court of American Samoa concluded that ASG is liable to plaintiffs (owners and operators of local alia fishing boats) for damage sustained to property and livelihood.

The dispute between five local alia fishing boat owners and operators against ASG started two years ago after three local alia owners filed a lawsuit against ASG for causing damage to their fishing alia.

Charles V. Ala’ilima represented the plaintiffs while attorneys from the Attorney General’s office represented ASG, which owns and operates the marine railway and dry dock facility (MRW) at Satala.

Plaintiffs filed suit against ASG commonly complaining that MRW variously caused corrosive damage to the aluminum hull plating and structure of their respective alia, which they had turned in to MRW under an ASG sponsored alia-refit-program, during the latter part of 2017 and early 2018.

According to the court order, the backdrop to this dispute begins with ASG securing from the federal government, through its Department of Marine and Wildlife Resources (DMWR), a Financial Assistance Award in 2014 in the mount of $999,000 to address the harm suffered by the territory’s bottomfish fishery that collapsed after the 2009 Tsunami. The award included certain relief to alia owners.

As it turned out, plaintiffs and other qualified alia owners were offered a variety of vessel repair work, the extent of which was subject to a budget ceiling set by DMWR, of $120,000 with MRW providing the repair work.

An ensuing series of meetings with interested boat owners was then convened by DMWR to scope out a needs assessment from the participants and to explain to them the pertinent parameters of the award program.

The ASG work offer was well received. Plaintiffs turned in their vessels one by one to MRW after meeting with its management and workmen to point out each desired repair.

As it turned out, the MRW boat-repair undertaking at Satala proved for plaintiffs to be an unmitigated and prolonged disaster.

On the other hand, the alia boat owners in Manu’a who participated in the award’s repair program had a more satisfying outcome.

A local boat builder, Maselino Ioane renowned among the community for his fabrication and repair work on alia and fautasi testified during trial that DMWR sent him to the outlying Manu’a Islands in 2018 to repair 10 alia, five in Ofu and five in Tau, of the standard 28 foot size craft.

His restoration work involved dismantling the alia’s superstructure, stripping the old aluminum hull plating, and then rebuilding the hull and framing with brand new aluminum sheeting. He then made repairs to the superstructure, the cabin, decking, safety railings, and the main outboard engine beam (transom). For services rendered in Manu’a, Maselino billed DMWR $25,000 per alia.

When asked on cross-examination by defense counsel as to the continuing seaworthiness of those aging alia he had worked on in Manu’a, Maselino responded by saying that he has on occasion observed the Manu’a vessels here in Tutuila picking up supplies.

He also testified that he was surprised when contacted by DMWR while he was in Manu’a to do additional repair work on alia in Tutuila, which he had understood were originally destined to be done by MRW.

As to MRW’s repair work on the alia in Tutuila, plaintiffs were in solidarity with their evidence, they each turned in seaworthy craft to MRW and got back, without exception, leaky and unseaworthy boats whose aluminum parts were visibly deteriorating with hull corrosion especially below the water line.

The evidence showed that MRW offered to, and did, apply an antifouling blue paint to the hull of each alia with the assurance that the paint job would make the hull last longer.

One alia owner, Lolisio testified and said the bottom of his alia was paint free; however, he went along with the paint job on MRW’s assurance of its long lasting benefits. However, after his vessel was returned painted with a blue antifouling coating below the waterline, he soon noticed thereafter that the blue paint appeared to be breaking out in blisters that subsequently deteriorated quickly with metal corrosion. He stopped fishing fearing for his safety and for those who fished with him.

Two other alia fishing boat owners, Maea and Sotoa suffered the same corrosive damage with their vessels after their boats were returned from MRW.

Maea resumed fishing after receiving his repaired alia from MRW, however, he had to stop fishing also after dry-docking his alia and discovering the extent of the hull damage his vessel had suffered. Sotoa experienced a similar ordeal with his fishing alia, a larger 31-foot vessel.

Another plaintiff, Dunham stated that he noted his vessel’s foredeck had also suffered the same sort of corrosion visible on its hulls. Dunham, who had previously worked at the MRW shipyard during the 80s under stewardship of Mr. William Sword, testified that the shipyard during this time had handled numerous aluminum vessels without the sort of complaints that he and his association members were having to deal with in court.

When Dunham confronted MRW’s CEO Moefaauo [Bill Emmsley] complaining that aluminum vessels were not supposed to be abraded by sandblasting but should be cleaned by power washing and aluminum surfaces were not to be coated with antifouling applications used for metal hulled vessels but with special primers and antifouling paint, the COE’s response was one of rage.

General Manager of Industrial Gases (IG), Andrew Wearing testified and said that in terms of antifouling paint IG used on the aluminum hulled boats, he emphasized that a copper-based antifouling paint, while suitable for steel and fiberglass hulls, cannot be applied to aluminum surfaces as copper and aluminum in a seawater environment results in rapid corrosion.

Sean Gregg, who owns a commercial diving company, Atlantic Pacific Marine, and a marine survey business, Pacific Maritime Survey (PMS) testified in court and said that some of the plaintiffs had sough him out in 2018 to inspect damage visibly seen with the hulls of their alia, following their being put back into the sea after MRW’s repair work.

The evidence shows that MRW’s initial responsive tact to the numerous complaints of damage by Plaintiffs was to literally cover over the problem with another coat of black paint, after conceding problem with the blue antifouling paint.

When this measure failed to stem the corrosion and stop plaintiffs barrage of complaints, MRW appears to simply opt out of responsibility. Consequently, the affected vessels continue to be parked on-land at DMWR’s small boat dock, pending remedial action from ASG and its involved agencies.

Discussions between DMWR, MRW and plaintiffs to find a solution to the dilemma at hand took place and the decision was to cancel the repair contract with MRW.

The plaintiff’s argued that while the whole premise of the award was ASG’s regeneration of the territory’s failing bottomfish industry owing to tsunami related ruin, the continuing decommissioning of five fishing alia on Tutuila with its corresponding prejudice to the livelihood of its five boat owners, must undeniably be antithetical of the award’s underlying purpose.

After hearing all evidence of the case, the court concluded that ASG is liable to plaintiffs for damages sustained to property and livelihood.

First, the consistency in outcome with MRW’s repair work on all five plaintiffs vessels speaks volumes in support of plaintiffs meeting their burden of proof on the preponderance of the evidence. As a result, plaintiffs’ vessels suffered corrosion and have effectually been rendered unseaworthy.

Second, ASG accepted using the wrong antifouling paint which resulted in the corrosive damage to plaintiffs individual alia. This conclusion was corroborated by the testimony of those plaintiffs who took the stand, as well as by the testimony of Maselino, Wearing and Gregg, whose combined experience working and/or dealing with aluminum vessels bore out as much.

While neither Maselino, Wearing nor Gregg, talked technically in terms of any underlying electrochemical process giving rise to the corrosive effect of mixing aluminum and copper, or indeed any dissimilar metals, in a salt water environment, the court found their combined and credible work experience with aluminum craft to greatly assist the court in its fact-finding role.

The immediate problem with this theory is that DMWR's administrative role under the grant vis a vis plaintiffs entails a wide latitude of discretion. No evidence to the contrary was presented by plaintiffs to show any contractual constraints on ASG to specifically provide alia repairs.

On the other hand the plaintiffs’ cause sounding in tort is available under the provisions of the Government Tort Liability Act and the court notes that the prerequisite administrative claims by plaintiffs mandated by the Administrative Code have been filed and have been properly presented with the Attorney General's Office. Moreover, the court is satisfied that plaintiffs' claims are now deemed denied having gone unanswered by the Attorney General "within 3 months after [they were] filed”.

Accordingly, plaintiffs will have judgment for damages against ASG.