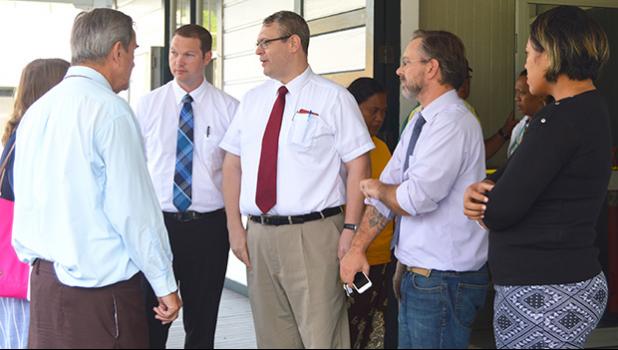 Defense attorney says it wasn't him, it was his office clerk
By
Ausage Fausia
ausage@samoanews.com

Pago Pago, AMERICAN SAMOA — Associate Justice Fiti Sunia issued an order last week, barring all counsels, their representatives, agencies, or acquaintances who were involved in Thomas Siaumau’s trial from contacting any and all members of the jury unless by order of the court.

Siaumau was back in court last Friday morning for a Status Hearing — two days after he was convicted by a six-member jury of shooting at a police vehicle on Dec.14, 2017 while a police officer was inside.

Defense attorneys, Richard deSaulles and Daniel Holladay appeared for Siaumau, who was also present, while Assistant Attorney Generals Christy Dunn and Laura Garvey appeared on behalf of the government.

When Siaumau’s case was called, Sunia explained that there was an unexpected development on Thursday — the day after the trial — with respect to the jurors who heard Siaumau’s case.

Sunia then called Court Marshal Michael Nix to the witness stand and asked him to explain what happened that day.

According to Nix, he was at the District Court and when he returned to High Court, a clerk informed him that one of the jurors had been trying to contact him.

He then checked his phone and discovered several missed calls. When he called the number, one of the jurors informed him that an attorney in the case had been trying to get a hold of her to ask questions. Nix said he assured the juror that he would find out what it was about.

A few minutes later, the same juror called again and said a secretary from RDA Law Firm had called her again, saying she wanted to ask her questions. Nix said another juror called him and reported the same problem.

“After I received the call from the second juror, I told this person that I will get to the bottom of the matter,” Nix said.

He then called attorney Richard deSaulles and inquired about the calls.

(deSaulles was the lead defense attorney for Siaumau during the trial).

deSaulles told Nix that the attorneys had nothing to do with the issue, and it was a clerk by the name of Lapu from his office who had contacted the jurors.

Lapu had been in the courtroom throughout Siaumau's trial. She was also present in court during this particular proceeding.

Nix said he then told deSaulles not to make any contact with the jurors anymore.

Sunia said the court will accept the marshal’s testimony in lieu of an affidavit so there is a record of what transpired. He added that the court does not want to take the matter to the next level; however, it will issue an order banning all counsels, their representatives, agencies, or acquaintances involved in the Siaumau trial from contacting any and all members of the jury unless by order of the court.

“This is a sanctionable order,” Sunia said.

He also ordered all attorneys who were involved in the Siaumau case — defense attorneys deSaulles and Daniel Holladay, and prosecutors, Assistant Attorney General Christy Dunn and Laura Garvey — to stay behind for a meeting in chambers after he cleared his court calendar that morning.

“If you want to do that, it will be done in the presence of an official of the court,” Sunia said.

He said that in common law, attorneys are not allowed to contact any jury members in an effort to impeach any verdict, and the common law is vey clear on the issue.

Sunia said he will issue a written order later on.

Defense attorney deSaulles requested an opportunity to speak, but it was denied by Sunia.