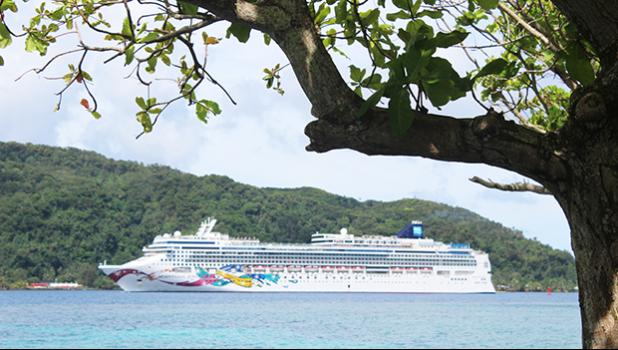 Pago Pago, AMERICAN SAMOA — After being refused entry into other ports in the South Pacific, the cruise ship Norwegian Jewel , which has been floating at sea for days with more than 2,000 people on board, made a “refueling” stop in Pago Pago Monday afternoon.

International news agencies report that the cruise ship has no confirmed cases of coronavirus, or COVID-19, however Pacific countries were concerned about the possibility and for that reason refused to grant port entry into their countries.

The stop followed an emergency assistance request by the US Coast Guard, through Captain Arex B. Avanni, Sector Commander, of the United States Coast Sector in Honolulu to Gov. Lolo Matalasi Moliga.

In a statement Monday afternoon, Lolo explained that  according to Capt. Avanni, “the Norwegian Jewel could not enter Fiji, French Polynesia and every other country in the region with refueling capacity” thus American Samoa was the last hope for the vessel to obtain fuel.

The governor added the “Norwegian Jewel Cruise Ship did not have enough fuel to make the trip to Hawaii and there are 749 U.S. citizens on board.” He said that he authorized the cruise ship to obtain fuel to ensure it safely reaches Hawai’i.

The local Department of Health travel advisory effective Mar. 9th states among other things that all cruise ships will not be granted entry into Pago Pago. It’s one of the measures the local government put in place to prevent COVID-19 from reaching the territory after reports from off island confirmed cruise ship passengers catching the virus.

“I could not or would not in all good conscience turn my back on Americans in distress given that the Territory of American Samoa is part of the American Family in spite the great risk to which our people are being subjected to by this decision,” Lolo said about making this decision.

He said his decision is “emboldened by the assurance” from the Coast Guard that “no passenger will be allowed to disembark during the period of refueling.”

US Coast Guard Marine Safety Detach Unit American Samoa supervisor Lt. Ryan Junod said Monday that the cruise ship coming here is for “emergency fueling only” and US Coast Guard Captain of Port Honolulu — which has jurisdiction over American Samoa  — has “restricted” all persons to remain on board.

Lt. Gov. Lemanu Palepoi Sialega Mauga has been tasked to “ensure that safety protocols are implemented to contain any potential for the coronavirus transmission and to set a Containment Zone to prevent any exposure by our people but particularly those employees who will be involved with the refueling operation,” Lolo said.

The governor have also ordered police officers to stand guard at a Containment Zone “throughout the duration of the refueling process to ensure that no passenger will disembark the vessel. Sea patrols will also be activated to prevent anyone from leaving the vessel.”

It’s unclear as to when fueling will begin, but local officials said more than 250,000 gallons of fuel will be pumped into the ship and refueling will take about 36 hours, with a current estimated time of departure as Wednesday morning.