Dana Love-Ili celebrated as 2017 Territorial Teacher of the Year 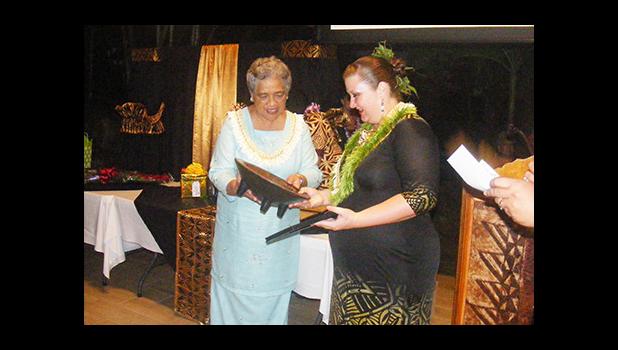 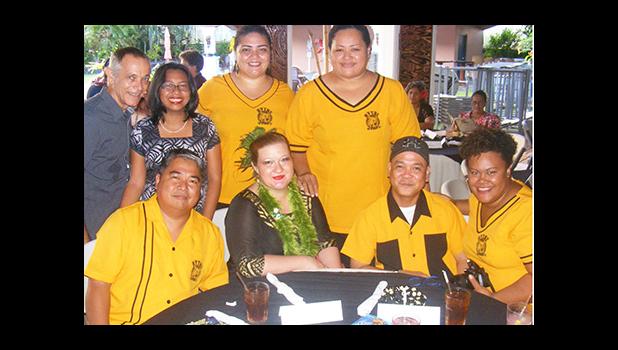 Educators, administrators, family members and others gathered last Friday evening to celebrate and honor the 2017 Territorial Teacher of the Year (TTOY), Dana Love-Ili, who says that teaching was always in her heart, although at the outset others influenced her to look at other professions, because teachers are not appreciated — and are underpaid.

Some 100 people attended the celebratory event at the Tradewinds Hotel Pavilion, where Love-Ili was described by ASDOE’s head of Teacher Quality Office, Diane Ameperosa as the “Ambassador for all teachers of American Samoa.” ASDOE acting director Philo Jennings, who offered welcoming remarks in Samoan, also cited a Samoan proverb, which he translated, “The sun has slowly settled, just how a pigeon would flutter to its nest.”

“The galaxies have flashed across the skies, the stars are shining brightly in the sky, and the evening stars are singing, rejoicing,” he said amid an early evening of clear skies as stars have started to appear. “Singing to this special occasion.”

Love-Ili is a Special Education teacher at Nu’uuli Vocational Technical High School (NVTHS), whose principal, Tupa’i Rod Atafua told the gathering that “the best teacher... teaches from the heart, not from the book.”

“The impact of such act by such teacher embodies, and amplifies their work,” he said as part of her introduction of Love-Ili, who is the second teacher from NVTHS to be the winner of TTOY and is the daughter of Philip and Teuila Love. Additionally, Love-Ili is married and a mother of three and she is expecting twins next month, Tupa’i said to applause from the audience about the expected twins.

The TTOY 2017 holds a Bachelor degree in Education as well as a Special Education certification and a Master’s degree from Argosy University- American Samoa campus. She has been an ASDOE teacher for 10 years and 8 of those years she taught at NVTHS. “She’s committed to her work, she’s very passionate about her students,” Tupa’i told the audience which included Love-Ili’s family members.

In her speech, which started out with a Samoan salutation, Love-Ili said she is humbled and honored to be the TTOY 2017. “My journey to this day, was a long and strenuous one. For as long as I can remember, I knew in my heart that I wanted to be a teacher. I heard God whisper this calling of teacher to me, but I chose to ignore it,” she explained.

“I was influenced by comments from people — such as ‘teachers are underpaid’, ‘teachers are unappreciated for what they do’, [and] ‘there is no future in being a teacher’,” she said, adding that she then sought out other professions, in her mind, deemed successful — such as doctor, lawyer, and businesswoman.

After graduating from ASCC, she went on to the University of Hawai’i- Manoa in Honolulu. “While I was there, I changed my major every semester. I was lost, confused and met failure at every corner,” she said. “Like Jonah from the Bible, I denied my calling. But as we all know from that story, we can never run away from God’s call. So I was swallowed by a whale and spit back on the shores of American Samoa.”

Upon returning to the territory, she applied for Special Education and was hired immediately. “Talk about divine intervention. It was then for the first time in my life, I felt I was exactly where I was supposed to be. I was complete,” she said.

“When I reflect back on where I was and where I am today, I am in awe and wonder of God. I see that nothing in my life was by chance — people I had met, choices I had made, everything that had ever happened to me, even the hardships, were all part of a grand design that led me to becoming the teacher that I am today,” she said.

She expressed appreciation to many, including her family, who helped her through her journey as an educator. She also thanked all her fellow teachers and administrators, who “have influenced me in my teaching career. Without your friendship, collaboration and challenging me, I would not be the teacher I am today.”

She acknowledged the work of the TTOY selection team, saying that, “I know my competitor June Seiuli [the 1st runner up] is a very talented and committed teacher. And I’m sure deliberating between the two of us must not have been easy.”

As part of the ceremony, 15 former teachers of the year, who are currently working at ASDOE, were recognized. The evening included Samoan siva for each division as well as the former TTOY, before dinner was served.