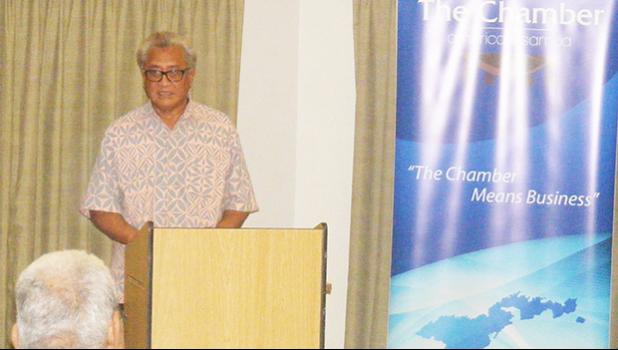 Due to internet costs in American Samoa, Datamatics, the company looking to set up a local business process outsourcing (BPO) operation — similar to a call center — has opted out of the territory, despite the local government’s tax breaks, according to Commerce Department Acting Director, Keniseli Lafaele, who noted that ASG continues to work on attracting US technology based companies to the territory.

Lafaele made the revelation about Datamatics during the government’s presentation on local economic development at a Chamber of Commerce general membership meeting Wednesday night. The presentation was a joint one between DOC and the Governor’s Office, which was represented by the governor’s executive assistant Iulogologo Joseph Pereira.

The status of Datamatics came up when Lafaele spoke about the Information and Communication Technology (ICT) industry, which he says “is something that we believe can be a game changer in the development of our economy.”

He described the ICT industry as the “greatest opportunity for new industry and strong job creation.” Based on information on his presentation, the government is looking at the third quarter of 2017 for construction of the ICT Industry Business Incubator, but didn’t provide a site on island for the project.

While all those efforts are great in getting the Internet moving forward in American Samoa, “it did not produce the broadband that we need to entice technology based industries,” Lafaele told Chamber members. “With all that development, we still have one of the most expensive [internet costs] in the world.”

He pointed out that Datamatics, the company that was close to opening shop in American Samoa, late last year, “did not opt to go with us because...i t was just too expensive” when it comes to local internet costs.

“Even with all the tax breaks that we would give them, all the breaks that they asked for [and] we gave them, but this was the breaker — the cost of the Internet,” he said.

“I believe that when all of them come into play, we will have very competitive Internet rates. At that time the US based companies will be looking at us to be based here,” the acting DOC director said, adding that ASG is not waiting until internet costs come down, as “we’re working on enticing those technology based companies to come here.”

It works well with US President Donald Trump’s idea of relocation for some of the foreign based branches of US companies back to US soil — and American Samoa “is US soil,” he pointed out, and “that’s what attracted Datamatics to us, this is US soil and the service that they provide” is to keep data strictly on US soil.

And “that’s what sold them to us, US soil. They came here twice to try to set up,” Lafaele said, but “the deal breaker was the cost of the internet.”

He later told Samoa News that it was Datamatics’ plan to first start out with 50 jobs and in the second year perhaps add 100 more jobs and build up to 2,000 employees over a period of five years.

“So that was their plan. But it’s just that they couldn’t make it with the cost of Internet here,” he said. “But we’re keeping them at arms length. The moment that we have our Internet cost... brought down to a competitive level, we’ll re-engage them.”

Samoa News will report on other issues from Lafaele’s presentation in future editions.

As previously reported by Samoa News, the Tui Samoa cable is expected to be launched the end of this year; while Moana Cable and Hawaiki by next year. Additionally, the Bluesky group is one of the shareholder investors of the Tui Samoa Cable.