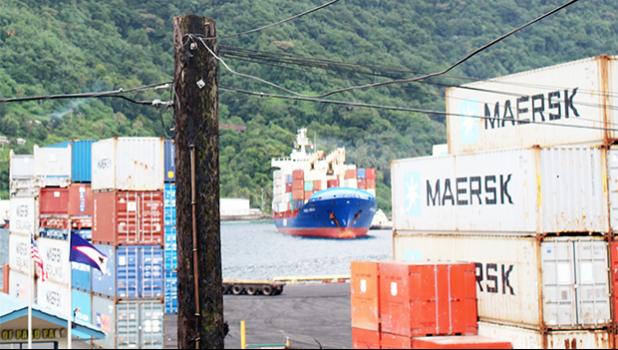 Pago Pago, AMERICAN SAMOA — Cargo vessels including those for StarKist Samoa, as well as fishing fleet supplying fish for the cannery, are exempted under the governor’s COVID-19 emergency declaration.

This message was emphasized by ASG’s COVID-19 Task Force chairman, Iulogologo Joseph Pereira responding to media questions yesterday following reports that at least two cargo vessels were drifting outside of Pago Pago not allowed to enter per orders of the ASG Health Department.

Just before 12 noon, as this story was developing, the container vessel, “Fesco Askold” pulled into the Port of Pago Pago. Information received by Samoa News states that this vessel was to enter the port late Tuesday afternoon but remained outside allegedly per orders of DoH.

An online service that tracks vessels’ movements showed that the vessel was to arrive in Pago Pago on Apr. 7th.

About 90-minutes later, a second vessel  “Liloa v044” — lined up to dock at the main docking area.

According to information received by Samoa News, the “Liloa v044” which was also bringing supplies for the canneries was to enter the port early this week.

Samoa News informed Iulogologo yesterday morning about the “Liloa v044” as well as reports of other cargo vessels drifting outside Pago Pago allegedly per orders of DoH.

Asked if there’s a new change implemented by the government pertaining to incoming cargo vessels including those for the cannery, Iulogologo said the “entry of cargo vessels and fishing boats contracted with Starkist are exempted” in the emergency declaration.

“The Governor wants to make sure that our supply chain and food security is not interrupted. Until such time as the provisions of the 3rd Amended Declaration are changed through another amendment, the cargo vessels, and fishing vessels supplying fish to StarKist are allowed to enter our harbor and off-load their cargo.”

In follow-up questions, Iulogologo re-emphasized that the 3rd Amended Declaration “exempts cargo vessels to come in” and this “was made clear” to DoH and Port Administration.

It’s unclear at press time as to why DoH took such action on these vessels.

This Samoa News phots taken yesterday shows the aft section of the container vessel, Iloa v044 as it finally docked at the main port before 1:30pm. [photos: FS]