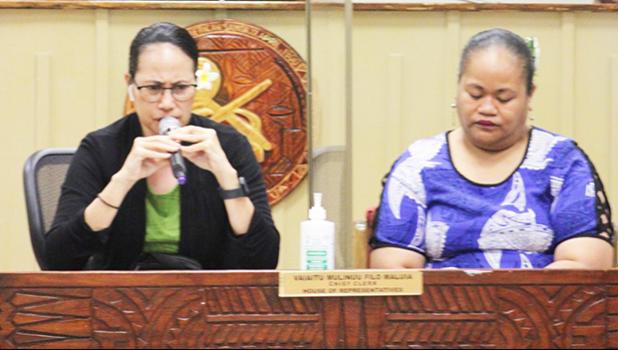 Pago Pago, AMERICAN SAMOA — The House of Representatives heard first hand an update from the Department of Public Works on school building projects around Manu’a, Tutuila and Aunu’u.

In a House hearing held this past Friday before the Public Works Committee, DPW Director Faleosina Voigt gave a rundown on the status of the school building projects as well as road projects.

In Manu’a, Paramount builders is currently pouring the foundation for an Olosega school building and the project has eight months on its contract. The director said she believes the company has the ability to finish the project on time. There are also plans for a gymnasium for Olosega Elementary School.

For the Manu’a consolidated school project underway now, 40 percent of the foundation is complete and its a one story building.

“There are also plans of a new two-story building for the Manu’a High School in Ta’u.”

For Aunu’u, Mrs Voigt explained there is also a school building project and the seawall project for the Aunuu Wharf, but more information on the wharf project should be available from Port Administration.

According to the director there is a new two-story building for Fagaitua High School, which will include a JROTC classroom.

Furthermore, the government is looking for land for a new football field for Fagaitua High School.

In Alofau, the current basketball court will be turned into a building for school and it will include a cafeteria.

The current location of the cafeteria is not safe as it’s close to a stream in the village.

Aoa Elementary school has been closed down while a new school building is being built with plans to have a gymnasium.

“Aoa students are currently attending a nearby school which is helpful in expediting the project,” explained the director.

Regarding the school building project in Vatia, it’s currently on hold.

“This is due to land dispute and negotiations are underway now and hopefully they will settle it soon and the project will continue.

“For Afono there are plans for a new two-story building, which should house a new cafeteria for the students. However, “the cafeteria is next to a stream and it’s deemed unsafe. “Also the government has plans to build a gymnasium for Afono,” said Voigt.

Regarding infrastructure projects, the DPW director explained that between Tula and Alofau, work is underway on the roads, and also sidewalks and a seawall for certain areas.

“Furthermore there are plans to resurface the three-way intersection between Amouli and Aoa and also there are negotiations underway to have a road connecting Sailele to Aoa,” she said.

She also noted that there will be a seawall for Sailele.

The government is looking at resurfacing the main highway in the village of Masausi.

For Pago Pago, Voigt said they are looking at building a new two- story structure, and have plans for a multipurpose gymnasium for the Fagasa elementary school.

For campus improvements in the vicinity of the schools, the director said they have completed Aua school, and Samoana high school improvements are underway.

She said there is a list of schools that require campus improvements in the vicinity, which includes Matafao, Pava’ia’i Elementary, Nu’uuli Vocational Technical High School and Tafuna high school.

Resurfacing projects on the main highway, as evidenced in Nu’uuli — the completed segment includes sidewalks on both sides, and this project will continue all the way to the roundabout to the Airport said Voigt.

“We also have plans to resurface the road up to Aoloau and Siliaga and parking lots in the schools and village roads in Mapusaga.

“The inner road projects behind the golf course and Fatu o Aiga are complete.”

According to the director there are projects underway for Lupelele Elementary School and Manulele, and will include a special education building as this school’s gymnasium has been completed recently.

Back to Pava’iai, the director explained two new two-story school buildings have been completed and the government plans to tear down the old buildings and in that space there are plans for a new gymnasium.

On the far west of the island, at Midkiff elementary school, two new two- story buildings are underway, with a third two- story building planned, which will house a cafeteria for the school given the increase in the enrollment of students in that area.

Road resurfacing in Amanave all the way to Fagamalo is complete but they have plans to remove the current ford at Maloata and replace it with aculvert, a structure that channels water past an obstacle or to a subterranean waterway.

“The contract has already been awarded for the Maloata culvert project it’s just a matter of constructing it,” said the director.

The road in Poloa has already been resurfaced.

The director explained work is underway from the intersection at Nu’uuli going into Lions Park.

“From the intersection it goes through behind the jail and in front of the juvenile detention center and it will go through Agriculture. That will be another loop road to be opened and resurfacing from the industrial road to the junction of the McDonald’s warehouse.

“The road work behind the Catholic Church is completed and we have awarded the contract for the Taputimu road, we are just waiting on paperwork in terms of the bond.

The director said this is in line with the governor’s island wide infrastructure push.