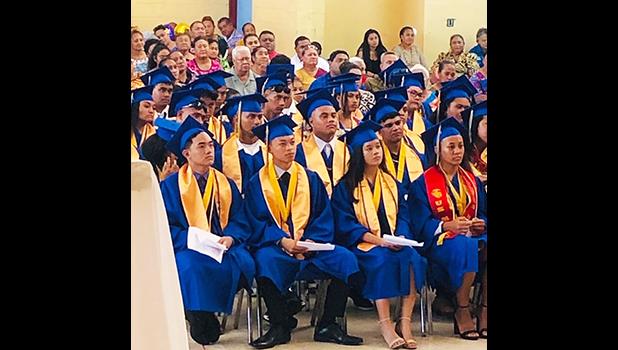 Pago Pago, AMERICAN SAMOA — In a spirited commencement ceremony, 48 seniors of Faasao-Marist High School congratulated and cheered each other on as they received their diplomas and graduated, during a 2-hour celebration held Saturday morning, June 8th, at the Fatu-O-Aiga Hall.

The theme of the Class of 2019 was: “Trust in the Lord with all your heart, on your own intelligence do not rely. In all your ways be mindful of him and he will make straight your paths” Proverbs 3:5-6

This year’s graduation coverage is sponsored by local company Paramount Builders, in the spirit of community service and commitment to education.

Attorney General Talauega Eleasalo Ale represented the government. In his special remarks, he  noted that Catholic education offers special tools for students. He pointed out that he is a graduate of Marist High School, adding that the Lolo-Lemanu Administration encourages all graduates to come back home after their studies — as they are American Samoa’s future.

Invocation and benediction were offered by Rev. Fr. Vaiula Iulio.

With the Class of 2019’s theme in mind, both commencement speaker Diehl Langkilde and valedictorian Carl Balauro spoke of live-changing ordeals, overcoming adversity, and of each experience changing their life’s path — and by putting their faith in God moving forward into a fulfilling future.

Langkilde spoke of his ordeal when he was buried alive for 3 hours in a mudslide that happened in Fagatogo in May 2003; and the five operations he had, in order to walk again. Through it all, never giving up — an effort of faith, which ultimately changed the path he chose to walk. Sharing his own love of life through teaching, coaching sports, and working at KSBS as production manager and DJ.

For Balauro, he brought to light his own life-changing ordeal which highlighted domestic abuse that ended when his father walked away from his family. He pointed to his family — his mother, his sister, and aunts — and other women such as Mrs. Park, House Rep. Andra Samoa —  that all became his role models. Balauro said, “Live in the moment” because your future is steered by your daily decisions and embrace the storms in your life.

Salutatorian Denson Javier graduated with a GPA of 3.95 and will be studying nursing at ASCC. His ultimate goal is to become a medical doctor.

Awards were presented after the presentation of diplomas.