Family files charges against teacher who allegedly assaulted their son 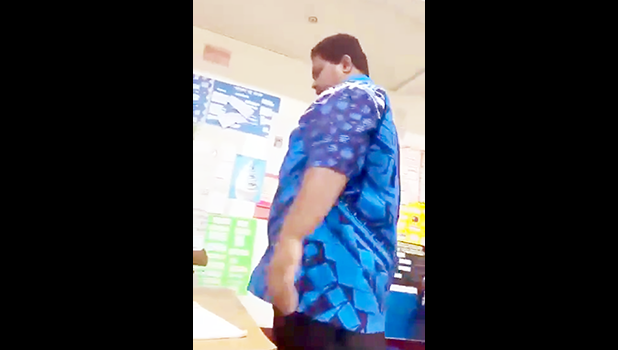 Video that went viral on Facebook brought the incident to light
By
Ausage Fausia
ausage@samoanews.com

Pago Pago, AMERICAN SAMOA — A teacher from Faasao Marist High School (FMHS) shown in a video allegedly assaulting a student was fired after the video of the incident went viral on Facebook over the weekend and police are now investigating the matter after the family of the student filed a criminal complaint.

The victim’s family confirmed to Samoa News that the victim’s statement was given to police on Saturday and they’re waiting on the next step regarding the incident.

An investigator at the Department of the Public Safety (DPS) told Samoa News that officers at the LPS are handling the investigation. He did not wish to comment further about the matter because it is under investigation.

The victim left island last week and he’s staying with family members on the U.S mainland. This was confirmed by the family in their official letter, requesting a meeting with the DOE Director, the Faasao Marist High School (FMHS), the teacher involved and the attorney representing the family and the victim’s sibling via a conference call or zoom meeting to discuss the matter. The copy of the letter was also sent to Samoa News by the family.

Samoa News received a joint statement, issued early Monday morning by the leader of the Diocese of Samoa Pago Pago, which operates the school, Bishop Peter Brown, Director of the office of Catholic Education Jeanette Alvarez and the new principal of FMHS Dr Lina Scanlan about the school’s latest move.

“Recently a video was posted online of a teacher from Faasao Marist High School physically striking a student. The policies of the Catholic Diocese of American Samoa and the Office of Catholic Education strictly forbids any form of abuse by its employees to students and the consequences of such behaviour include immediate dismissal. As per these policies, the teacher involved has been dismissed.

“The Diocese and the Office of Education have reached out to the student’s family to express our apology for this unacceptable behaviour of one of our teachers. The family has issued a formal complaint to the Department of Education of American Samoa and the Office of Catholic Education requesting a meeting of all parties involved.

The victim’s sister on behalf of the family issued a public statement regarding the incident, saying that the victim is the youngest of 5.

“It has been a difficult time for me and our family especially my brother for what he went through. It was horrible abuse of power by the teacher, the video speaks for itself. We've noticed the change in his behavior for the past year, he has skipped school, and is getting bad grades now. But that wasn't him at all before this happened, he was a straight A student and well behaved kid. He knew better not to be disrespectful to anyone older than him,” the victim’s sister wrote in the family statement.

“The teacher (mentioned in the family statement by name) abused my brother in front of every student in that classroom [and] that's outrageous and unacceptable. Rumors from the students are that he has physically assaulted another student before he assaulted my brother.

“And the School is threatening to expel the young student that took the video. It's outrageous that it takes a video to go viral on the internet to get the Bishop’s (principal's) attention. He should know the teachers that work in his school! Every parent trusts that our teachers care and are there to educate our children NOT physically attack and assault a child.

“I want everyone in American Samoa to be aware of what's really going on in our School system, there should be zero tolerance for violence in any way, and he (teacher) shouldn't be putting hands on any student for any reason. I'm certain that unfortunately this is not the first time he has done this. You can see the other students facial expression and body language as this assault was happening, it speaks volumes to what they go through on a daily basis.

“I hope and pray this exposure will put a stop to the abuse that's been going on for these students. And prevent any future incidents. The end goal here is for him to be held accountable for his actions, hopefully he gets fired from his current job and is not able to teach at all in any School and will go to jail were he belongs. Regardless of what happened, he should've never laid his hands on a student, it's the parents job to discipline their children. I hope this airs on the news outlet tonight. I was told you have a copy of the video.

“Please expose the poison and abuse these poor children have been going through in our School system we are supposed to trust, bring awareness in this matter. We also contacted the Police Department in American Samoa and are going forward with pressing charges against the teacher. They notified us that it has been an on going investigation at the moment, we are going to seek legal action against the School. If we don't get justice in this inexcusable situation or if it is ignored or allowed to continue our attorney will intervene.

“We need to address the issues NOW and hold adults accountable for their actions against a child. We demand answers and expect nothing other then solution to this inexcusable abuse of my brother. My family is disappointed and broken hearted we demand justice and answers. Ma le fa'aaloalo lava, fa'afetai,” the family’s official statement concluded.