Missing boy from American Samoa found with friends in Malaeimi 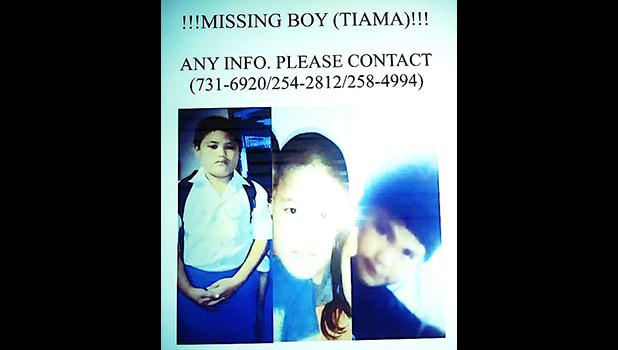 Pago Pago, AMERICAN SAMOA — The young boy who was gone missing from his family in Nu’uuli since last week Saturday, June 16 is now with his parents. The boy was found Monday morning and looked fine.

This was confirmed by his mother during a telephone interview yesterday with Samoa News.

An official from the Department of Public Safety also confirmed to Samoa News yesterday afternoon that the young boy who was missing since Saturday last week is now reunited with his parents and family. The DPS official did not offer any additional details about this case.

According to his mother, her son, who is the eldest of their children was at his friend’s house. His friend was the son of a faifeau (pastor) in Malaeimi.

The mother said her son went to buy a Samoan movie last Saturday to watch, but came back home unable to find a Samoan movie to watch. Her son then went to the store across from their home to buy ice-cream.

The boy was then taken to the Tafuna Police Sub-Station to wait the arrival of his mother.

“I thank everyone who prayed for the safety of my son. He was missing for 3 days because of his carelessness. He failed to notify us on his whereabouts. Thank God that he was safe.”

Posters were put up around the island, and a call out by the family on Facebook was also initiated about the missing boy.

The family said “We’re making Tiama go around all the island and take down all the posters and thank store owners/ policemen/ everyone for helping; and apologizing to them as well. Thank you God for bringing him back safe and sound.