Flags at half-staff to mark solemn respect for victims in U.S capitol 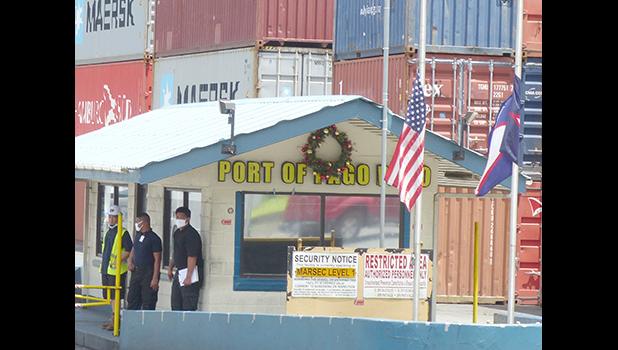 Pago Pago, AMERICAN SAMOA — The United Sates and American Samoa flags are flying at half-staff as of yesterday morning at the entrance into the Port of Pago Pago, as ordered by Gov. Lemanu Peleti Palepoi Sialega Mauga in a memo issued yesterday for flags be flown at half-staff as a “mark of respect for the victims of violence in the US Capitol” last week.

The governor’s memo is pursuant to the proclamation by US President Donald J. Trump that the flag of the United States be flown at half-staff until sunset on Wednesday, Jan. 13th “as a mark of solemn respect for the service and sacrifice of US Capitol Police Officers Brian D. Sicknick and Howard Liebengood who died in the wake of the attack on the US Capitol on Jan. 6th.

Samoa News notes that the Trump proclamation comes several days after the murder of Capitol Police Officer Sicknick by rioting insurrectionist at the U.S. Capitol on Jan. 6. According to national news media reports, the second officer committed suicide.

“As we reflect upon this tragedy and consider the loss of life and the impacts on the affected survivors, let us each take a moment to give thanks to our God for his continued blessings upon our Territory,” Lemanu said.

In his State of the Territory Address during yesterday’s joint Fono session at the Gov. H. Rex Lee Auditorium, Lemanu noted the call for lowering of the US flag pursuant to President Trump’s order following violence last week at the US Capitol.

Despite instability in the U.S, he said American Samoa remains peaceful with a strong Samoan culture.