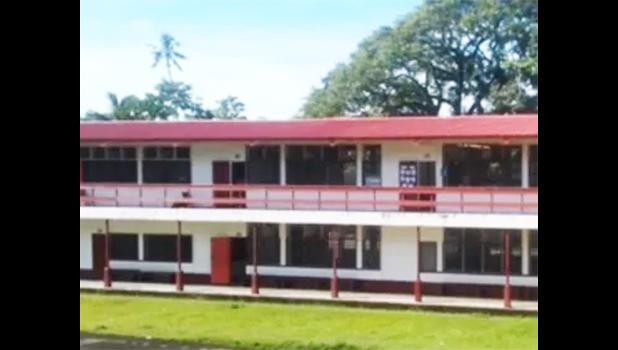 On June 5th, 2021, a man walked into the Leone Police Substation (LPS) to report that his little brother was assaulted by his teacher Mr. Roy Ameperosa.

Victim One, T.V who’s now off island, emailed his statement to investigators . He stated that Ameperosa got mad because he and his friend S.S (second victim) went outside to find a pencil without asking for permission.

When they returned, Ameperosa was very upset because they kept walking around. That’s when he got up and started beating up S.S first — he made his way to his desk and started hitting his left arm and the back of his neck.

Victim One also stated that the didn’t want to mention this to his family because of the fear of something like this happening. However, the video was posted and his family started questioning him, so he opened up and told them his side of the story. He also stated that all the students that were in that class (algebra) witnessed the incident.

Victim Two, S.S, stated to investigators through his written statement that they were walking around looking for pencils, and Ameperosa saw them from the office. So they went back to the classroom and Ameperosa asked them why they were skipping class and made his way to him (S.S) and started slapping him — twice with his open hand — and when he tried to explain it to Ameperosa, he (Ameperosa) made his way to Victim One (T.V) and started beating him up — hitting him twice with his closed fist. He also stated that this is the second time Ameperosa has done this — like he’s slapping his son.

Victim Three, L.V, was the girl that recorded the video. She stated in her written statement that T.V and S.S were walking around looking for pencils and Ameperosa caught them so they went back to their seats. Ameperosa then walked up to them and started beating them up, while they were trying to explain to him why they had been walking around, but Ameperosa kept punching/ slapping them.

He first went to S.S then came to T.V. According to L.V’s statement to investigators, she was holding T.V’s phone so she decided to record Ameperosa and show it to one of her best friends how Ameperosa beat up one of their other best friends. She didn’t record S.S because she didn’t even think that Ameperosa would do such a thing because they were only looking for pencils.

She also stated that she wasn’t the only who took a video.

Before questioning Ameperosa he was Mirandized due to the said matter.

Ameperosa stated to investigators in his written statement  that T.V came to class, where he instructed the class to write their notes on the board. Then he went to the office to print their seat work, he came back not knowing that T.V had already left the classroom without asking permission to go outside.

So he started his class and continued on with his lecture and that’s when he noticed that T.V was missing/ not in class and it had been almost an hour, T.V came back to the classroom and by that time most students had already finished their seat work.

He then approached T.V and tried to be serious because of the way he was acting. It made him feel embarrassed in front of the class, so he punched him and hit his hand and shoulder with his closed fist and then he advised the class not to go outside without permission. He stated that after class, T.V came to him and apologized for leaving the classroom without letting him know.

He verbally stated to investigators that he also slapped S.S with his open hand.

This matter surfaced after the video of the incident went viral on Facebook over the first weekend of June and police investigated the matter after the family of the student filed a criminal complaint.

Immediately after the video went viral, the school moved to terminate the teacher from the school.

The victim’s family confirmed to Samoa News that the victim’s statement was given to police on Saturday and they were waiting on the next step regarding the incident.

An investigator at the Department of the Public Safety (DPS) told Samoa News at the time that officers at the LPS are handling the investigation. He did not wish to comment further about the matter because it is under investigation.

The victim left island a week before the video surfaced and he’s currently staying with family members on the U.S mainland. This was confirmed by the family in their official letter, requesting a meeting with the DOE Director, the Faasao Marist High School (FMHS), the teacher involved and the attorney representing the family and the victim’s sibling via a conference call or zoom meeting to discuss the matter. The copy of the letter was also sent to Samoa News by the family.

Samoa News received a joint statement, issued later by the leader of the Diocese of Samoa Pago Pago, which operates the school, Bishop Peter Brown, Director of the office of Catholic Education Jeanette Alvarez and the new principal of FMHS Dr Lina Scanlan about the school’s latest move.

“Recently a video was posted online of a teacher from Faasao Marist High School physically striking a student. The policies of the Catholic Diocese of American Samoa and the Office of Catholic Education strictly forbids any form of abuse by its employees to students and the consequences of such behavior include immediate dismissal. As per these policies, the teacher involved has been dismissed.

“The Diocese and the Office of Education have reached out to the student’s family to express our apology for this unacceptable behavior of one of our teachers. The family has issued a formal complaint to the Department of Education of American Samoa and the Office of Catholic Education requesting a meeting of all parties involved.

The victim’s sister on behalf of the family also issued a public statement regarding the incident, saying that the victim is the youngest of 5.

In their statement, they pointed out that “it was horrible abuse of power by the teacher, the video speaks for itself.”

“We've noticed the change in his behavior for the past year, he has skipped school, and is getting bad grades now. But that wasn't him at all before this happened, he was a straight A student and well behaved kid. He knew better not to be disrespectful to anyone older than him,” the victim’s sister wrote in the family statement.

She continued, “I hope and pray this exposure will put a stop to the abuse that's been going on for these students. And prevent any future incidents. The end goal here is for him to be held accountable for his actions, hopefully he gets fired from his current job and is not able to teach at all in any School and will go to jail were he belongs.

“We need to address the issues NOW and hold adults accountable for their actions against a child. We demand answers and expect nothing other than solution to this inexcusable abuse of my brother. My family is disappointed and broken hearted we demand justice and answers. Ma le fa'aaloalo lava, fa'afetai,” the family’s official statement concluded.