FY 2021budget is what it is, according to Fono leaders, act on it 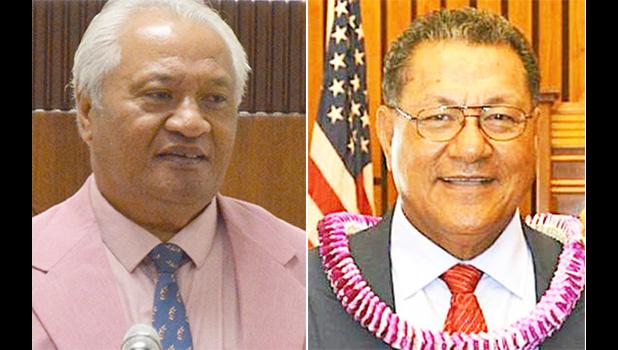 Legislature is “not confident” with ASG’s revenue projections
By
Fili Sagapolutele
fili@samoanews.com

Pago Pago, AMERICAN SAMOA — Fono leaders have informed Gov. Lolo Matalasi Moliga that the Legislature is “not confident with your [revenue] projections” and have urged the governor to act on the final fiscal year 2021 budget bill now in his control.

In their letter, the Fono leaders reiterated that the 15-day special session called by the governor is closed.

“As we previously stated, the Fono resolved to remain steadfast and reaffirm its position on the [FY 2021] budget,” they point out, noting that they accepted the governor’s notice calling a second-15-day special session.

“Regrettably, we have no item to deliberate as we have already made a final decision on the budget, the single item in the special session call,” according to a copy of the letter received yesterday by Samoa News.

The first call for special session convened the Fono on Oct. 2nd for 15-days and was set to adjourn today, Oct. 16th. The extended 15-day session would have the special session adjourn on Oct. 31st (which Samoa News notes is a Saturday).

“As you may already know, a bill not acted upon by the governor within 30-days is disapproved, by operation of law, if the governor is unable to return the bill due to adjournment of a legislative session,” Gaoteote and Savali  reminds Lolo.

Notwithstanding the various special session calls, the Fono leaders also reminded Lolo that the budget has been with the governor for more than 15 days.

“Rather than perform one of only three options available to a governor, you returned the budget citing your displeasure with actions taken by the Fono,” the leaders wrote. “As we have asserted, we do not doubt your desire to provide pay raises for employees of the government.”

The Fono leaders pointed out that “we all wish to improve the lives of our people by enhancing their livelihoods, in this case, an increase in their salaries.

“Our differences lie in how we arrive at this goal.

“We are not confident with the projections you provided in your proposal and is the primary reason for the cuts,” the Fono leaders stated.

The Fono cut $6.5 million in proposed revenues for FY 2021, and the governor said that the “anecdotal claim” by the Fono that ASG “had not realized its revenue forecasts in the previous years is irrelevant because economy dynamics change annually.”

Lolo further claimed that his “motives in submitting the FY 2021 financial plan are plain, pure and reflective” of his “burning desire to turn over to the next set of leaders a financially solid and operationally sound government.”

The Fono leaders in their Oct. 13th response letter said they agreed, and it was reflective of his (Lolo’s) “responsible leadership,” but their action was also about “our [Fono] fiduciary and sworn obligations to do so.”

The Fono leadership wrote that “despite the disparaging remarks made about the Fono, we remain undeterred. We will stay on the side of the law in spite of your admonishments.”

“The process to which we constantly allude is one that is prescribed by law and cannot be altered because one branch [of government] is displeased with its outcome,” they stated.

Once again, the Fono leaders urged the governor to act on the budget bill, which is in his control.

“Should you decide to disapprove the budget, in whole or in part, a new bill should be presented by the administration to address [the] funding gap it creates,” the leaders point out. “We further maintain that an executive order cannot extend the funding of our operations. This must go through the proper appropriations process.”

The governor’s initial executive order operating the government for 15-days under FY 2020 budget levels, ended yesterday and the governor had extended that order for another 15-days while awaiting a final decision by the Fono on the FY 2021 budget.

Savali had called a meeting yesterday morning with House members and the FY 2021 budget was the subject of discussion. Faipule who attended the meeting later told Samoa News that most of the lawmakers in attendance support the Fono stand — to keep the version it has approved.

Fono leaders met yesterday with the governor to discuss the status of the FY 2021 budget and Samoa News understands that the second-15 day special session is expected to start early next week. This was the outcome of the meeting.