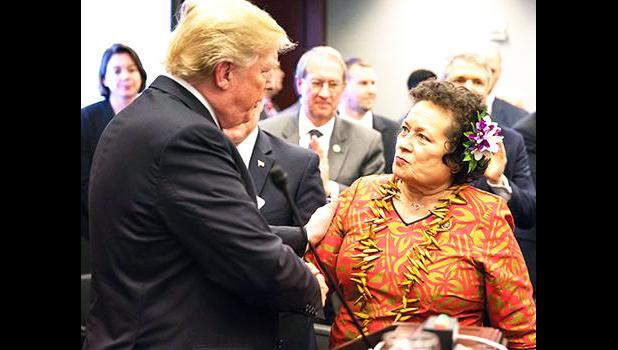 Pago Pago, AMERICAN SAMOA — Gov. Lolo Matalasi Moliga is hopeful that US President Donald Trump’s “change in fiscal and economic policies” will re-energize American Samoa’s economic environment, which continues to face uncertainty with StarKist’s loss of the federal tax credit, coupled with another federally mandated minimum wage hike that goes into effect at the end of the current fiscal year.

In accordance with an amendment to federal law, enacted three years ago, the next 40-cent minimum wage hike for all 18 different industries in American Samoa is effective Sept. 30, 2018.

In his cover letter to the Fono that includes the final proposed fiscal year 2019 budget, Lolo noted that the forecasted total of $98.69 million in local revenue collections for FY 2019, are predicted on the continued “maintenance of StarKist’s current production and employment levels.”

“If any of these two elements change downward, projected revenues will plummet reciprocally,” Lolo explained, adding that there are still revenue measures submitted to the Fono in FY 2018 that need consideration by lawmakers to help with ASG finances.

Lolo reminds lawmakers that the government has major projects including the new Fono building which require funding support, and finalizing revenue measures now before the Legislature “is critical”.

“We are exploring all potential revenue generating options to ensure that we secure additional revenues to finance our outstanding projects,” he said.

According to the governor, the future global economic forecast is strong with unemployment dropping as more jobs are being created in the United States.

“Economic forecast for our local economy is still guarded because of the uncertainty faced by StarKist,” he explained, adding that there “is also concern that the current trade war” between the US and China “might create some economic backlash”.

“While the signs of economic recovery are promising, American Samoa, unfortunately, is placed under the cloud of uncertainty,” he said and cited the following  reasons:

•    operating status of StarKist is being threatened by removal of the federal 30A tax credit;

•    continuing escalation in the cost of fish;

•    financial onslaught in the enforcement of environmental regulations; and

•    steady departure of fishing vessels from home porting in American Samoa because of the “frivolous and insensitive enforcement” of US Coast Guard rules and regulations, as well as environmental prohibitions.

In addition to negative federal policies, Lolo said StarKist is facing environmental challenges which could derail its expansion and might even cause reduction in employment or total closure of its operations in the territory.

The governor says these operating impediments, which are all federally imposed, undermine the competitiveness of StarKist with lower w age fish product processing countries around the globe.

“It is our hope that the change in fiscal an economic policies by the Trump Administration will reenergize our economic environment,” he said.

Lolo outlined what American Samoa “drastically needs” from the federal government — based on the reasons for the cloud of uncertainty he outlined.

He also explained, “It is our vision that our investment in the Hawaiki cable will create a diversification pillar to reduce our sole dependence on the fishing industry, pointing to local companies that are “pursuing the establishing of call centers which will certainly provide mass employment for our people.”

The American Samoa Economic Development Tax Credit (30(A) for the 2017 tax year was re-instated by US Congress in legislation passed in Feb. 2018.

The company’s president and chief executive officer, Andrew Choe, said at the time of its passage, “Without this 30(A) credit, it would not be economically viable to continue to manufacture in the American Samoan Territory,” adding that the cannery — the largest private employer in the territory — employs approximately 2,300 workers “and is a proud member of the American Samoa community since 1963.”

Of the need for a long-term extension, Choe said, “Economic relief that must be re-evaluated every year or every other year creates uncertainty and does not do what it can to incentivize investment in these distressed areas.”

Congresswoman Aumua Amata said in February of this year that she was working on this legislation, noting that while a “one-year extension is another good step in the right direction, a longer-term extension would allow for better planning and stability, so we will continue to make that case.”