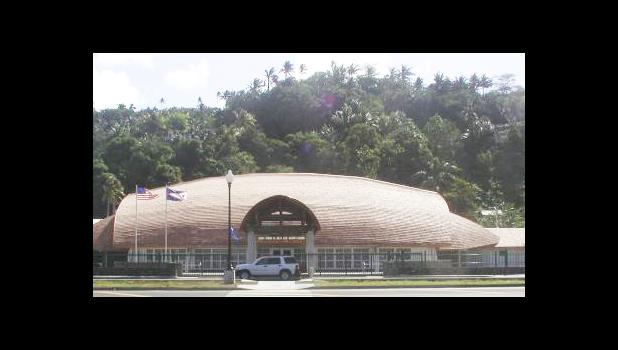 Pago Pago, AMERICAN SAMOA — With more than $15 million forecast in surplus funds from fiscal years 2019 and 2020, Gov. Lolo Matalasi Moliga says proposed legislation is to be drafted for the appropriation of this surplus for the construction of the new Fono building project.

The governor made the revelation at the cabinet meeting on Monday this week at the Gov. H. Rex Lee Auditorium but didn’t provide additional information on when he plans to submit such a bill to the Fono for review and approval.

The Fono is currently in its second special session called by the governor for an additional 15-days with only one issue on the agenda and that is the funding gap bill, to continue ASG operations for 30-days or until a final FY 2021 budget is enacted into law.

At the cabinet meeting, the governor said that ASG Treasurer Ueligitone Tonumaipe’a shared good news last week Thursday submitting a financial report for FYs 2019 and 2020, which shows a forecast surplus for the two fiscal years to reach between $15 million to $20 million.

Lolo then gave a very brief breakdown, saying that the Treasurer’s report forecast about $7.5 million surplus for FY 2019 and about $10 million-plus for FY 2020. Combining the two fiscal years, he said the surplus total could reach more than $17.5 million.

According to the governor, he has instructed the Attorney General, Tonumaipe’a and the staff of the Governor’s Office to draft legislation appropriating this surplus from FYs 2019 and 2020 to complete the new Fono building project.

(As previously reported by Samoa News, the Fono leaders had stated that additional funding is needed for offices of lawmakers as current funding for the project is only for the construction of the structure itself.)

The governor said the balance of the surplus will be allocated to the bond account for repayment, and this move will help the new governor in the future.

He said that such a huge forecasted surplus is good news that it will make the community happy and the goal is to ensure that the government is in good financial condition when its handed over to the new incoming governor.

Lolo went on to recall that his administration was able to achieve many goals with the surplus funds from FY 2017 and FY 2018. For example, that surplus provided funds for the construction of the new Territorial Administration on Aging (TAOA) center in Tafuna, the new security fence for the Territorial Correctional Facility and other road projects.

“There is no question on what can be done with surplus funds,” he said, and reiterated that he wants to ensure the government is on solid financial grounds when the new administration takes over the government in January next year.

He expressed appreciation to cabinet members for this hard work, which made it possible for the administration to achieve many goals in the last 8 years.

At the start of the cabinet meeting Lolo said that it is important to maintain communication with cabinet members currently off island seeking medical attention, etc., such as Marine and Wildlife Resources director Va’amua Henry Sesepasara and Human and Social Service director Muavaefa’atasi John Suisala.

A VTC link was then connected to Va’amua who spoke for about six-minutes to the cabinet meeting from Hawaii.

Towards the end of the cabinet meeting, the governor spoke briefly about the second medical charter on Monday and revealed one more possible medical charter during the last weeks of his administration. He asked cabinet members to prepare in advance for the possibility of another charter.