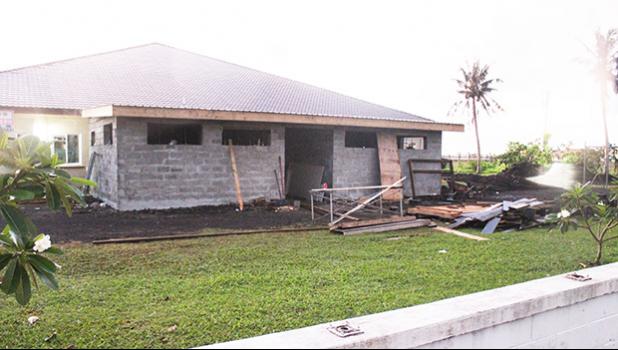 Pago Pago, AMERICAN SAMOA — To combat the coronavirus pandemic locally, Gov. Lolo Matalasi Moliga has suggested for police to check vehicles carrying more than two passengers; for the Health Department to put up road signs encouraging people to “stay-home”, and to encourage non-local residents not to travel to American Samoa at this point.

Lolo urged the Public Works Department to complete renovation of the Veterans Memorial Center the Tafuna Industrial Park that will hold more travelers for 14-day quarantines.

These are some of the COVID-19 issues covered by the governor at Monday’s cabinet meeting where he participated via teleconference, as he remains quarantined at his Maugaoali’i government house. He is expected to be released today from quarantine.

Lolo said that among the important goals outlined in the COVID-19 emergency declaration issued Mar. 18th, is to prevent the spread of the virus on island, and it’s important everyone play their role including the community.

He suggested to the Police Commission for police to conduct road blocks to check vehicles, for example — if it’s carrying four people, to ask for the reason for being on the road, if there’s any urgency for having all four-people in the car.

He recommended that DoH start erecting signs/ billboards encouraging the public to “stay home” which will then make it easy for the government to control any virus spread. “Stay home,” unless there’s an urgency to go out, he stressed.

Lolo advised cabinet members and the community at large to encourage relatives and friends who reside off island wanting to travel here at this time, not to do so and that they will be subject to strict DoH screening at the airport upon arrival.

Lolo said he has family members in Seattle who wanted to travel here but he told them “no”.  He said family and friends travel to the territory mostly for weddings, sa’ofa’i — bestowment of chiefly titles — and other Samoan traditional ceremonies.

And these large gatherings are banned under a provision of the declaration and he asked Secretary of Samoan Affairs, Mauga T. Asuega to speak with village leaders to discourage them from holding such ceremonies at this time.

He said the declaration allows only family gatherings of less than 10 people and even that number of people can spread the virus.

Under a provision of the declaration, only American Samoa residents — US citizens and nationals as well as legal immigration residents — are required to have a locally issued ID to enter the territory.

All other travelers, who do not possess a local ID, are required to go through the Attorney General’s Office to obtain OK Board authorization to enter the territory. Such requests are thoroughly reviewed by the AG’s Office “to see if the travel here is necessary and for what reasons,” acting AG Mitzie Jessop-Ta’ase said in response to questions raised at the cabinet meeting by a director.

She also said that the governor also recommended for the AG’s Office to “scrutinize all work related into the territory” requests for OK Board. Additionally, if the OK board is granted, that traveler “is still subject to DoH screening upon arrival” and now Hawaii is conducting similar screenings that would make it easier for American Samoa.

And with the independent country of Samoa closing its boarders — both air and ocean service — Samoa citizens who traveled here on 30-day permits and are now stuck here, and Jessop-Ta’ase said the Immigration Office is working to contact these individuals.

American Samoa has also closed its borders to flights to and from Samoa and Tonga, under DoH travel advisory effective Mar. 23rd.

Public Works director, Faleosina Voigt promised the governor that renovations and upgrades to the VA Center at the Industrial Park will be ready by today, in time for tonight’s Hawaiian Airlines flight, with more arriving passengers expected to be quarantined.

Lolo informed DoH and other agency leaders to make sure the VA center has refrigerators, with a supply of bottled water and other amenities before the arrival of tonight’s flight.

The governor also urged DPW to look at making sure that the construction of the second quarantine facility behind the Tafuna Community Health Center is completed in an expeditiously manner.

Health director Motusa Tuileama Nua said the VA center, which can house 50-Army cots, is urgently needed especially with tonight’s Hawaiian flight, which has an average passenger load of about 220.

As of Monday this week, 8 travelers are quarantined at the Leone Health Clinic leaving only two units available.

For local residents who were stranded in Apia when Samoa closed its borders and were uplifted on Samoa Airways flights to Pago Pago early this week, Motusa noted that these passengers are quarantined at the CCCAS compound and others went to the Department of Youth and Women’s Affairs building in Pago Pago.

He made a request for the government is to help with food, to feed those housed at DYWA. He said once the VA center is ready, those left at the DYWA will be moved to the VA Center. He said DoH physicians wouldl check and evaluate these travelers and make a decision on who will remain quarantined at DYWA and who will get home-quarantined.

Samoa News learned yesterday morning that other passengers from the two special flights from Samoa are also quarantined at the American Samoa Community College (ASCC) gymnasium — although there was no mention of using ASCC during the cabinet meeting.

A Samoa News reporter traveled there to get confirmation after receiving word, but wasn’t able to get close to the gymnasium, because it’s being guarded by police officers.

LBJ Medical Center chief executive officer, Faumuina John Faumuina informed cabinet members that all hospital clinics are still open but restrictions are in place on the number of people showing up at LBJ.

He encourages people to use their phones to contact the clinics for their needs before coming in. However, if a person is required to come to see a physician for blood tests, to please show up at the appointed time.

Other measures implemented by LBJ to comply with the COVID-19 declaration is limitation of visitors to wards, care givers staying over night, and prohibiting children — unless the child is a patient — from visiting the hospital.