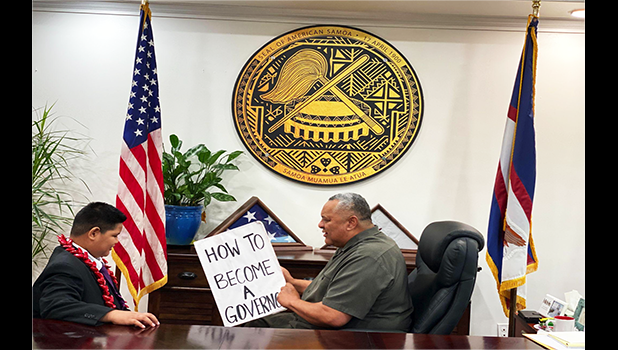 MJ is the son of Tilofia Apelu-Moetala & Korama Moetala Jr. of Fagaitua. He was born with low vision in both eyes caused by a damaged optic nerve; however, MJ does not allow his medical condition to define or limit him. MJ is currently a sixth-grader attending Tafuna Elementary and enjoys singing, dancing, rapping, playing, and braille.

“MJ has had aspirations of becoming the future governor of American Samoa despite his disabilities,” stated Tilofia Apelu-Moetala.  She continued, “To celebrate his 11th birthday, he wanted nothing more but to meet with our Governor.  My husband and I would like to thank the Governor and his staff for allowing us this opportunity.”

Governor Lemanu shared with MJ his journey of becoming Governor.  He encouraged MJ to do well in school and to have the heart to serve.  “This office is not the Governor’s Office; this is not Lemanu’s Office. Instead, this is the People’s Office.  My staff and I are merely stewards of the office, and our service is to the people,” Governor Lemanu stated.  He continued, “...being here today is a testament of your heart to serve. You are one step closer to becoming a future Governor of American Samoa.”

The Governor took the time to discuss how important youth is for the future of American Samoa. He stated,  “The role of our youth in building our community is crucial. Each generation has unique problems that require a combination of veteran leaders and eager youth who want to participate in government.  This generational youth are a new breed of extremely ambitious problem-solvers.”

Governor Lemanu urges our leaders to guarantee young people a seat at the table as we build a decision-making community based on inclusiveness and diversity.