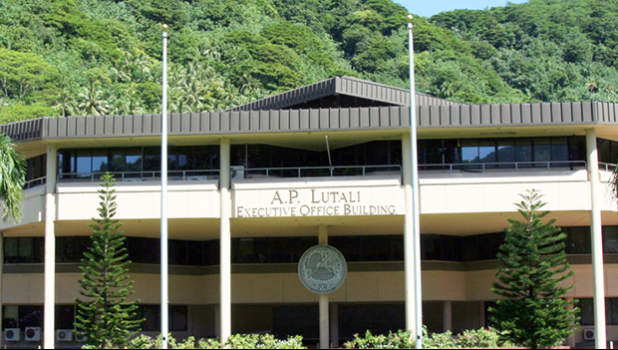 Lolo made the verbal request at last Friday’s cabinet meeting, where he pointed out that some minor changes are being made in the government for “improvement” going forward as the current administration prepares to exit when the new administration takes office in January 2021.

One of the changes, he said is that Tuimavave Tauapa'i Laupola, director of the Office of Public Information — KVZK-TV — is now working at the Governor’s Office and is tasked with preparing “our strategy” for transition from the current to the new administration.

Lolo announced that Mrs. Tinei Misioka Olo, who has been serving at KVZK-TV for many years will oversee this ASG agency.

On Wednesday this week, the governor appointed Mrs. Olo as acting director of the agency, saying that Mrs. Olo “has served the government for a very long time so she possesses a lot of experience to oversee the operation.”

Asked if the governor plans to submit Mrs. Olo’s nomination for Fono confirmation, the governor’s executive assistant told Samoa News yesterday that, “Nothing is off the table. The Governor, depending on the progress of the agency under her leadership, will make that decision down the line.”

“She has worked for the agency for a very long time thus she has the experience to provide leadership in KVZK,” Iulogologo points out.

At the cabinet meeting, the governor said that all other changes implement or planned are improvements for the government going forward. For example, he told cabinet directors to review all of their personnel making sure that each worker is secure in their job before the administration leaves office.

He also said for directors to collaborate with the Human Resources director in reviewing records of contract workers and changing them to career service.

According to the governor, the new administration will have their own operational strategy but “it’s our responsibility to reaffirm the jobs for the workforce.”

He then told directors that there would be no new hires during the last quarter — which is July 1 to Sept. 31, 2020 — for the current fiscal year.

However, between now up to the end of the third-quarter of FY 2020 (which is June 30th) — bring onboard new workers who will be an asset to government operations.

Lolo reiterated what he has told cabinet members since late last year, to start training the next level of their management personnel, to take over their respective departments so that the government continues its smooth transition to the next administration.

He said many agencies have done this already and reminded them to continue this important training.

Early this year, the governor reiterated to cabinet members the importance of the Administration’s “exit report” to be presented to the new administration, to ensure they “have a full and complete understanding of where the government stands, its challenges and finances.”

Around the same time, he told the Fono that the “most significant objective for the final year of the Lolo-Lemanu Administration is to turn over to the new set of leaders a government that is fiscally stable, operationally efficient, economically progressive, and socially supportive.”