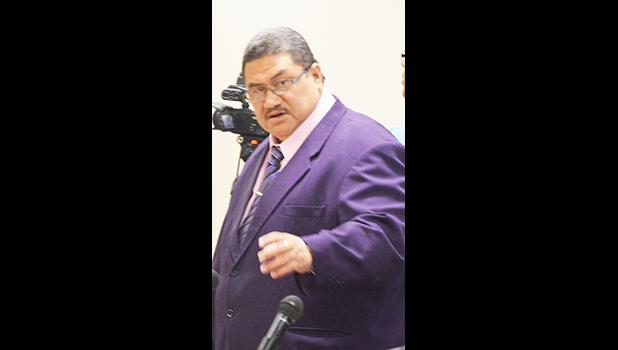 Pago Pago, AMERICAN SAMOA — Vice Speaker of the House, Fetu Fetui Jr echoed calls in the Senate president’s speech during the Fono Joint Session this past Monday regarding the burgeoning drug problem in the territory and immediately demanded a report from the Department of Public Safety (DPS) on the outcome of police investigations into drug cases, which have been reported in the local media.

Speaking during the House Session this past Tuesday, Fetu stated that Fono leaders, along with members of the community are eager to know what happened to police investigations into some of the cases where drugs were allegedly smuggled into the territory.

He mentioned the 2018 case where drugs were discovered in the LBJ Hospital mail; the many drugs cases from the local U.S Post Office in Fagatogo, and some of the drugs cases discovered at the Pago Pago International Airport in Tafuna.

Fetu never mentioned the case where Custom agents held a vehicle imported into American Samoa in May of 2017 after drugs were allegedly discovered inside.

“I echo Sen. Tuaolo Manaia Fruean’s statement this week that drugs have taken over the territory and the question is, what has happened to those cases?” Fetu asked.

“Why has it take so long for the Attorney General’s office to prosecutor everyone involved in those cases.”

“If the Speaker of the House is giving this chamber the green light to establish a house special committee to look into this matter, I guarantee you all that I would bring to justice everyone involved in this drug problem.”

Fetu said the drug problem is real and he sees it getting worse everyday “and if we don’t act now our children will suffer tomorrow,” he said.

“So please, let’s work together to find ways to cure this problem,” Fetu said, adding, “why it is taking so many years to do something to solve the drug problem in the territory?”

He noted, “I don’t understand why it takes ten years to solve it [the drug problem].” Fetu added that the only way to tackle the increase of drugs in the territory is to destroy the roots of the problem.

The Manu’a #1 Representative says drugs have affected our children, churches and even the government. But the territory doesn’t have any plans to respond to the problem.

“Our families are being ravaged by drug use and abuse. Specifically drugs are destroying the futures of many of our young people. We must take immediate action to battle this epidemic and while we may have government and private programs operating, we need to combine resources and tackle the problem in its entirety,” Fetu said.

“In order for us to stop the drug problem in the territory we have got to find the main person who is behind the whole operation instead of chasing the users. That will not solve the problem,” Fetu said.

Saole Representative Titiali’i Kitara Vaiau also voiced his concern over the increase in drug cases in the territory. Titiali’i said that almost everyday he reads in the Samoa News about people being arrested and charged for unlawful possession of methamphetamine (meth) or marijuana.

He further stated that almost everyone arrested for violating local drug laws told police that the drugs were bought from either Le Aute or Le Filifili.

“We need to close these two places down because this is the root of the problem. The drug problem in the territory is real and it is getting worse everyday,” Titiali’i said.

At the end, he apologized to the house chamber because one of the places DPS officers raided early last week was a home in his constituency where three people were arrested and charged after police discovered drugs inside the house.

Rep. Lavea F. Mauga agreeing with statements from his fellow faipule said, “Coronavirus is an invisible virus we can cure, but drugs are a visible virus … we’re still trying to find ways to cure it,” adding that “maybe the Fono needs to pass legislation to try to cure the drug virus.”

He said that one of the big problems our government is facing right now is people who don’t want to reveal to law enforcement what is going on around us. He stated that the drug problem started up with marijuana, but right now, we’re moving up to meth and many other types of illegal drugs.

“Where are these people getting these illegal drugs?” asked Lavea, who then said that all law enforcement agencies need more resources in order for them to deal with this drug problem.

Other faipule supported the call for a House hearing with American Samoa Government (ASG) officials to discuss a solution to the ongoing drug problem in the territory.

The chair of the House Public Safety Committee and former deputy commissioner, Rep. Avagafono Tuavao Vaimaga Maiava said the drug problem in the territory is an ongoing problem.

He said the current criminal process procedure is — once a person has been convicted of violating local drug law, that person is sentenced to jail. There are no drug rehabilitation programs available on island to help those with a drug habit. He said that there must be a program set up by the ASG for rehabilitation and treatments efforts.

“I believe our drug addicted community has gone way beyond local counseling. We need to seriously consider a detoxification program on island to prepare the drug users for formal treatment. As a person progresses from the medical detoxification program they then enter into a drug rehabilitation program, which would support their transitioning,” he said.

During the Fono Joint Session on Monday this week, Tuaolo said drugs have taken over the territory. He said the name of American Samoa and its government are respected and well guarded, “but look at what has happened. The name of the government may have been wrongly used in connection with drugs.

The Senate leader stated that the Fono awaits the outcome of investigations of drug cases, which had been reported. He mentioned a drug case at the hospital and also the Territorial Registrar’s Office. “What has happened to those cases?” he asked.

Tuaolo said while the territory has received significant financial blessings, if drugs are a result of those blessings, then he would be very sad.

It was May of 2018 the CEO of the LBJ Hospital in American Samoa confirmed to Samoa News the discovery of drugs in the hospital mail. Seven packages were addressed to various divisions of the hospital including the Nursing division, the Tafuna Health Center and the Department of Health.

Hospital CEO, Faumuina John Faumuina, said one package was delivered by the Procurement Department to the Nursing Department, who returned it saying, "They were not aware of such an order."

Faumuina said that was when Procurement contacted his office over their suspicions about the package. The CEO immediately contacted police and the other packages were found.

In 2020, House Public Safety Committee conducted a hearing to discuss this issue. Among those who appeared before the committee to testify was Deputy Commission Falana’ipupu Taase Sagapolutele.

When questioned regarding the seven packages containing crystalline substance, Falana’ipupu explained that the Federal Bureau Investigation (FBI) is handling the case right now.

Falana’ipupu explained that an investigation was carried out by the DPS Vice & Narcotics Unit (VNU) immediately after the case was discovered at the hospital. A few months into the investigation, investigators for the VNU discovered new information regarding the case and decided that they needed further resources to complete the investigation.

A discussion was initiated between DPS and the Attorney General’s office, which later advised DPS to seek assistance from the FBI.

According to Falana’ipupu, FBI agents flew down to American Samoa on Sept. 27, 2018 and all the information regarding the case, including the report from the initial investigation and evidence were handed over to the FBI agents and they carried everything with them off island.

In 2019, DPS executed search warrants from the FBI at two locations in the territory. The investigation is still on going.

DRUGS ALLEGEDLY FOUND IN A VEHICLE AT CUSTOMS

In May of 2017, Customs Division held a vehicle imported under the House Speaker’s name after agents allegedly discovered drugs inside.

When question at the time by Samoa News, House Speaker Savali Talavou Ale confirmed that a vehicle, which the Customs Division had not released a month after it arrived in the territory belongs to his son-in-law.

Contrary to earlier reports, which said the vehicle was not consigned to the speaker, Savali told Samoa News the vehicle was imported under his name but it belongs to his son-in-law from Asili.

Responding to Samoa News’ questions, the Speaker said he is waiting for the authorities to complete their investigations to see what they find.

Savali expressed disappointment that it’s taken this long for government employees to make a decision on what they claim to have found in the vehicle.

He believed the car should be released.

There was no official information from the Acting Chief of Customs and Commissioner of Public Safety at the time on what was found in the vehicle, a black Jeep Cherokee.

Sources said that a vapor chemical, which yielded positive results in a test of the active ingredient in marijuana THC, was found in the vehicle, along with ammunition.

The Speaker didn’t say what Customs discovered but commented that his son-in-law said what was found is not illegal.

Commissioner of Public Safety at the time, Lei Sonny Thompson told Samoa News that the investigation into this matter was not completed, therefore he could not release any information about it.

Since 2017, no one has been charged according to this case and no information has been released.