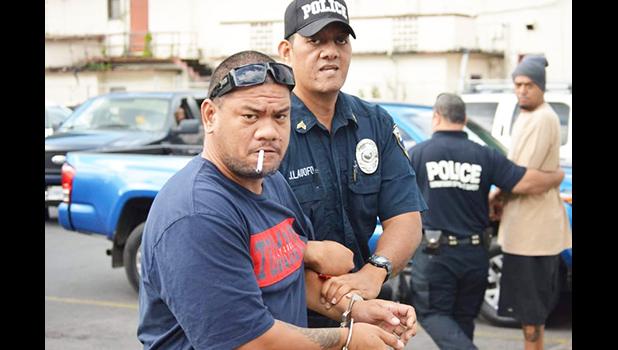 Pago Pago, AMERICAN SAMOA — A 30-year-old inmate who was accused of escaping from confinement last year while serving a 25-year sentence for escaping from the Territorial Correctional Facility (TCF) in January 2010 and assaulting an ANZ bank security guard, is now back in Court on assault charges.

This time, he’s been accused of assaulting two Correctional Officers inside the TCF compound last week.

He is charged with two counts of 3rd degree assault, both class A misdemeanors, punishably by imprisonment of up to one year, a $1,000, or both.

Lepou’s next court appearance is next month.

The government alleges that it was around 11:44 a.m on Oct. 21, 2020, a police captain who was the Day Watch Commander at the Tafuna Correctional Facility (TCF) called the Tafuna Police Substation (TPS) reporting an assault, involving inmate, Pati Lepou, the defendant in this case.

The police captain stated that according to reports he received, the inmate allegedly assaulted two Correctional Officers (CO) with both COs receiving minor injuries as a result of the alleged incident.

Several police officers responded to the call, met up with the police captain at the TCF main office and spoke to the two victims, the COs.

The first victim told investigators that he and another CO (second victim) were posted at the Alpha Building main gate where the defendant approached them and asked if he could go out to the main gate. The first victim stopped the defendant reminding him that he is on ‘D Action’ (Disciplinary Action) for misconduct.

At that time, the defendant allegedly threatened both victims that he would stab them with his knife if he got another chance to come out of his cellblock.

Investigators interviewed the second victim regarding the incident where he stated that after lunch was served, he spotted the defendant outside of the Alpha max building again. That was after the defendant had assaulted the first victim.

A few moments later, the defendant walked towards them (both victims) and confronted the first victim on why he had told the Watch Commander of what he did, getting him put on Disciplinary Action. That is when the defendant threatened both victims by telling them that he would get his knife and stab both of them.

EMS personnel arrived at the scene and both victims were examined and treated for the minor injuries they sustained due to the alleged incident.

The defendant was escorted to the visiting area at the TCF where he was Mirandized and said he wished to make a statement about what happened.

He begged a second time for a chance to go to the front office however, the first victim continued to deny him and instructed him in a loud voice to go back to his cellblock. The defendant stated that he got mad and at the same time embarrassed in the way the first victim treated him. He then punched the first victim in his left eye.

Defendant denied threatening both victims with stabbing. He told investigators that he doesn’t have a knife in his possession nor does he have anything inside his cellblock. He said he’s tried his best to serve his detention so that he can get a chance to go back home, however, the behavior by both victims caused him to commit the crime.

Investigators interviewed other witnesses who corroborated the two victim’s statements. One witness told investigators that he saw the defendant talking with the two COs at the main gate. Immediately after the discussion, he saw the defendant throw punches at both COs. The next thing he noticed was that defendant was hand cuffed by the two COs and escorted him back inside his cellblock.