Large piece of wreckage found on our shores at Maloata 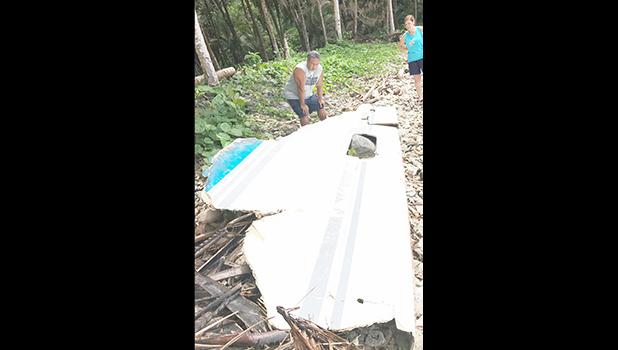 A local resident has wondered, and the reason Samoa News was contacted, if a large piece of what appears to be from a fishing boat  found on a Tutuila shoreline village over the weekend is linked to the discovery in Samoa of a “massive piece of wreckage.”

And Samoa Police Commissioner Fuiavailiili E. Keil told an opening event of the Pacific Transnational Crime Network workshop and unit early this week in Fagatogo about the discovery on the shore of a village in Samoa “part of a vessel” that is suspected to be involved in transnational crime.

A member of the Gurr family told Samoa News that a large piece of what appears to be from the side of a fishing vessel was discovered on the beachfront of their home in Maloata on Sunday afternoon.

Local authorities were contacted late Monday afternoon for someone to conduct an inspection of the ‘piece of wreckage’. Contacting local authorities happened after a family member read an online story from the Apia-based Samoa Observer newspaper regarding a “massive piece of wreckage” discovered Sunday afternoon (Samoa time) by Phillip Marsden and some friends inside the lagoon of Vava’u Beach, located on the south of Upolu Island.

“It’s just very interesting to read the Samoa Observer story, after my family discovered this large piece [of some type of wood or so] that appears to be from the side of a fishing boat,” a Gurr family member told Samoa News yesterday. “Maloata is on the north shore of Tutuila on the Western side, while Vavau is on the south shore of Upolu.”

“I wonder if there are any other similar piece that have washed ashore on other north shore villages of Tutuila,” the family member said via phone.

Whether or not the piece of wreckage found on Tutuila will help provide clues to the mystery in Samoa, it is unclear, but the Gurr family is hopeful that it will be of some help.

Of interest is that Fuiavailiili mentioned a wreckage discovered on Upolu during his remarks at Monday’s opening of the weeklong Pacific Transnational Crime Network (PTCN) training workshop hosted by American Samoa.

“For too long the two Samoa law enforcements haven’t come together as a unit to fight transnational crimes,” said Fuiavailiili, who noted that he forgot to bring the newspaper which has a story about “part of a vessel [that] ended up in our shores, discovered over the weekend.” He then noted the need for law enforcement to look at “border control”.

Fuiavailiili didn’t identify the Samoa newspaper by name, nor the village on Upolu where the piece of a vessel was discovered.

And later in the day during his remarks at the opening of the Transnational Crime Network center in Fagatogo, Fuiavailiili spoke about the “critical importance” of sharing information between the two Samoas.

“As a matter of fact,” there was an article in the newspaper about part of “a craft that ended up on the shores... of the back villages [and] we’re suspecting it has something to do with transnational crime — narcotics and so forth,” he said.

“So we’re looking forward to closing the gap, having more communication with our brothers in American Samoa,” he said. “We’re excited about it.”

[See yesterday’s Samoa News edition about the workshop and opening of TCN.]