Le'i: DPS and feds have a close relationship — bashes newspaper 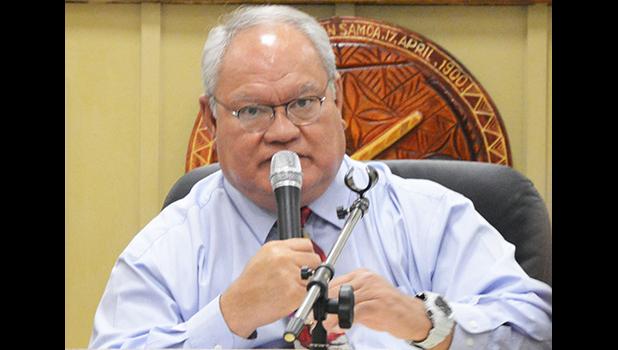 Pago Pago, AMERICAN SAMOA — Police Commissioner Le'i Sonny Thompson has accused Samoa News of not reporting anything positive about DPS’s daily service to the community, including issues that were discussed during a hearing before the House Budget and Appropriations Committee on Wednesday, where a lot of faipule praised him for the work being carried out by police officers — but they only report “bad news to sell their newspaper.”

This was Le’i's response when he was questioned by committee chairman Rep. Manumaua Wayne Wilson during a hearing yesterday, on allegations that inmates are allegedly being assaulted by prison guards.

Various issues were discussed during the nearly 2-hour hearing.

It was Manumaua who asked Le’i to elaborate on the allegations of inmate mistreatment at the TCF.

The faipule wanted to know if the news reports about the claims are true or not.

Le'i started his lengthy response by saying that every morning, before he heads to work, the first thing he does is read the newspaper to see if there is anything in there about DPS that he isn't aware of, so he can raise it during his daily briefings with DPS senior staff members.

He personally thanked House Speaker Savali Talavou Ale for statements that were published in the newspaper yesterday morning, in response to Rep. Toeaina Faufano Autele's comment that he will do whatever he can to ensure the issue reaches the federal court.

Savali told faipule on Tuesday, to consider the fact that inmates at the TCF are convicts and under the supervision of DPS, and they should be thankful for the treatment they're receiving in prison, because "half a loaf is better than nothing."

Savali said it is the responsibility of faipule to find ways to assist Le'i and those in power, especially those looking after the inmates, instead of trying to protect the inmates and pointing fingers at the prison guards. (See yesterday's Samoa News edition for full story).

Le'i referred to the newspaper article and said the comments Toeaina made — about referring the case to the feds — were too harsh and there was nothing positive from the hearing reported in the story, only negative things "to sell the paper."

Toeaina is Lei's brother-in-law, according to what Le’i told the faipule.

Le'i said the relationship between DPS and the feds is a close one, not like before. As proof of this, he told lawmakers that not long ago, 22 federal agents traveled to the territory to work with the DPS on ways to heighten the services of the local police force.

According to Le’i, he has already ordered an enquiry into the matter, and there was an investigation conducted when the inmates escaped from the TCF.

(The inmate who claims to have been beaten by TCF guards is one of the four who escaped from prison earlier this year).

He said he ordered the enquiry right after Samoa News published the article about an inmate telling the judge he was assaulted in prison.

“Every morning during a briefing with my senior staff, I always remind them to abide by the law and be an example to the public. As we all understand, there are rules that guide police officers while on duty, and there are also laws that apply when prisoners escape from confinement. The safety of the community is our priority and I want to make sure police officers are doing their job according to the law," Le’i said.

Samoa News should point out that ever since reports of alleged mistreatment of prisoners at the TCF surfaced, emails and telephone calls to Le'i for comments have been unanswered.

This is after Le'i assured Samoa News that he would never hide any information or ignore any questions the community wants answered regarding his department, and that he'd be available any time to provide an explanation.

It seems this isn't the case.

(Samoa News would also like to point out that the former TCF warden, the late Amituana’i Mika Kelemete, who served time in federal jail for beating an inmate on TCF grounds, pled guilty to conspiring to violate the civil rights of an inmate. It would seem despite certain of our leaders believing inmates are convicted criminals and a danger to our community, they do have civil rights.)