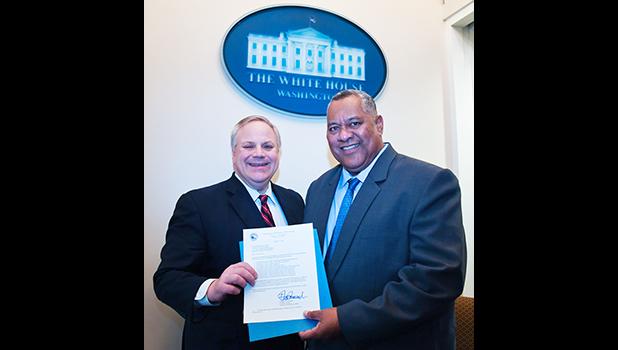 “Although we have achieved certain milestones in our working relationships with various federal agencies, there are still numerous outstanding federal barriers that we must address to effectively help our territory build a sustainable economy,” Lemanu continued.

He said America Samoa needs assistance, and extended an invitation to the federal partners to visit the territory, to get a “better understanding of our economic challenges” and “experience and observe for yourselves the challenging geopolitical landscapes in which we live and work.”

The IGIA is co-chaired by the DOI and the White House, and those in attendance include governors of insular islands and their congressional representatives. At the outset of his remarks, Lemanu noted that he was representing Gov. Lolo Matalasi Moliga who could not be in attendance “due to other engagements on island”, but “sends his very best wishes to you all.”

While a comprehensive written statement was submitted for the record, Lemanu gave an overview of what the Lolo Administration describes as “key economic challenges we face in American Samoa”. He told the audience that American Samoa’s economy is dependent on two pillars: ASG and the canning industry. However, the cannery’s competitive advantage — of duty free entry into the US market — has declined steadily over the years.

Lemanu reminded the federal government that the remaining tuna cannery, StarKist Samoa, “is the lifeline of our tuna industry and our territory needs this industry to survive in order to support what little economic base we have.”

Lemanu then outlined what American Samoa is seeking from the federal government:
•    permanent federal 30(A) tax credit incentive scheme;
•    re-implementation of the US Department of Labor’s process in determining American Samoa’s minimum wage rates through the use of Special Industry Committees;
•    revocation of the Ocean Monuments and Sanctuaries expansion and federal policy restricting access to fish on the high seas by US-flagged boats supplying Star Kist Samoa; and
•    demanding better results for American Samoa from the US-South Pacific Tuna Treaty negotiations, which progressively favored Pacific parties to the Treaty over the years at the expense of the American Samoa tuna industry.

Lemanu referred to the recently increased Medicaid funding for US territories and said such federal resources open extensive opportunities through the procurement of additional Medicaid providers to serve the “growing medical needs of our people”. American Samoa is getting $84 million for 2020 and 2021 and requires matching funds.

“We seek guidance and assistance from our federal partners on how to optimize this opportunity by providing alternatives for local match to provide much needed health care and build capacity of our health care workforce, hence help grow the economy,” he said.

Lemanu emphasized that the federal cabotage law has continued to prohibit foreign air carriers in ways never intended or foreseen by the original drafters of the federal Merchant Marine Act of 1920. He claimed that efforts to explore and attract foreign investments have stalled due to just two flights to and from the US to American Samoa — referring to Hawaiian Airlines flights between Honolulu and Pago Pago.

He said he’s seeking “legislative support and approval”, allowing the US Transportation Department to issue a long-term cabotage waiver to American Samoa that “would open up air transportation competition and help regulate domestic airfares at more competitive levels, effectively removing the largest stumbling block in the development of American Samoa’s tourism sector and foreign investors.”

Lemanu told the meeting about the public-private collaboration between ASG and locally-based Inter Island Airways to “establish a reliable and essential” air service between Tutuila and the Manu’a Islands. According to him, the parties “are working diligently” to meet US Federal Aviation Administration requirements and timelines.

Furthermore, ASG is seeking assistance from USDOT, and support from the Interior Department and the White House “in our efforts to be self-reliant in the inter-island market and grow the Hospitality/Tourism industry pillar of our economy.”

To “diversify our economic base by a developing 21st century digital economy,” Lemanu shared that ASG — through the Employees’ Retirement Fund — “invested significantly” in the Hawaiki Submarine Cable, which was launched last July, connecting American Samoa to Hawaii and the US mainland. “We seek our federal partners’ assistance to enable us to forge public private collaborations and develop and grow business processing outsource (BPO) companies in American Samoa,” he said.

While access to air transportation plays a vital role in deploying immediate assistance to American Samoa following natural disasters and other public emergencies, Lemanu said it can also “bring risks to our fragile and vulnerable environment.”

“This risk requires our government to take seriously the impact of regional and international global health epidemics which can become very real public health threats to our small island population,” said Lemanu who is also the

Governor’s Authorized Representative (GAR) to the federal government during disasters.

He pointed to the recent measles outbreak in Samoa and how it “tested our ability to protect our territory and our people.” He explained that American Samoa is successful in executing the territorial emergency plans to protect against the measles outbreak and also now, the same protocols are in place for protection against the coronavirus.

“We are extremely sensitive to such threats that can decimate our population and destroy our already vulnerable economies,” Lemanu said, noting that low level threats of transmission in the US states “is obviously not the same for our island territories.” He thanked the Center for Disease Control and Prevention and US Health and Human Services for their support in this area.

He reminded the audience that natural disasters have occurred more than ever and American Samoa acknowledges the importance of pre-disaster preparedness and post-disaster recovery, “especially in our economic infrastructure.”

“Thus, I call upon our federal partners with economic infrastructural jurisdiction to assist us. Federal assistance for expanded mitigation is key, and we welcome your expertise and knowledge to work with us,” he concluded.

The presentation was made during the federal Inter Agency on Insular Areas meeting in the nation’s capital. According to a DOI national news release, Bernhardt presented Lemanu with $9.7 million in CIP grants:
• $4 million for construction of elementary school buildings and gymnasiums across the islands of Tutuila and Manua;
• $1.3 to American Samoa Telecommunications Authority for maintenance and renovations;
• $1.3 to American Samoa Shipyard Services Authority for the continuation of the slipway replacement project;
• $1.3 million to Department of Port Authority for the extension of the Malaloa dock;
• $1 million to the American Samoa Power Authority for heavy equipment; and
• $800,000 for the completion of the Tafuna Youth Center.