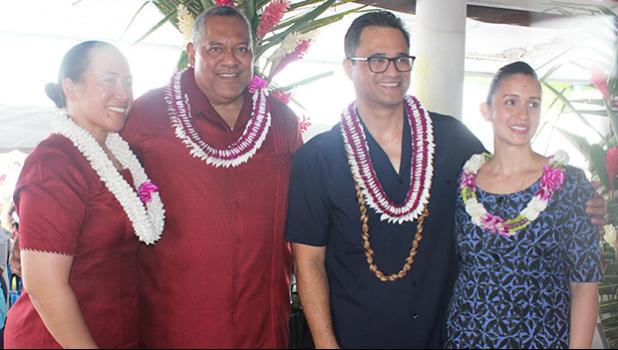 Pago Pago, AMERICAN SAMOA — The “Lemanu & Talauega” gubernatorial team for the 2020 general election has defined its campaign on the principles of integrity, leadership, and commitment, according to former Attorney General, Talauega Eleasalo Va’alele Ale, in his speech during the team’s campaign rally last Saturday in Matu’u.

Friends, family members, and supporters turned up for the rally to officially announce the Lemanu and Talauega team, which according to the rally program are “Auauna Fa’atuatuaina” — “trusted servants”.

In his speech, delivered in Samoan, Lemanu said voters will choose on Nov. 3rd leaders who will represent not only the local government but also American Samoa in the Pacific and at the international level.

He said voters will select leaders who are trusted and can be trusted at the helm of leadership to build American Samoa’s path forward — a gubernatorial team trusted with forming and building the government to achieve a great future for American Samoa, a team that is honest and will voice the wishes of the people.

Lemanu urged voters to select the gubernatorial leaders who are trustworthy, honest, and have integrity. He said the future is not going to be easy, and residents have witnessed the many changes and challenges in today’s life, changes that have affected plans by the sons and daughters of American Samoa who want to return home.

He said the priority goal “is our children and their future”.

According to him, changes need to be made by the government and village councils and even churches… to benefit the territory’s future — “our children.” He urged the audience to hold on to “our children” as they are the treasures and the ones who will continue the work of “our forefathers” and the work of those in office now.

Lemanu recalled a statement, in Samoan, made years ago by the late Paramount Chief A.U Fuimaono, who was the first elected congressional member of American Samoa and passed away in 2008.

Fuimaono was asked how a person can serve as a leader and his response was, “O e soli ma’a, ma manava le pefu” — meaning “You trample the rocks, and breathe the dust.” Lemanu said he and Talauega have already taken this road and are prepared to serve as governor and lieutenant governor.

He said the Lemanu and Talauega team has full and complete understanding of government, its needs, and its people, and therefore are prepared for the job.

Lemanu provided a brief background on Talauega, who has been an attorney for many years; resigned from his AG job; and remains a deacon of the CCCAS in Nua and Se’etaga. He introduced Talauega’s wife, Marian, who is an attorney, having served in ASG and currently in private practice.

He also shared a brief background about himself, saying this is his 8th year as Lt. Governor, under the Lolo Administration and his wife, Ella, is an active US Army member for the last two decades.

Finally, he publicly announced that their campaign chairman is Malemo Tausaga, the current deputy Secretary of Samoan Affairs who is not new to political campaigning.

Talauega in his speech delivered in English, announced that in the coming “days and weeks” their team will share with the public their priorities and solutions to address the fundamental challenges facing the territory.
“Challenges such as improving our healthcare, upgrading our infrastructure, diversifying our economy, and improving our educational performances and standards. These challenges are not new, but our solutions, they must be,” he explained.

Additionally, “we need leaders who will listen and strive to understand the real life issues that face each of us every day, that no matter your current place in life, we all strive to be better and we deserve to live our lives to the fullest.” And through hard work and dedication, “every single one of us can move forward and have the opportunity for better lives for ourselves and for our children.”

He said he and Lemanu are committed to working everyday to create that opportunity for every resident of American Samoa. “To make this a reality,” he called on every one in the community “to stand up and be counted.”

“We cannot stand and just complain. We have to be involved,” he said and ask for the public’s support “but especially your votes on Nov. 3rd.”

He issued a verbal special “shout-out” to the youth of American Samoa. “To the young professionals, to the disenfranchised — join us. We can make American Samoa a better place for you, for me, and for all of us,” he promised.

Talauega said the team’s campaign that is on the principles of integrity, leadership and commitment — “these words were carefully chosen because they reflect Lemanu and I’s vision of what we believe are the leaders American Samoa need now more than ever.”

The challenges “we face today and the challenges of tomorrow demand more of our leaders than ever before. We know the road ahead will challenge and test us, but we firmly believe that with the grace of God, your continued support, and the principles of integrity, leadership, and commitment, we can be successful together.”

After the official announcement, Lemanu and Talauega with their wives, family members and supporters lined both sides of the main road in Matu’u for their campaign ‘wave’.