Lemanu's State of the Territory address focuses on COVID response 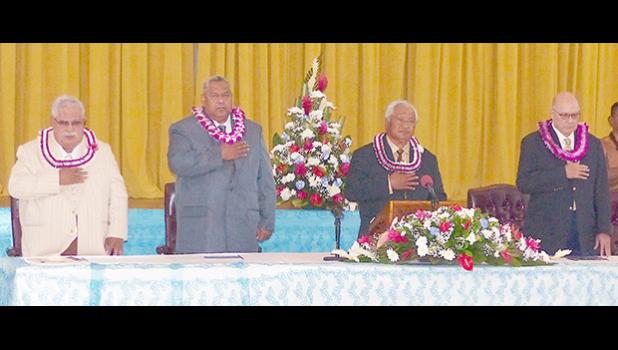 The sitting governor is required under local law and the constitution to deliver in January the State of the Territory Address, which covers issues such as ASG’s financial outlook and measures to be submitted to the Fono.

Lemanu who delivered his address in Samoan while an English official written address was distributed to lawmakers, Lt. Gov. Talauega Eleasalo Va’alele Ale, and others in attendance including his new cabinet. Among the issues addressed by the governor is the repatriation of American Samoa residents stranded in the US.

Lemanu said that the day after he and Lt. Gov. Talauega took office discussions began on repatriation of local residents, who want to return home to be reunited with families. He said these residents have been faced with many difficulties including losing their jobs and even some passing away while still waiting to return home.

He then announced that the first repatriation flight is been planned for Jan. 29th, and that each flight will bring in 160 travelers. He point out that this is not going to be an easy task and its will be costly, but it has to be done.

In his written address, the governor explained that the COVID-19 Task Force has been reconstituted with a continued COVID-19 response, repatriation of residents, and vaccination of the community.

While fortunate to remain among the few COVID-free locations in the world, he said travel restrictions have posed adverse impact on residents stranded abroad “and on our local industries.”

Lemanu said a multi-phase Repatriation Plan is underway for the first series of repatriation flights in close coordination with the ASG Hawaii Office and the support of the Hawaii state government.

He said the task force, headed by Talauega will be providing clear and concise information on the plans being deployed for repatriation in the days to come “as we prepare to bring our people home.”

“I ask that our people be patient as health experts implement the phased plan” to meet US Center for Disease Control and Prevention (CDC) health requirements of quarantine and vaccination.

On ASG finances, Lemanu expressed thanks to the Fono for approving an administration measure that allowed funding to continue under fiscal year 2020 funding while waiting for passage of a FY 2021 budget to be signed into law. And the Administration will be transmitting an FY 2021 budget for review and approval.

In his written address, on the “State of Financial Outlook”, the governor explained that preliminary statement of revenues, expenditures and change in fund balance reflect a collection of revenues totaling at more than $31.47 million as of Dec. 31, 2020 (which is the end of the first quarter of FY 2021).

He said revenue collection enforcement remains a priority for the new administration.

In his oral address and written one, Lemanu mentioned the new Consolidated Appropriations Act 2021, which will provide local residents with $600 for Economic Impact Payments or stimulus checks.

Samoa News will report in future editions other financial issues mentioned in the governor’s written address.

He also pointed out acting directors have been appointed and their names will be sent to the Fono for confirmation.

While House Speaker Savali Talavou Ale presided over the joint session, Senate President Tuaolo Manaia Fruean gave the response to the governor address on behalf of the Fono, saying that the previous Lolo and Lemanu Administration achieved many things including the protection of the territory from the COVID-19.

He requested that the new administration adhere to advice from physicians  on the repatriation plan. “Listen to the doctors,” Tauolo informed Lemanu, saying that “our doctors will help us.”

Tuaolo also said that the previous administration has able to breakground for the new Fono building, which remains incomplete and lawmakers would like to see it come to fruition under the Lemanu and Talauega Administration.

He also asked the new administration to start construction of the new High Court building which broke ground during the previous administration — and if possible for the new Administration, to build a new hospital.