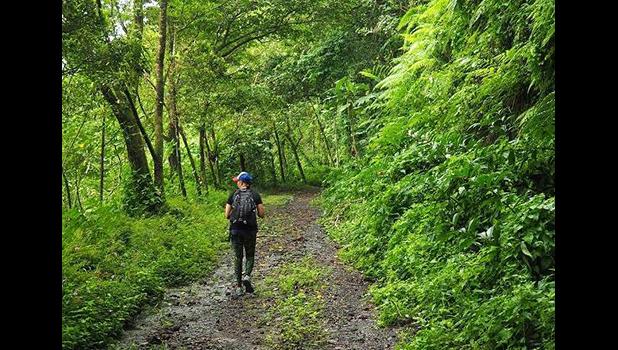 It might come as a surprise that the United States' most remote national park isn't in Hawai'i or even in the frozen wilderness of northern Alaska. This hardest park to reach — for Americans anyway — is almost 8000km from the US mainland, yet it's just a few hours' flight from Auckland.

The park is a boon for visitors because it means large chunks of American Samoa are accessible to the public as of right — not always the case in the Pacific, where land is often locked up in traditional ownership — and the deep pockets of the US government mean the territory has a network of well-maintained trails.

Walks in American Samoa vary from a 200m amble along a beach to an 11km return slog to the top of Mt 'Alava, a peak overlooking Pago Pago Harbour.

They aren't like the multi-day tramps of New Zealand national parks but that's not surprising when you consider even the biggest island is just 33km long and at most 5km wide.

My guides to Tutuila, Michael McDonald and Paula Stevenson-McDonald, only discovered the island's potential as a walking destination by accident.

Both were born in American Samoa and educated on the US mainland. When they came home in 2012 they made it their mission to promote physical activity and combat the territory's obesity rate, which is alarming, even by Pacific standards.

The couple opened a fitness and water sports centre, founded an outrigger canoe club, and organised a series of running events.

"We wanted to add some hikes so we started checking out our backyard, and we realised it's beautiful. Now we're doing our best to show it off," Michael said.

So quite by accident the McDonalds' fitness venture morphed into a tourism business they call Best Tours. With tourism in its infancy in American Samoa they're not exactly swamped with visitors, but most of the customers they do get are keen to stretch their legs in the national park.

The most popular walk on Tutuila is the World War II Heritage Trail, which starts at Blunt's Point, a headland overlooking the entrance to Pago Pago Harbour, and follows a ridgeline above the harbour's urbanised southern shore.

Other the next few days Paula and I sampled half a dozen walks on Tutuila. Highlights included the Vaitogi Lava Fields Walk, where jagged fingers of jet-black lava jut into a crashing sea, and, on my last full day on the island, the Mt 'Alava Trail to a hilltop overlooking Pago Pago Harbour.