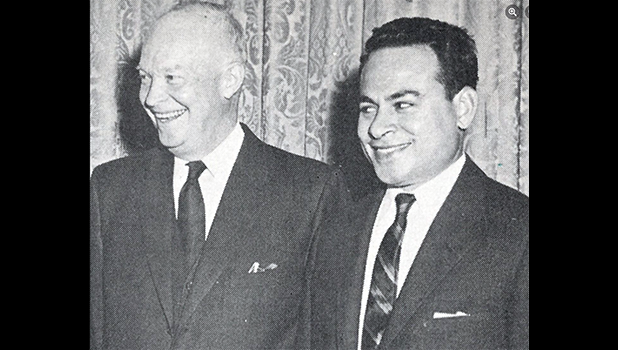 Pago Pago, AMERICAN SAMOA —  Last Saturday night with a turn-away crowd at the DDW Restaurant, members of the Republican Party of American Samoa gathered to celebrate the 65th anniversary of the appointment of Uifa’atali Peter Coleman as the first Samoan governor.

Gov Coleman was the first non-heredity head of government in history anywhere in the Pacific.

Only Tonga’s Prince Tungi (later King Taufa’ahau Tupou IV), who was appointed head of government by Queen Salote in 1949, preceded him as a Pacific government’s chief executive and three years later in 1959 (Western) Samoa’s first cabinet chose Mataʻafa Faumuina Mulinuʻu II as it’s prime minister, giving the three central Polynesia men the distinction of being the earliest indigenous leaders of their governments anywhere in the islands.

The approval of Peter Coleman as governor by President Eisenhower was a bold civil rights step in the 1950s that foreshadowed the revolutionary U.S. civil rights reforms that followed the assassination of President Kennedy.

In a letter read at the gathering, Republican National Committee Chairman Ronna McDaniel said “President Eisenhower's leadership on this civil rights victory helped achieve representation for Samoans and all Pacific Islanders in your government and in the United States, a value that is at the core of the Republican Party today.”

Not to be outdone, RNC cochairman Tommy Hicks weighed in with a video message in which he said, "Coleman-Eisenhower Day is an important day for American Samoa and the United States,” and went on to “thank Governor Coleman for his eleven years of service on the RNC.”

Recognizing the milestone of her grandfather’s selection of Governor Coleman, Mary Jean Eisenhower, a member of the Eisenhower Foundation Board, in a video greeting to the audience said “It's imperative to remember such wonderful milestones as the world's tensions become challenging... How wonderful to celebrate Coleman- Eisenhower Day.”

A surprise interview with Jim Sewell, a member of Governor Coleman’s staff from 1957 to 1961, delighted the crowd as he reminisced about life in the islands so many years ago.

Speaking from his native Oklahoma, where the 90-year-old lives in retirement, an emotional Sewell said "I met Governor Coleman and family, became close to them and fit right in. I have a great appreciation for him; he was a man of depth, quality and professionalism and someone I needed in my life. He gave me the first boost on my future. It was a turning point in my life and I'll always be grateful to Governor Coleman for taking a chance with me." Although Sewell departed American Samoa in 1967, his name is familiar to many because his great grandson, Penei Sewell, is a star player in the National Football League.

Party Chairman Taulapapa Will Sword on behalf of the party honored Senator Alo Dr. Paul Stevenson with its ever first Patron Award in recognition for his service to the party over many years, including serving as Coleman-Eisenhower Day event chairman annually over the past five years. Clearly surprised by the tribute, Senator Alo recalled his days working for Governor Coleman’s 1977 election.

Republican Party Chairman Taulapapa Will Sword on behalf of the party honored Senator Alo Dr. Paul Stevenson with its ever first Patron Award in recognition for his service to the party over many years.[courtesy photo]

Returning to McDaniel’s letter, the party chairman said “I want to recognize the hard work of Samoa's Republican leaders in upholding our values, particularly the three members of your party who sit on the Republican National Committee: Party Chairman Will Sword, National Committeeman Frank Barron and [Committeewoman] Uifa’atali Amata Radewagen, who since 2012 has been the most senior member of the RNC." He expressed hope Uifa’atali would run for reelection to Congress next year.

In her own video to the dinner, Congresswoman Uifa’atali acknowledged McDaniel’s letter, saying she intended to run again and would make a formal announcement next year.

Regretting she could not be there personally, Uifa’atali noted she remains in Washington to be on hand for a crucial debate this week on infrastructure and social program bills that would impact American Samoa.

Uifa’atali noted that in addition to recognizing President Eisenhower’s October 14 (1890) birthday and Governor Coleman’s October 16 (1956) appointment, this year marks the first time Constitution Day is being observed formally, recognizing the territory’s first constitution developed under her father and promulgated on October 17, 1960. She thanked Fono leaders and Governor Lemanu Peleti Palepoi Sialega Mauga for establishing this observance.

Republican Party of American Samoa Vice Chairman Michael McDonald, who organized the dinner, served as master of ceremonies for the program. Recognizing a group of American Samoa Community College political science students who were attending the dinner, he offered them all free party memberships for a year.

On a more somber note, McDonald also asked for the attendees to rise for a moment of silence for prominent party members who have departed this past year, including Su’a Carl Schuster, Salote Starr Schuster, Otomalesau John Ah Sue, Toetagata Albert Mailo and Jim Longnecker.