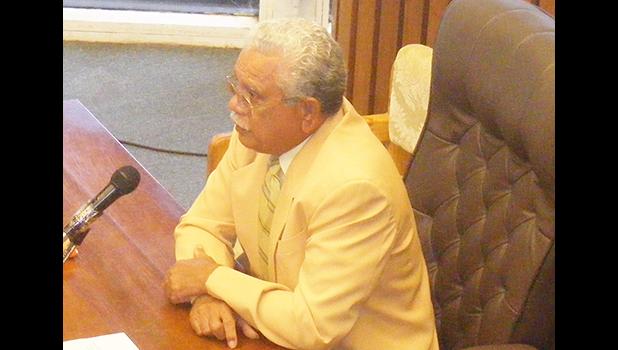 American Samoa has a total ban on any shark possession and it doesn’t match the federal law which allows landing the whole shark, although federal law bans shark finning.

The local shark law issue was put through as a recommendation, and approved by the Council, which requested that ASG’s Department of Marine and Wildlife Resources (DMWR) “move quickly to finalize” the shark law exemption.

Before Council members voted on the recommendation, DMWR Director Va’amua, who is ASG’s member on the Council, explained that draft revision of the local shark law is completed, “it’s in our office now for public comments,” and a public notice will be going out soon seeking public comments.

“So I don’t really see what else the Council can do, except that we are in the process now,” said Va’amua, who declared his “no” vote on the recommendation and emphasized that ASG is already moving to address this matter.

Shark legislation revision — originally drafted by the Governor’s Legal Counsel in 2016 — will eliminate the current regulation forbidding the possession of any sharks in American Samoa, according to a Council staff report, which notes that the revised statute now allows landing of the whole shark, while still forbidding shark finning.

Local rule banning shark fining was implemented in 2012 through an Executive Order issued by then Gov. Togiola Tulafono, but the Council staff report says the rule does not account for those who would catch and eat shark, or the cultural significance of dividing the parts of a shark for customary practices.

The report also says that the revised law is pending approval of DMWR and then requires the department to public notice the revised statute, opening up a comment period for 30 days, after which a town hall meeting will be required if 5 or more comments are submitted from the public.

Another American Samoa member on the Council, Christinna Lutu-Sanchez said that with the current on-going fishing season, she is concerned with the US longline fleet based in American Samoa who end up with a whole shark landing in the territory and then end up being fined. She said this issue has been raised with her by several fishermen.

Frederick W. Tucher, Chief of the Pacific Islands Section of the NOAA Office of General Counsel, which provides legal counsel to the Council, acknowledged American Samoa’s law, which restricts the landing of a whole shark. He suggested that Lutu-Sanchez’s question be directed to officials in American Samoa for the appropriate reply.

Tucher went on to explain the process in which the federal government went through in implementing the Shark Conservation Act of 2010 and writing to states and territories, which has laws banning the landing of a whole shark, that was lawfully caught, to either change their interpretation of their regulations or withdraw their regulations to avoid being in conflict with federal law.

“That process has been very slow,” he said adding that his office and the National Marine Fisheries Service (NMFS) have been in contact with American Samoa “to discuss  rule making that they would undertake that would essentially exempt federally managed fisheries [including shark landing] from the restrictions of their local laws.”

The Council’s three-day meeting in Honolulu concluded last Thursday. It was streamed live online and it was how Samoa News provided coverage of the meeting, which raised a wide range of fisheries issues impacting American Samoa. The 171st Meeting is set for October in American Samoa.