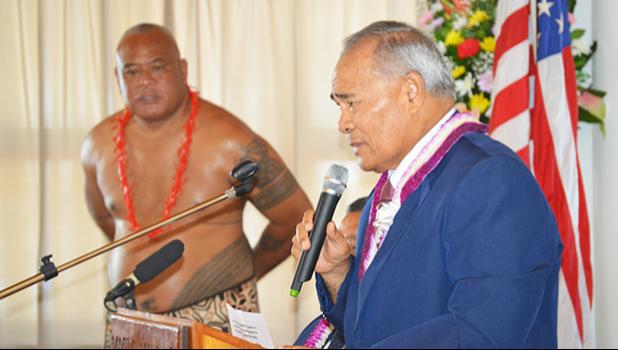 The Lolo Administration is once again exploring the possibility of seeking financial assistance from the US government to subsidize future minimum wage increases — the next one is due in 2018 — because the American Samoa Government simply does not have resources to cover such wage hikes.

The administration first raised the proposal of a US federal government subsidy to finance minimum wage hikes in the territory in 2015, before the current hike went into affect in October of that year. The proposal went nowhere.

In October 2015, federal mandated minimum wages for all 17 different industries in American Samoa increased by 40 cents per hour and the next wage hike is set for October 2018. The current minimum wage for the government industry is $4.81 per hour.

In his official written State of the Territory Address, through a Comprehensive Report, Gov. Lolo Matalasi Moliga says for three years, his administration worked diligently to impede the recent increase of the federally mandated minimum wages.

Although a hike in the minimum wage tends to impact the cannery industry in the territory and the local private sector, Lolo says the administration believes the “quality and living standards and wages of the people need improvements.”

Yet, said the governor, ASG does not have the financial resources to cover an increase in wages. To anticipate this short fall, Lolo said ASG “is exploring on seeking technical and financial assistance” from the US Departments of Labor and Interior “to subsidize the additional ASG wage bill in order to maintain the costs across the board.”

Otherwise, ASG will have to reduce its workforce and implement further cost containments, Lolo said.

Additionally, ASG will continue to pursue further efforts in reviving the previous special industry committee, whose members were appointed by the US Labor Secretary, to determine local minimum wages in the near future.

The special committee had been setting minimum wages for the territory until 2007, when a federal law went into effect in which the US Congress set the wages levels.

Lolo raised the special committee issue in his response to a US Government Accountability Office report released last month suggesting to the US Congress “two basic approaches” for increasing American Samoa’s minimum wages to keep pace with the cost of living in the territory and eventually equaling the federal minimum wage.

Lolo recommended an USDOL-constituted committee, which would include equal membership from both employer and employee, to review local minimum wages based on the territory’s economic conditions. (See Samoa News edition Dec. 7, 2016.)

Not mentioned in the governor’s Comprehensive Report, is the ASG Commerce Department’s living-wage study completed in August 2015, which identifies $5.67 as the minimum wage, needed for a family of six to afford to live in the territory.

However, GAO said in its report, the living wage exceeds the hourly minimum wage for cannery workers by $0.51. And in February 2016, the ASG announced that the local minimum wage for government workers would rise to $5, which is $0.19 higher than the current federally determined minimum wage ($4.81) for workers in this sector.  (See Samoa News edition Dec. 12 for details on living wage)

In 2015, prior to the minimum wage hikes, StarKist CEO and president Andrew Choe told Governor Lolo his proposal to raise local wages only on condition the US Congress provide a federal subsidy to support the rise would most likely violate World Trade Organization rules and would possibly throw the United States immediately into proceedings under anti-dumping and free trade agreements.

Mr. Choe said even if it were possible, such a subsidy would require extra processes like offsetting the spending with tax increases.

He reiterated at the time that the American Samoa economy could not sustain an increase in the minimum wage at the moment.

Samoa News should point out that president-elect Trump has said he is against minimum wage hikes, saying US minimum wages are too high, in light of competing with other countries. So, it is possible that future hikes in the minimum wages of the territory would not continue under the Trump presidency.