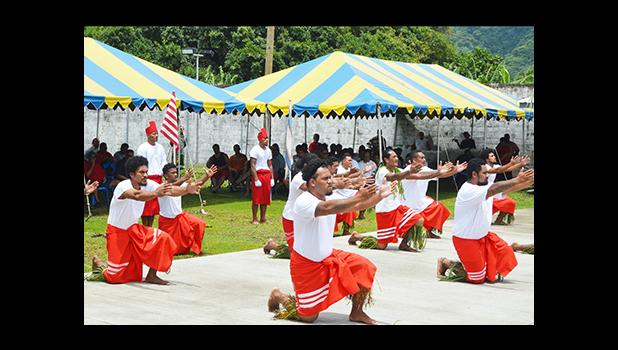 During his annual visit to the Territorial Correctional Facility, Gov. Lolo Matalasi Moliga told just over 100 male and female inmates that the government, especially during the holiday season, never forgets them.

Lolo began the annual Christmas visit to TCF in his first year in office in 2013. During this year’s visit, as in past three years, the governor was accompanied by First Lady Cynthia Malala Moliga, Lt. Gov. Lemanu Peleti Mauga and cabinet directors, along with the Department of Human and Social Services (DHSS) choir.

During his remarks on Wednesday, Lolo informed inmates — who were sitting under tents inside the TCF compound — that the government’s annual Christmas visitation shows that “you are never forgotten day or night” and that inmates are always remembered in their families’ prayers on a daily basis.

Additionally, servants of God as well as the government also prays for inmates and that one day they would be released and reunited with their families and be contributing members of their villages and churches.

He told inmates that each of them is given a gift and talent by the Heavenly Father, who doesn’t want those gifts and talents to be wasted. By being jailed at TCF, the governor says he hopes that it will result in inmates gaining new talents as well as bettering themselves.

Lolo challenged inmates to change their lives around, while in TCF, saying that mistakes made are a lesson that can result in the betterment of the person in the future. He hopes that by the government visiting them, as well as family members of inmates in attendance, is motivation for inmates to become better people and repent for the wrong they have done that sent them to jail.

The administration’s visit included various food items for the inmates and Christmas caroling by the DHSS choir. In response, male inmates — in two separate groups — performed a Samoan siva. As one of the group prepared to start their Samoan performance, in which the dancers had their heads down, while the music started — the audience clearly overheard one inmate saying “ka fia alu i le fale” (I want to go home) — which brought laughter from the crowd.

The governor was also presented with a copy of the Volume 2, Amazing Grace, which is a TCF choir CD.

Prior to the TCF visitation, the First Lady, along with Lemanu, earlier in the day visited the LBJ Medical Center. The annual hospital visit also included the Pediatric Ward, where Christmas gift packages were delivered to the patients.

Lemanu told Samoa News during the visit that it’s always the governor’s wish that government leaders should lead by example, by doing good deeds for others, such as visiting the hospital to share the joy of the holiday season with patients who won’t be home with their families.

Each patient visited by Lemanu and the First Lady at the various LBJ wards, was told that the governor and the government sends “best wishes for the holidays” with prayers that the patients would soon be released and return home.