Lolo: With virus widespread in U.S., “we should't let our guard down” 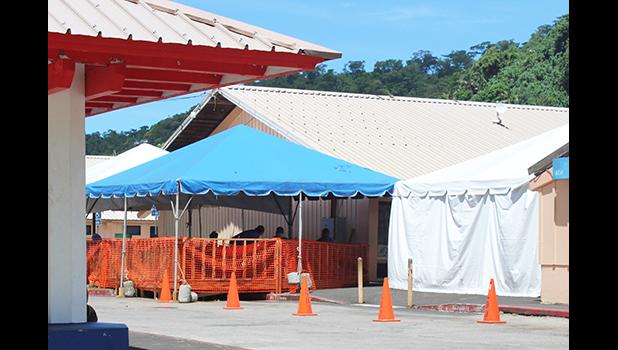 “But my own personal view of what is happening is — as long as Hawaii and the US mainland is not settled with the virus, I don’t think we should let our guard down,” on the current status, he said.

“We may have to make some amendments to local restrictions” when the current declaration lapses May 1st, he said, adding that the continued closure of territorial borders — air and ocean transportation — will be based on what’s occurring off island.

Under current COVID-19 regulations, the governor said America Samoa allows incoming cargo vessels, so that the territory and its people continue to have sufficient incoming supplies, including food, because 95% of goods are dependent on imports.

Faumuina informed the meeting that LBJ is always thinking of when the hospital will get its first case, saying that “one [case] is one too many.”

While the hospital is able to care for that one-patient, he said the concern remains with the person, who brought the virus to the territory and that is a serious concern and what American Samoa will do to prevent the spread of the virus on island.

Dr. Saleapaga pointed out LBJ has two issues, which are very important for the task force and governor to consider going forward, with the current declaration about to lapse.

(Dr. Saleapaga, along with at least two cabinet members at the meeting mentioned June 1st as the date when the declaration lapses, but task force chairman Iulogologo Joseph Pereira said that there appears to be some confusion, as June 1st is the target date suggested by the governor to Hawaiian Airlines to resume flights between Honolulu and Pago Pago, while the current declaration lapses on May 1st.)

The first issue from LBJ, according to Dr. Saleapaga is when the current declaration ends and there are no cases, what is the next step for American Samoa. He suggested putting that plan in writing, submitting it to the task force for its consideration, before it’s forwarded to the governor for approval.

Such a plan should include what should be relaxed on local restrictions, and what should continue, going forward, he said.

The second issue, is American Samoa’s next move when or if there is a positive case when the declaration lapses. “What steps should be taken and this should be in writing,” he said.

Dr. Saleapaga also said what concerns LBJ at this point is that the Behavior Health Center, which has been identified by LBJ as an isolation facility to house and isolate coronavirus patients, has not been converted yet — nothing has been done.

He said the current isolated COVID-19 ward at LBJ has 8 beds, which is not sufficient to address an overflow of more virus-infected residents.

Dr. Saleapaga said a plan should be in place now and to not wait like New York, when the virus spread.

Another important issue to be addressed is the need for additional personal protective equipment (PPEs).

In past task force meetings, there were discussions of renovation of one of the wings at the Health Department compound at Fagaalu to house patients from the Behavior Health Center, which would then undergo the renovation-conversion.

At Sunday’s meeting, Faumuina explained that discussions were held last week with the US Army Corps of Engineers and the Federal Emergency Management Agency (FEMA), and that the Army Corps is preparing a report dealing with cost and renovation of the Behavior Health Center. Once the report is completed it will be presented to FEMA for review and to move the project forward.

Faumuina also says that the pressure negative medical tent arrived last Friday on the cargo flight, and the tent will be used by LBJ to house any overflow of patients, if the Behavior Health Center is not ready to be occupied.

“We cannot wait,” Lolo informed Voigt, who also instructed that the DPW crew to start renovation work at the DoH wing, using local funds and work later with FEMA for reimbursement.

Lolo pointed out that by the time the renovation is done, the virus will have come and gone. He says that it’s been more than three weeks since the discussion of this wing and still nothing has been done.

He says this is one reason for delaying the reopening of air service — is to first ensure there are sufficient facilities to address any virus related issues.

LBJ’s COVID-19 proposed budget, which is included in the ASG’s $16.9 million coronavirus proposals submitted to the federal government, includes an estimated $850,000 for construction to covert the 10 rooms at the Center to “Negative Pressure Rooms” — which remains at 10. LBJ also proposed $20,000 for education and training of staff for COVID-19.