Lt. Gov. delivers emotional speech at medical symposium on cancer in the territory 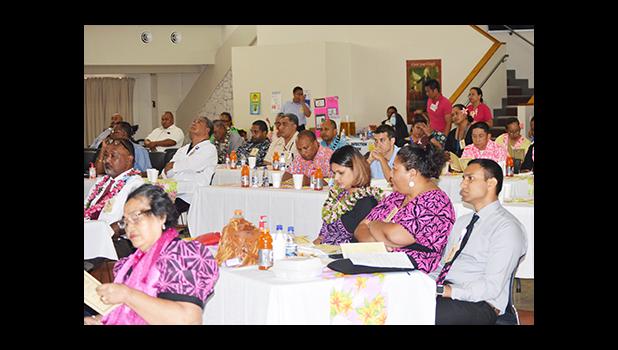 Under the theme ‘Medical Challenges in the Territory: Cancer and Infectious Diseases’, the second symposium, held at Gov. Rex Lee Auditorium and attracted both local and off island medical professionals from both public an private sector, was aimed at providing more current and up-to-date statistical data and relevant information on cancer and infectious diseases and their impact on the territory.

Special remarks from the government wwew delivered by Lt. Gov. Lemanu, who’s wife, Pohakalani Dawn Mauga, passed away on June 30th this year, after losing her battle with cancer. Lemanu told the gathering that he was trying to get away from speaking at the symposium “because it’s an emotional thing for me.”

“I wasn’t sure if I was going to be able to stand up here talking to you about it,” Lemanu said as he became emotional and stopped for several seconds with the audience applauding his courage to still come out to address the symposium.

Lemanu continued with his remarks, saying he searched the internet  and found there’s hundreds of different kinds of caners and he was very surprised because the basic ones he knows are probably less than 20.

“I wouldn’t even imagine the level of researches and coordination and sharing of the resources that you folks go through,” he told the audience and that it “gives me an understanding of what you struggle with everyday. Myself and Governor Lolo appreciate that very much.”

“Cancer is not new. Its been around us for years and years. But I still see the community, the government, the people of American Samoa as I grew up, struggling with this disease,” he said. “We’re here to support and provide... what you need to do to fight this war [on cancer].”

And as he read on the internet about the hundreds of types of cancer, Lemanu said “cancer is a lot bigger than what I thought and that’s why I said its a war. It’s the silent war that’s affecting [us] and will keep going if we don’t come up with solutions... to fight it.”

“The question I keep asking myself — if we knew about cancer way back, for American Samoa alone, why do I see and hear and experience that in American Samoa... there are cancers in stage 4?,” he said. “Maybe the numbers that we find in the early stage are a lot less than the numbers we found out when they’re at the final stage. And I ask myself, what rock haven’t we turned?

“My job, so, as the governor’s job, is to provide you with the resources that you need to fight that war. You’re the experts and that’s the challenge,” he said and noted that he learned two weeks ago that a “good lady” who works at the hospital went to Hawai’i — probably for vacation — and she was diagnosed there with stage 4 cancer.

“That brings me to another point as well. Just because you are doctors, nurses and staff that work at the hospital, that doesn’t mean you’re  lot healthier than I am,” Lemanu said and noted that more questions come up on “why this, why that and what can we do about it [cancer]” but still no solutions.

He told the audience that “team work” is very important in order to come up with solutions to address medical challenges, cancer and infectious diseases faced by American Samoa.”

“Team work, coming together, and working together. If we don’t do that we’re not going anywhere, I promise you that,” he said, adding that team work includes profit and not-for-profit organizations, the government, the community, LBJ, Health Department, and all medical professions.

“If we don’t come together, we’re still going to be in Stage 1, we’re never going to move up to any other stage. And we need to share the resources. Share our resources to move forward,” he added.

Lemanu, at the start of his speech, told the audience that the “pink shirt” he was wearing is the second time that he has worn it. The first time was three years ago, when his wife wanted him to wear it to a public function. He said his wife wouldn’t attend the function unless he wore the “pink-shirt” and he did.

He recalled his wife telling him at the function about seeing something on the internet that says, “real man, wear pink”.

In his remarks, Taufete’e told the audience there are many medical challenges coming from various facets of the local community. “There are financial challenges,” he said, adding, “Our remoteness in the middle of the Pacific from major suppliers and sources of medical  and pharmaceutical supplies  is a continued challenge in the territory.”

Additionally, medical education and workforce, and training development is also a challenge.

“Challenges of access evidence based knowledge, [and] challenges of recruiting more qualified specialized and credentialed employees in the health care workforce,” he explained and the  “challenges of updated policies and guidelines for managing patient [care].”

Another challenge is maintaining the US Center for Medicaid and Medicare “certificate of participation so that we can continue to upgrade the quality health care that we provide for our patients and our course, so that I can maintain access to funding sources.”

And the “challenges of upholding the delivery of quality healthcare and the challenges of educating the public to maintain a healthy living,” are other challenges,Taufete’e said and pointed out that regardless of the what challenges there may be, American Samoa must address those medical challenges head-on and take a stance and act now.

He also said there is a “steady growing increase of infectious diseases in the territory, like the dengue fever and the Zika virus,” he said.  “There are reported cancer incidences of all types. These diseases directly affect the consumers of our health care system.”

The LBJ CEO pointed to what he describes as an “alarming” high number of Zika virus cases in the American Samoa and two other US territories as reported by the US Center for Disease and Prevention (see separate story on Zika in today’s edition printed elsewhere for details).

Taufete’e said LBJ is having to bare the “heavy cost of acute care as patients have no where else to go, besides referring off island, which is a cost prohibited exercise” and he opted  not to get into this area durning the symposium.

“Clearly, there is a significant evidence and data of the medical challenges and continuous increase of infectious diseases,” he said and as CEO, “I see it everyday, may be not as a doctor, but I see the statistics when they come across my desk and I will take the stance to act now.”

He encouraged participants to actively exchange ideas to find solutions for American Samoa, “so we may eradicate the poisonous of these medical challenges, infectious diseases and cancer.”

The two-day symposium closed around 5p.m last Saturday and it’s unclear if a report will be released at a later time on the outcome of the symposium.