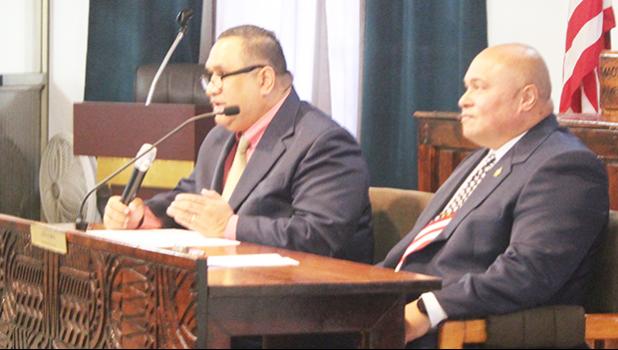 Senators send it back to admin for necessary revision
By
Fili Sagapolutele
fili@samoanews.com

Pago Pago, AMERICAN SAMOA — Several senators have serious reservations with the Administration’s bill, which seeks to amend local law by removing the requirement that the Territorial Auditor — who heads the ASG independent agency Territorial Audit Office — shall be a certified public accountant (CPA), or a certified internal auditor holding a current certificate from any state of the U.S.

Sen. Magalei Logovi’i said the proposal “lowers the bar” for this important post, which is important to the government while Sen. Utu Sila Poasa describes the bill as downgrading the qualifications for the person who holds the post.

The two senators made these comments during Monday’s Senate Rules Committee hearing on the bill, which the Governor’s Chief of Staff, Tuimavave Tauapa’i Laupola told senators is a priority fill for the Administration that has been in office for 7 months.

The last Territorial Auditor was Robert Dantini, a CPA from Washington State, who started in August of 2009, and resigned in December 2012 during the final days of the Togiola Administration, according to Samoa News archives in an exit interview with Dantini at that time.

During the committee hearing, Tuimavave explained that there are about three CPAs in the territory — two of them work in the private sector and the third is currently off island. And the Administration is having a difficult time recruiting a CPA for this post.

Magalei, the committee chairman and former ASG Treasurer, recalled that during his time in government with former Gov. Togiola Tulafono T.A. Tulafono in office, ASG sought a person from off island to fill the post, with assistance from the US Department of Interior and the process involved reaching out to associations involving auditors and CPAs.

He said the only avenue to secure a CPA is by reaching out off island to such an association. He asked if the current administration has expanded its search off-island, to which Tuimavave said no, but noted that this issue remains a priority for the Lemanu Administration.

Tuimavave also gave a verbal statement, which Magalei and two other senators said was confusing when compared to what the bill is requesting.

According to the chief of staff, it’s the Administration’s thinking that the bill, as presented, will have a person to head this office while a CPA is hired to carry out the specific audit duties and functions required by law.

Tuimavave responded that they are “looking for a leader of the office” that can also be a director.

Responding to a committee question, Attorney General Fainu’ulelei Falefatu Ala’ilima-Utu said that this is one of the bills that he told the governor’s legal counsel should have been given to him for review before it was submitted to the Fono.

However, he is supportive of the intention of the bill, after discussion with Tuimavave. Ala’ilima-Utu then went on to address other provisions of the law and acknowledged that he agrees with the committee’s belief in the importance of a CPA for this post.

But the Administration has been unable to secure a CPA, a position for which it is difficult to attract candidates due to the low salary and benefits offered for the post of Territorial Auditor, according to the attorney general.

Utu informed the witnesses that the qualification of the Territorial Auditor is set by law and “we can’t downgrade” it.

Sen. Fai’ivae Iuli Godinet, who disagrees with the proposed changes to current law, says said it’s not appropriate to employ a CPA, whose work will then have to be reviewed and signed off-on by an office manager or head of the Territorial Audit Office.

For the committee’s benefit, Magalei explained that the Territorial Audit Office is responsible for audits of all ASG agencies and a report of those audits is then submitted to the governor and Fono leaders. And USDOI also requests such audits when needed.

The Tualauta senator informed Ala’ilima-Utu and Tuimavave that the salary of the Territorial Auditor can also be funded by USDOI. Additionally, the governor cannot — under the law — fire this person without 2/3 majority approval of the Fono.

He said in a case where this occurs, the procedure is that the governor recommends the reason behind the termination request to the Fono.

Provisions of the Territorial Audit Office law state in part that the territorial auditor and mangers of the office cannot be “actively involved in the affairs of a political party” as well as “actively participate in a political campaign for a public office.”

Magalei told the ASG witnesses he does not accept the Administration’s “excuse” that they can’t find a CPA, noting that there’s associations off island for auditors and CPAs for ASG to tap into to hire a CPA.

He also said the territorial auditor is considered the ASG’s “watchdog.”

The senator said the bill “lowers the bar” on the qualifications for a territorial auditor and he advised all concerned, “let’s not do that.”

At the conclusion of the hearing, the committee agreed to return the bill to the Administration to make necessary revisions.

In January this year, the governor nominated Tofa Sualauvi H. Su’a to fill the Territorial Auditor post. But several days later, the administration withdrew the nomination as Sen. Togiola Tulafono requested that the Senate legal counsel review the credentials and resume for the nominee, to see if the nominee meets current requirements under the law.

The House took similar action, as the nominee’s resume made no mention of being either a CPA or a certified internal auditor holding a current certificate from any US state.

Through a June 30th memorandum to cabinet members, the governor once again re-appointed Tofa to the post of acting territorial auditor.