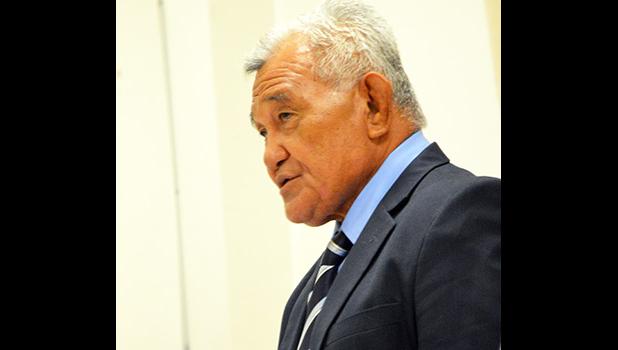 Pago Pago, AMERICAN SAMOA — Chief Justice Michael Kruse has given the Manu’a Faipule Toeaina Faufano Autele 14 days to respond to questions from a plaintiff in a case involving community land in Ofu, Manu’a, and pay $600 for plaintiff’s attorney fees and costs.

Failing to comply with the court order would result in him being held in contempt of court. Kruse also fined Toeaina’s attorney, Matailupevao Leupolu Jr. $200 for failing to inform his client regarding the court order.

The plaintiffs were asking the court to hold the defendant in contempt of court for failure to abide with the court order, where he was to respond to the plaintiffs’ questions regarding the communal family land in Ofu, Manu’a.

Uiagalelei further stated that it is the defendant’s belief that the plaintiff is not a member of the Toeaina family.

The plaintiff’s lawyer then asked the court to sanction the defendant and order him to pay attorney fees and costs of $600.

“What sanction do you want?” Kruse asked Uiagalelei, who replied that he wanted anything that would convince the defendant to answer.

“Hey, don’t give me that! What do you want? Do you want to throw him in jail? Tell me exactly what you want,” Kruse said.

Uiagalelei responded, saying that he wanted the defendant to pay attorney fees; order him to answer the questions and also a period of incarceration for Toeaina.

“Alright, prove your case. You want contempt, is that what you want?” Kruse asked. Uiagalelei responsed, “Yes your honor.”

Kruse turned to the side where the defendant and his attorney were sitting, and asked Matailupevao, “What’s your response?”

Matailupevao then apologized to the court on behalf of his client, for failure to answer the questions.

However, Kruse said, “But he has a duty to obey a court order.” He then ordered Toeaina to take the stand and be sworn in.

When questioned by his attorney, Toeaina told the court, “I did not answer some of the questions because these are privileged questions and the issue is that, the plaintiff has taken this matter to court regarding communal land of the family, but they are not members of this family. These questions they were asking are relating to the Toeaina Family and it’s my understanding that ...”

Toeaina had not finished his answer when Kruse cut him off.

“Ah sir, that issue will come before us during the trial, alright?” said Kruse, referring to the defendant’s claim that the plaintiffs are not family members.

“What do you mean by privileged? The word privileged has a legal meaning?” Kruse asked Toeaina. His response was, “Meaning, the question was about me and my family. They are asking how the money is being spent among the family. The plaintiff here has no blood at all in the family.”

Kruse fired back and told Toeaina that, the issue about the plaintiff being a family member is not before the court.

“That is not before me,” Kruse told Toeaina. “I must assume that they have a claim, so I can’t pre-judge it, and you cannot frustrate the process of this court.”

Toeaina responded, “I apologize your honor, but I’m not trying to frustrat the process of the court.”

Kruse said, “That’s what you're doing. And don’t argue with me. I’m telling you. You’re frustrating the process of this court and I’ll have you serve 6 months in jail. You’ve also admitted refusing to answer questions regarding this matter. I don’t want to hear any more about your decision whether they are members of the family. All I want to know is why you did not comply with the court order.”

Toeaina then told the court that he got the questions but he did not see a court order. What he received was just the set of questions.

“Did you receive that before?” Kruse asked the witness. His response was, “Your honor, I did not receive this document.”

“That is the fault of your attorney and you’re telling me that your lawyer did not do his job?” Kruse asked the witness again. His response was, “I swear I did not see this document.”

Kruse then turned to the defendant’s attorney and asked, “Counsel, who is in contempt of court?”

Matailupevao said, “Your honor, I got the order but I did not give it to the defendant. But I called him and told him that there was an order. I apologize your honor.”

Kruse then ordered Toeaina to pay the amount of $600 for attorney fees to the Clerk of the Court.

“And I’m also ordering you Chief Toeaina, you have 14 days to respond to the … questions and file it to the Clerk’s office. Failing that, I’ll bring you back and hold you in contempt of court. By July 5, you have to respond to this matter. Do you understand what I’m saying?” Kruse asked.

Kruse then turned to Matailupevao and said, “Alright counsel, I’m going to fine you $200 for failure to advise your client about his court order.”

Kruse was assisted by Associate Judges Faamausili Pomele and Muasau T. Tofili on the bench.