Medical flight target of complaints from some non-med passengers 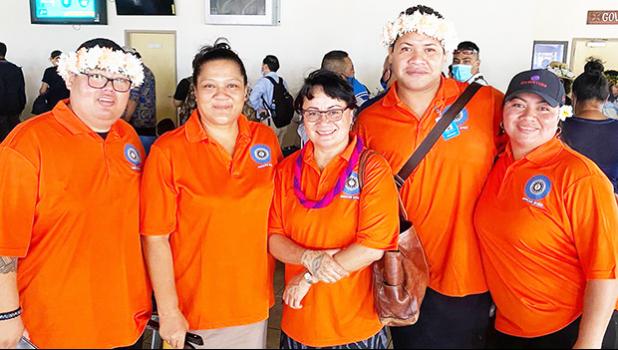 Pago Pago, AMERICAN SAMOA — Despite being given fair warning by the Medicaid State Agency, as well as local news reports, some non-medical patients on the Oct. 26th medical charter took their complaints and criticism to social media after having to pay the required Medicaid cost-share of $920.

Samoa News also heard its share of such criticism from US residents returning to the US on the charter — not only towards the governor and the COVID-19 task force but also the American Samoa Medicaid State Agency, with some saying that they should have been allowed to travel on their return tickets on Hawaiian Airlines, which operated the charter.

Criteria and details of the flight — especially the cost-share — was the same as the first medical flight in July. And this information was clearly articulated by the Medicaid Office in its press statements — also posted on social media — prior to the charter.

“I think it is important for the public to understand that the Medicaid Cost Share is a federal law requirement that we must impose on people allowed to go on the charter,” said Medicaid State Agency director, Sandra King-Young, who points out that she raised this issue again “because a couple of passengers who left on the charter criticized and complained about it on social media even though we explained it.”

“First of all, Medicaid would prefer that no one else goes on the medical charter other than Medicaid eligible patients and eligible escorts,” she said yesterday responding to Samoa News inquiries. “This complicates the work of our office with all the paperwork and cost share justification.”

No matter the number of patients, “Medicaid will pay 100% of the total charter cost so long as ALL passengers are Medicaid patients and escorts,” she explained.

“However, once we open the flight up to NON-MEDICAID travelers — i.e. students, repatriation passengers and even VA Tricare patients — then the federal rules for non-Medicaid cost share is triggered,” she points out.

She explained further that the US Centers for Medicaid and Medicare Service (CMS) requires the local office to do this and to report on it.

“We must calculate the cost share based on available seats and cost of the charter and any available cargo,” she said and thanked Gov. Lolo Matalasi Moliga, for it was by his request “to further help our people, that we offered the seats not used by Medicaid patients and escorts, to all others wishing to leave the island based on priority set by the [local] government.”

And CMS “approved this as it was deemed a public service” given that local borders are closed, to allow non-Medical passengers to go on the medical charter.

“Keep in mind, that there is no obligation of Medicaid or the [local] government to put non-medical passengers on the flight if they do not want to pay the cost share,” she explained.

Because this is considered a “private charter, there is no need for Medicaid to provide food either other than what is generally provided by Hawaiian Airlines — no matter what the cost share is,” she said, noting that a passenger also complained about paying the $920 cost share and getting little food.

King-Young said the charter flight took 272 adult passengers plus 6 lap children — and two of the lap children were patients. There were 113 patients, 69 escorts — but not all were Medicaid eligible: 3 patients withdrew from the charter while two other patients were re-admitted to the hospital on the day of the flight.

Second, the US Transportation Security Administration (TSA), which handles security screening at the airport, only had one scanner working and they only opened up their screening at 11a.m when the flight was scheduled to arrive from Honolulu at 12:40p.m.

She said it would have been helpful if TSA opened up earlier at 10a.m as was requested with the federal agency to screen passengers early. She said that nearly 150 passengers had opted for the early immigration check-in but it ended up not being useful as everyone had to wait for the TSA security check line to open.

Samoa News also asked as to the type of problems/ issues the local Medicaid Agency faced with this second charter and how they were addressed at the time.

“The challenges we faced we addressed the best way we could,” she said citing for example, the elevator in the ASTCA building in Tafuna — where the Medicaid office is housed —  has been down going on 9 months.

She noted that patients cannot walk up the 3 flights of stairs at the office at the ASTCA building in Tafuna.

Therefore Medicaid staff were based at the LBJ Medical Center to screen patients. “This turned out to be a good thing though because it saved a lot of time and helped expedite approvals of patients,” she said.

Another example, is waiting for US visas for non-Medicaid patients and escorts as “this delays our screening procedures but also when patients or escort visas are denied, it leaves little time for us to get another passenger on the flight,” she said.

She also said that Hawaiian Airlines checking passengers at their cargo building was challenging because the renovations at the main check-in counters at the airport terminal were not completed.

“Thankfully,” with the help of the airline, Airport Security and Port Administration, “we were able to smoothly check in people using a numbered system and setting up tents and chairs at the Hawaiian Airlines cargo building for people to queue up,” she said.

And the final issue the Medicaid Office had to address is that patients and passengers were not wearing their masks on the plane.

“Delay in complying with mask requirements can delay departure of the flight,” she added.

Late last week, the Medicaid Office posted a Thank you message on its Facebook page to all those who made it possible for the second charter flight to happen.