More power to ASPA — and Western District of Tutuila 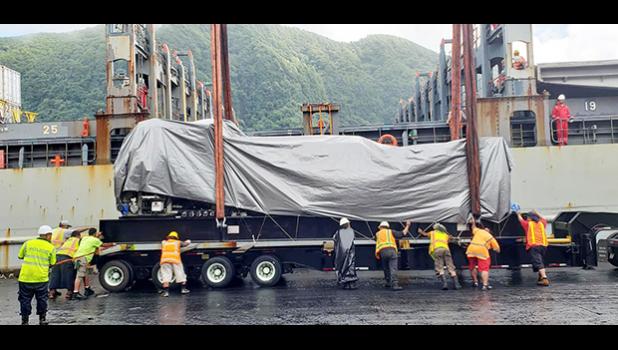 Pago Pago, AMERICAN SAMOA — This photo shared on the American Samoa Power Authority Facebook page shows one of the two-new GE Generators being off-loaded on Wednesday from a container vessel onto a trailer at the main dock at the Port of Pago Pago. The two new generators, which ASPA says are paid for with local funds, are currently at the service-wharf area of the main dock, and will be moved from the main dock to the Tafuna power plant on Sunday, Aug. 16th from 9a.m to 5p.m and may cause traffic slowdown or even stops at times.

In a statement earlier this week, ASPA asked the public to plan accordingly to avoid delays or being stuck in traffic during the hauling time and date. And if at all possible, avoid driving between these areas, as the traffic will be slow.

ASPA explained that these two new engines are essential to the operations at the Tafuna Power Plant as they will provide the much needed load security ASPA needs to serve customers on the west side of Tutuila.

Once complete, the two new GE Generators will be a great addition to the 3 new Cummins Generators ASPA put online in July 2020. These 5 new generators replace the old Deutz Generator engines that have served the community for many years.

These two additional engines  — destined for the Tafuna power plant — are similar to what ASPA is currently using at the Satala Power Plant, according to ASPA, which apologizes in advance for any inconvenience caused by the hauling of the generators on Sunday and asked the public for their patience.