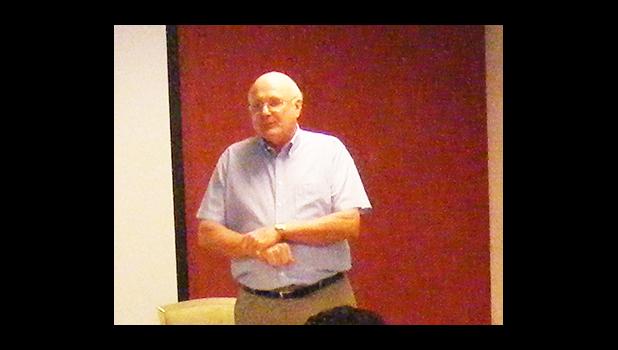 ASG should focus on developing a technology park — it’s one of those missed economic opportunities
By
Fili Sagapolutele
fili@samoanews.com

Former Chamber of Commerce Chairman David Robinson says American Samoa has some missed economic development opportunities and believes the most important one deals with technology including the development of a technology park.

Robinson is retiring and moving to New Zealand at the end of the month after spending 12 and half years in American Samoa, which he visited more than a decade ago, just for a year-long stay but ended up staying much longer.

And over the years Robinson didn’t hold back on commenting, when contacted by the local or regional news media, on a wide range of issues especially those dealing with the private sector and economic development. He has also become the outspoken voice of the Chamber during his six terms as chairman and even when he is not.

Besides the Chamber, Robinson served on various groups including co-chair of the Governor Economic Advisory Council during the Togiola Administration, chairman of the Hope House board since 2009 when the Sisters of Nazareth pulled out, chairman of the Pacific Horizon School, former chair of the ASG Shipyard Service Authority and American Samoa Rugby Union Treasury. He also served on various ASG boards as a member including Renewable Energy Committee and Health Care Transformation Task Force.

He was also president of four companies and most recently general manager of Aeto Insurance and Finance Company.

“I was involved in a lot of things and I also did a lot of work during the Togiola Administration on economic development through the Advisory Council,” he said during a Samoa News interview on Monday. “And all these involvements [locally] has kept me here all this time.”

He then said, “It will be a continuing disappointment to me, that a lot of suggestions, a lot of the ideas for economic development and improvement on new investment have never been picked up by the Administration.”

“I think the present administration is too busy with their ideas, their own agenda and they haven’t necessarily embraced the private sector as frequently as they should have done in my tenure,” Robinson said.

Asked what kind of opportunities he believes American Samoa missed out on for economic development in the last 12 and half years, Robinson said, “We missed out on every thing, really. The key to economic development is to create investment, which is going to provide job creation. Once you get that, people have money in their pockets to spent and flows on to the economy.”

“And I think, that we should have concentrated and focused more on technology,” he said, adding that the “call center was a classic example with an industry which can accommodate higher costs than some of the others. The development of a technology park has been an incubator for developing the talents of youngsters, who in these days are pretty tech-savvy. And they know how to deal with technology, in communication, software design and all those sort of things.”

(A couple of years ago during the Togiola Administration a mainland company worked with ASG to set up a call center but that didn’t materialize. Last year, an off island firm sent a team to look at American Samoa for setting up local operations, similar to a call center, but there has been no recent developments on this project.)

“Those sort of things employ a lot of people. And once you start employing a lot of people, it strengthens the economy,” he said and noted, “not all our youngsters these days want to be farmers and fishermen, it doesn’t appeal to them.”

“But anything that has to do with technology, they’re keen and they should be given the opportunity to get employment in those areas,” he said.

Asked if he thinks technology is one of the biggest areas of economic development that American Samoa has missed out on, Robinson said, “I think so,” but added, “it’s difficult here, we’re quite isolated in terms of geographical proximity and it’s not easy to find things for new investment — there’s no doubt about that.”

While he acknowledged that it’s difficult, but “I think the effort has not been made” to focus a plan on technology for economic development in American Samoa.

Asked if there is a pool of talent to be attracted to the territory if economic development is more focused on technology, Robinson said, “I think so. I think if we would have set ourselves up as a technology-providing area, we would have been able to bring them in.”

“I think that’s what we should be looking at doing,” he added.

Other issues covered in the Samoa News interview will be reported on in future editions.

Last December, when Robinson was the Chamber of Commerce chairman, he revealed during a Chamber meeting that the business group had recommended that the government’s Territorial Plan for economic development focus on development of technology, because of the opportunities available for American Samoa’s younger generation.

Robinson said that last July the Chamber submitted proposals to the ASG Commerce Department to assist with the development of a new 10-year Territorial Plan.

“So the thrust of our proposal to DOC was in two parts: one part is privatization which has been a thorn in the side for a long time; and the second part is look at developing a technology park and developing opportunities for new investment by companies who are involved in technology,” he said.