New Attorney General unanimously confirmed by both House and Senate 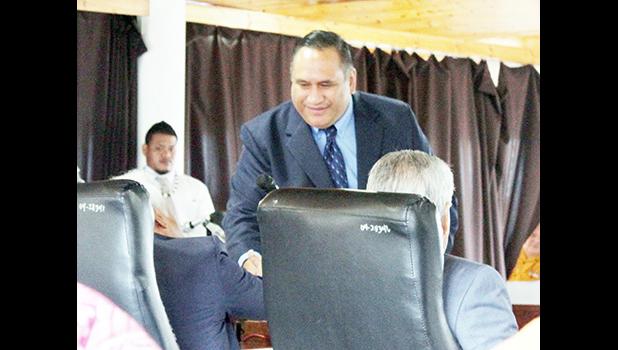 Pago Pago, AMERICAN SAMOA — Local attorney Fainu’ulelei Falefatu Ala’ilima-Utu is American Samoa’s new Attorney General, under the Lemanu Administration, after being confirmed Wednesday by the House of Representatives in an 18-0 vote and endorsed yesterday by the Senate in a unanimous vote — also of 18-0.

The Attorney General is also the director of the Department of Legal Affairs, which includes the AG’s Office and the Immigration Office.

Prior to the Senate vote during its regular session, Fainu’ulelei appeared earlier in the day before the Senate Judiciary Committee for his confirmation hearing, where the nominee informed senators that he is honored to be appointed to the post and that he has been an attorney for 30-years.

And if confirmed by the Fono, he promised to continue to dedicate his life of service to the community and government for the benefit of Tutuila and Manu’a.

The first question for Fainu’ulelei, who recently served as executive director of the American Samoa Legal Aid, came from Sen. Soliai Tuipine Fuimaono wanting to know the nominee’s view and opinion on having the territory’s Attorney General elected by voters.

Fainu’ulelei responded that the current law and protocol is in place and he sees no problem with it.  And he believes that Gov. Lemanu Peleti Palepoi Sialega Mauga will always follow the law, as he was sworn in on Jan. 3, 2021 to uphold the law and constitution.

“You’re new” to the post, Soliai told Fainu’ulelei and reiterated his claims that a sitting governor has the final say on decisions by an attorney general. And if confirmed by the Fono, Soliai advised Fainu’ulelei to also follow the law and oppose anything that is against the law.

Samoa News notes that issue of electing the attorney general — instead of being appointed by the sitting governor — has been discussed in the Fono, in the community and elsewhere over the years. There was even legislation debated in the Fono on this same issue but it never made it out of committee.

Before joining the American Samoa Legal Aid, Fainu’ulelei served as legal counsel for the Development Bank of American Samoa for 11-years from January 2003 to March 2014. Prior to that, he was assistant attorney general and acting attorney general with the ASG Attorney General’s Office from June 1990 to January 2003. He was also in private practice.

A majority of the senators who spoke during the 30-minute hearing commended the governor for his attorney general-nominee, who was urged by the Senate to follow the law when decisions are made. Fainu’ulelei was asked to remember the agency’s workforce, which is the “backbone” of the agency.

Sen. Magalei Logovi’i requested Fainu’ulelei to look into a “pyramid scheme” occurring in Samoa and has spread to American Samoa. Magalei said he has received complaints about the scheme, where there is concern of this “fa’ama’i” — or disease — spreading to the territory.

Magalei didn’t give specific details of the scheme, but says he is not sure whether it’s the AG’s Office or ASG Treasury’s responsibility on such issues.

Samoa Global News reports this week of about four separate schemes that all are pyramid in nature because of the necessary requirement to recruit more people and create more ‘legs’ — or “su’e ni vae”.

After this Samoa Global News report was published in Samoa News on Jan. 20th in Pacific Briefs, one female American Samoa resident told Samoa News that this “game” started in the territory around December last year.

The Samoa government’s Central Bank early this week issued a warning to pyramid scheme operators that they face criminal charges if caught by a Financial Intelligence Division investigation.

The warning comes after the bank received a report of people involved gifting and re-gifting money in a suspected pyramid scheme, according to Radio New Zealand Pacific, which also reports that a number of sources said people had also been asked to invest $US25 and in 10 days they would receive $75 — and the more people that registered the more money received.

The Central Bank has warned that the scheme could end with people losing their money.