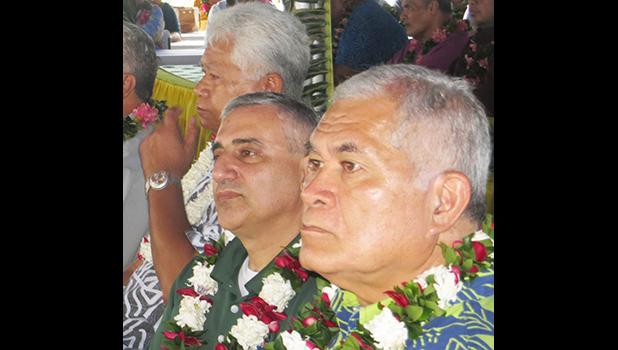 The ASPA executive director Utu Abe Malae at yesterday’s dedication of the new Satala power plant said the new plant is the replacement to the one destroyed in the 2009 tsunami, only it’s located on higher ground and has new design features.

“For example, it is quieter and so less of a nuisance to our neighbors. There is a horizontal portcullis to protect the engine room from flooding,” he said, adding that the engines burn Ultra Low Sulfur Diesel, which results in cleaner emissions.

“In fact, very soon all the ASPA diesel power plants will be burning that kind of fuel,” he pointed out and noted that he has been told that the Environmental Protection Agency is “pleased with that development and so should we all.”

He shared that the procurement process was complicated and difficult to coordinate.  For example, there are two contracts: one for the power generating equipment and the other for everything else. “You start building the structure to house the engines which arrive on island at a later time,” he said. “I do not recommend this kind of arrangement unless you are a masochist. Imagine shopping first for the chassis and frame of a pick-up truck, sans engine, and then bidding out for the engine to be installed at a later time?”

For the generating sets, three engine manufacturers were short listed in the bidding —Korean, Japanese and American companies. All were excellent proposals but General Electric USA edged out the other two in the end.

He said the GE engines fuel consumption efficiency is about 20% better than that of the generating sets at Tafuna Power Plant. Another US company, Texas Power, did the power plant equipment installation.

“We held a town hall meeting for the Satala neighborhood in late 2013 and listened to the concerns of the families: There were three things of primary concern: the noise, the smoke, and the access road that needed improvement. We took care of all three major concerns,” he said.

“I believe this a sizable project for a small place such as ours,” he said and went on to thank the many to contribute to the successful completion of the project. (See elsewhere in today’s edition for more photos and reports on ASPA’s Satala Plant dedication.)

PARAMOUNT BUILDERS PRAISED FOR ITS WORK

US based Louis Berger Group was the prime contractor for the $56 million project, while Paramount Builders was the local building construction for the facility, located around the same area as the old plant, which was destroyed in the 2009 tsunami.

The facility is “very complicated. It has very complex engineering... from the structure, to the marine environment, and to the electrical components to it,” said Raymond J. Mardini, senior vice president for operations at Berger Group’s Power division, in his remarks at yesterday’s dedication.

“And what you see here was actually built by local Samoans for American Samoa,” he said to the applause from the audience, which included Gov. Lolo Matalasi Moliga, Secretary of Samoan Affairs Mauga T. Asuega, several cabinet directors and others.

“We are grateful to our on-the-ground partner, Paramount Builders,” Mardini said.

In his speech on the overview of the project, ASPA executive director Utu Abe Malae said, “I take my hat off” to Paramount and its owner Papali’i Lauli’i Alofa as well as Louis Berger for the hard work as well as completing the concrete project facility “improving the concrete workers skills.”

During his special remarks, Lolo also thanked Louis Berger and Paramount for getting the project completed, and it was only achieved through the collaboration between the prime contractor and our local contractor, and ASPA.

As part of his brief speech, Mardini thanked ASPA and Utu for their partnership and friendship “in this great undertaking” and Louis Berger is “honored and humbled by your trust in us.”

He said that yesterday’s event was not just “dedicating a power plant, but honoring everyone who made this state-of-the-art plant a reality”. And, in close partnership with ASPA, “we hope we have helped fulfill the promise of a brighter American Samoa,” he said, adding that the new power plant, “will bring a permanent, reliable and resilient source of power to the island.”

He explained that the power plant is built on higher ground, has storm doors — there are two of them — to mitigate future flooding and earthquake resistant. He says the plant also potentially will lower energy costs for American Samoans and businesses.

He noted Louis Berger Power’s slogan, which is “Solutions for a Better World.”

“As a global firm with experience working in remote and island locations, we hope that in coming to American Samoa, we have brought our solutions to create a better world for every American Samoan on this island,” he said.

“We want to leave the communities in which we work with greater economic opportunity, a more reliable source of power and a better trained workforce,” said Mardini. “We came to American Samoa to work on a project and will be leaving with a greater sense of community and purpose.”

“For that, and your faith in us, we thank you for allowing us to be part of this important project to fuel your future,” he concluded.