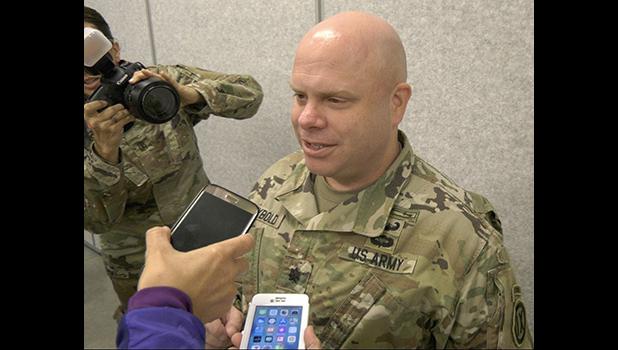 JOINT BASE ELMENDORF-RICHARDSON, Alaska – Typhoons, earthquakes, and active shooters. These are some of the actual scenarios that Soldiers trained on during the first Army Reserve emergency response exercise.

“What I envisioned with Exercise Rapid Response was to have cognitive facility readiness, facilities prepared for emergencies, specifically my detachments that are spread over the Pacific,” said Col. William Nutter, commander of the TSG. Nutter and his team planned and hosted the exercise.

Nutter previously worked through several real world emergencies, including the 2015 Chattanooga shooting at the Armed Forces Career Center and most recently, the Hurricane Gita response in American Samoa.

"I saw the need for facilities to be responsive to take care of our Soldiers, Families and Civilians in an emergency crisis," Nutter said.

Emergency responses to unexpected events such as aviation mishaps, earthquakes, and active shooters require a multitude of agencies to work together. Through proper training, Soldiers face these unfortunate incidents better prepared.

As part of the exercise, participants were given Federal Emergency Management Agency training instructed by Carl Sizemore and Krista Paul, emergency management program coordinators. The FEMA classes taught Soldiers how they could integrally function with community agencies, organizations, and businesses in coordination with emergency management and traditional mass care providers in times of disasters.

“If they ever have to do any events that involve local governments, they understand the terms they’re using. In the military, we have different terms. So if they have to be liaisons, they know what their jobs are,” Paul said.

“It’s an overview. It just helps them with the whole terminology,” she added.

To ensure they understood the material, the Soldiers’ knowledge of the course was constantly checked through practical exercises and group discussions.

“It brought into perspective of what FEMA does and how the Army Reserves can play a role in assisting FEMA,” said Staff Sgt. Xavier Garcia, exercise operations manager.

Following the FEMA course, Soldiers were then placed in teams in simulated areas such as Guam, The Mariana Islands, and American Samoa and applied their knowledge and skills involving simulated real-world crises.

For example, the American Samoa team had to respond to a plane crash, whereas, Alaska had to confront challenges following an earthquake. Moreover, the teams encountered mock media ambushes in which they had to respond appropriately and honestly.

At the conclusion of the exercise, Soldiers made several recommendations for future training.

New acts as a liaison between the Reserve and civil authorities.

“The Soldiers have drive, they have the capability of becoming very good at responding to different types of emergencies,” New commented.

“I think the exercise captured what we wanted to capture, we wanted to test their battle books, for the response plans, for the facilities. I think it was great training,” Nutter said.

“It’s been great to see a vision that I came into as a commander, but I could not do it without all the teams that’s here, and that ended in a very effective exercise and I hope to see it grow more,” he added.

All agreed that the exercise was a success and plan to conduct similar training soon. The next emergency response exercise is tentatively planned for Guam.