Repat passengers form strong bonds as they face the future together 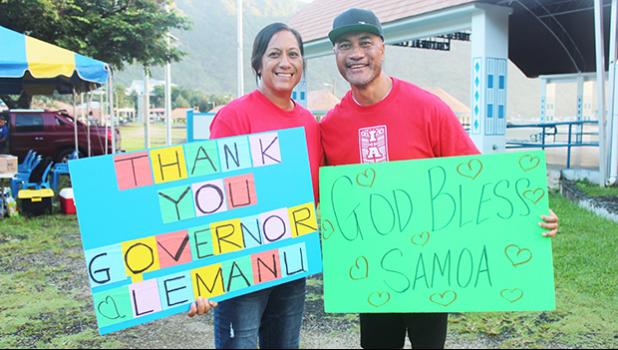 Pago Pago, AMERICAN SAMOA — Repatriated passengers were strangers at the outset but they bonded and become “family”, leaning on each other and helping along the way, as they entered quarantine in Honolulu. There the bond was strengthened while waiting for confirmation from ASG for whether they would make it onto the repatriation flight, according to the American Samoa residents formerly stranded in the U.S since the borders were closed last year due to the COVID-19 pandemic.

And it’s that same “family-bond” — although not blood related — with love and support from fellow repatriated passengers and others that helped the Iafeta family ease the burden on their shoulders. It was a member of their family — Siave Iafeta, the father who tested positive of COVID-19 while in quarantine last month at the Tradewinds Hotel — who along with the rest of the family was quarantined for up to 14-days at the Health Department’s Alternate Care Facility in Tafuna.

“We were strangers and we came back [home] and came together as a family. It’s like we’re all from the same parents,” said Siave Iafeta during a brief Samoa News interview last Friday morning at Utulei, in the midst of the Tagata Tutu Fa’atasi Alliance of American Samoa’s (TTFAAS) third “Thank You Wave” following last month’s repatriation flight bringing home 233 local residents who had been stranded across the United States.

As in the first two-TTFFAS waves, the one last Friday morning, during the peak morning hour drive, with motorist honking car horns, was to express “simple gratitude” — first to “God for bringing us home safety” and second to the government — Gov. Lemanu Peleti Palepoi Sialega Mauga, Lt. Gov. Talauega Eleasalo Ale, DoH and others for bringing local residents home, according to Mr. Iafeta.

“We are grateful. We’re here to show our love and support, not only for our island, but for future repatriation trips, making sure all our citizens come back,” he said as he was joined by his wife, during the Samoa News interview, and who also praised all those involved in the repatriation program.

Samoa News has heard from several repatriated travelers that they have all become a “family” throughout their “journey home”, starting with quarantine in Honolulu and then here in the territory. They, along with their relatives, also posted similar messages of the “family” bond on the TTFAAS Facebook page, which has been the connection for local residents stranded across the US since flights were suspended in March last year between Honolulu and Pago Pago.

When asked, the Iafetas acknowledged and confirmed that the repatriated passengers became family, starting out as strangers but coming together during the repatriation process.

Staci Iafeta pointed out that there are “so many good people” during the repatriation process. “And I think when good people are gathered together in one cause, you can’t help but feel the strength, just the sustaining of the processes that you’re going through,” she said. “I’m sure it’s hard to lead this type of a process. So if there’s anyway we could help in the future, we’re here.”

Siave Iafeta quickly added, “And also, recognizing the struggle that we all went through. It was hard to get here. It was a struggle. We had to come together as a family to strengthen each other to be able for us to make it here. And also to encourage and to uplift and support those who are on their way here. They will be struggling as well. But, we can tell them — ‘We did it. They can do it as well’.”

During Flag Day weekend, the governor announced in a televised address on Apr. 18th that one of the passengers on the third repatriation flight had tested COVID-19 positive and that the man, who tested positive, and his family were isolated from the rest of the passengers.

The COVID-19 Task Force in follow-up statements explained that the traveler contracted COVID-19 at the end of last year on the US mainland and he recovered. The traveler then tested negative three times in the Honolulu quarantine but when he received his first test here, it came back positive. (Samoa News has published the follow-up statements or press releases from the task force on this issue.)

Another news release from the task force said that the “non-contagious” positive father and family members were placed in isolation while the rest of the third repatriated passengers were released from quarantine on Apr. 23rd.

The Iafetas — who were released from the Alternate Care Facility just in time for last Friday’s wave — confirmed during the Samoa News interview that Siave Iafeta was the one who tested positive here.

(To protect the family’s privacy and abide with federal privacy health laws, the task force never revealed the identify of the traveler who tested positive — nor did the TTFAAS Facebook posting which offered support for the Iafeta family.  Samoa News points out that health officials in all states and territories also don’t reveal the identities of those who test positive for the same reason.

When asked if the “family” support and love from among the repatriated passengers helped them through after testing positive here, Siave Iafeta responded, “Yes. Everyone supports each other, and encourages each other, and stays positive. Because you’re traveling, you’re in the midst of the COVID, you never know what could happen to you. So it’s very important.”

“Now for us and I am going to say it on the record,” he declared that “we had COVID but we were able to recover and you can... continue to live a normal life still, and you would not be contagious. Once you get it, you have small residue [still] in your system. It stays within 90-120 days, but you’re not contagious.”

“And that’s what we want to teach our people. That you can still live in the COVID situation, understand it, [and] educate yourself, that you can overcome it and continue a normal life. Get vaccinated, [use] face covering, social distance, wash your hands, [and] if you’re sick, stay home,” he pointed out.

Asked how she and the couple’s three children reacted when the father of the family tested positive during quarantine here, Staci Iafeta responded, “I think for us, again, it’s just really the love of those around us that really sustains you through that process because really, as a passenger, you know a little bit compared to all that’s going on.”

“People are reaching out saying ‘hey this is what I did, try this, go here and help each other’,” she said, noting that this communication fills the gaps.

The Iafeta family expressed great appreciation to Dr. Cecilia Alailima of DoH, who was among the ASG medical staff in Honolulu when the repatriation program started. She is currently on island.

“If there is anything I want to put in there, I want to put out kudos, a big warm thank you to Dr. Cecilia Alailima. She is the Mother Theresa for all of us. Very educated, very knowledgeable and a very sweet loving personality,” Siave Iafeta said. “She was able to calm us when we did go through the positive situation to explain it, explain it to everyone who were also worried about it.”

“From the Iafeta family we love you so much Dr. Cecilia Alailima,” he said, and echoed by his wife, who added that there are so many who love Dr. Alailima.

As of late last week, the COVID-19 Task Force announced that the fourth repatriation flight from Honolulu is set for May 12th.