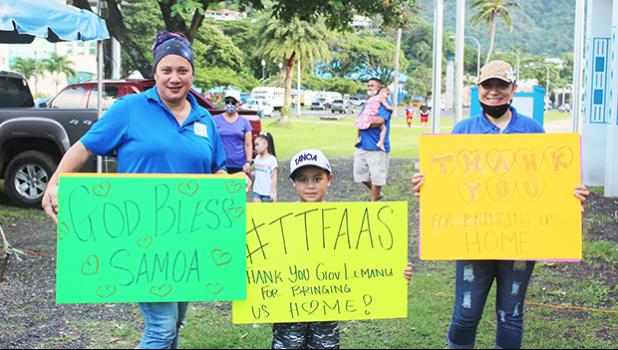 Pago Pago, AMERICAN SAMOA — To keep the momentum going and to ensure that all local residents stranded in the US are able to return home, Tagata Tutu Faatasi Alliance of American Samoa’s local members, along with family members, friends, supporters and repatriated passengers — returned last Friday morning for another Alliance “Thank You Wave” at Utulei.

It’s the second wave since the Lemanu Administration launched the repatriation flights brining home the hundreds of local residents stranded across the U.S. since flights between Honolulu and Pago Pago were suspended on Mar. 26, 2020 — one year now — due to COVID-19 restrictions.  The first wave last month was also organized and spearheaded by the Alliance, the group formed and launched last year pushing the government for repatriation flights to bring home stranded residents in the US.

Among those at last Friday’s Alliance wave was Veronica Vaouli-Gasio, a member of the Alliance and she along with her husband, Keso Gasio and the couple’s three-children were among the 188 passengers on the second repat flight on Mar. 10th.

The Alliance, on its Facebook page which helps connect stranded residents, and family members, put out a call last week about the wave.

“And the purpose of the wave is hopefully to have them continue repatriation flights. We want to bring everybody home. That’s what the Alliance is all about. We just want everybody to come home and reunite with their loved ones,” she said as passing motorists honked their car horns to the waving Alliance group and their friends who stood on the side of the road with placards carrying various thank you messages.

The largest Thank You banner — from the first wave event — was also very visible spelling out the message, “THANK YOU GOV & TF FOR REPATRIATING US,” held by supporters along Utulei road. The “TF” on the banner, refers to the ASG-COVID-19 Task Force.

Vaouli-Gasio and her family traveled from California to Hawaii. “For those of us who are stuck outside of Oahu island in Hawaii, we have to check-in the day before [quarantine], so we have longer quarantine than those who are in Hawaii, by an extra day,” Vaouli-Gasio said during the Samoa News interview.

The ASG repatriation program requires a 12-day quarantine at a designated Honolulu hotel, so for those coming from the US mainland, that means 13-days. Residents stranded on the mainland, as well as their family members have shared messages on the Alliance’s Facebook page of what they had to go through and what needs to be done prior to arrival in Honolulu.

Many of them requested ASG to give them advance notice of being selected for the repatriation flights so they can meet all the requirements needed before arriving in Honolulu.

Asked to comment on some of the challenges that she and he family faced traveling from the mainland to Hawaii, Vaouli-Gasio, “honestly, a lot of it has to do with preparations to come. We have to get our 72-hour COVID-19 test prior to arrival in Honolulu.”

She said getting appointments in time in order to get COVID-19 tested “was a pretty much a hassle for me.”

Vaouli-Gasio shared with Samoa News she prepared in advance not knowing whether they were going to be selected for the second repatriation flight.

“When I first heard, that there was going to be a second flight, I made appointments without even knowing if I was going to be on the flight,” she said and pointed out that she had to be prepared  “because I was not just traveling by myself — it was myself, my husband and our three children.”

“It took a lot of preparations for us to get to Hawaii. I had to get our appointments done. And another [thing], is our health declaration form, which has to be signed by a physician off-island. That’s another issue in itself, we had to find physicians that would do it,” she explained further.

“For those of us who don’t have insurance, it was hard because we’d have to pay to find a physician to sign the declaration form before we get to Hawaii,” she said, adding that its now a full-12 months — from March of last year — that they were stranded off island.

She and her family, as well as others who are back home are happy and pleased to be united with their families. “I’m ready to start working,” she said adding that she was hired by LBJ Medical Center, while stranded off island and she will be starting soon at the hospital.

The next repatriation flight from Honolulu is set for Apr. 15th and the COVID-19 Task Force had announced recently that they were looking at 200 to 220 passengers on that flight.

Meanwhile, the American Samoa Government’s website — americansamoa.gov — has new a Homepage picture and link as of last Friday morning, which is the Repatriation Online Cost Share link.

The same homepage photo/ link initially appeared on the website around 3a.m. on Mar. 20th — which was also observed by Samoa News and others off island. But five-hours later, the link disappeared and there was no explanation given at the time as to what happened to the link. Stranded residents, who had noticed the link-page had inquired about what happened to the link.

The COVID-19 Task Force said in a news release last week following its Mar. 22nd meeting, that payment of flight cost share and quarantine costs can be made via PayPal or at the ASG Revenue office located at the A.P. Lutali Executive Office Building in Utulei.

It also says that more information will be available once the government’s PayPal page goes live. And passengers will be informed about these payments and other travel procedures when the Health Department contacts them that they are on the flight.

Cost-share for stranded residents on repatriation flights is $500, according to the news release. (See Samoa News edition Mar. 25th for details.)