Rev. Tuilaepa recounts his ordeal in the waters of the Aunuu channel 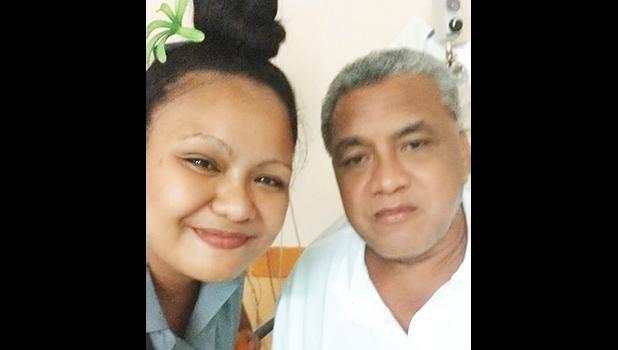 Without God’s protection, we would have been unable to make it
By
Ausage Fausia
ausage@samoanews.com

Pago Pago, AMERICAN SAMOA — One of the 17 surviving passengers from last Monday’s tragic accident between Auasi and Aunuu island after an alia boat carrying about 20 passengers capsized in rough seas, killing two people — has spoken out about his dramatic rescue after spending over two hours in the ocean.

Samoa News was able to sit down with Rev. Samuelu Tuilaepa of the Aunuu Congregational Christian Church of American Samoa (CCCAS), in a one-on-one interview at his home in Tafuna, one day after he was discharged from the LBJ Hospital.

According to Rev. Tuilaepa, it was the mighty hand of God that saved his life, along with other passengers who were able to survive this tragic incident.

“Everyone was panicking when a big wave came into the boat. Not only was the boat sinking but it also was damaged due to the strong waves. I heard people crying in fear. I just can’t believe what I saw that day, but I know for sure that it was the mighty hand of our loving God that saved us. To my two beloved brothers who lost their lives during this incident, may you rest in peace,” Rev. Tuilaepa told Samoa News.

Videos recorded by residents of Aunuu and posted on social media captured the moment the incident happened where people were screaming for help.

People standing at the Auasi wharf who witnessed what happened contacted their families in Aunuu island for help.

According to Rev. Tuilaepa, all passengers were trying to stay together in one area in the sea while awaiting for a boat to rescue them.

Not all of the passengers in the rough waters could be rescued at one time due to the size of the aumaga’s alia. According to people of Aunuu, two men were left behind in the rough seas to await a second trip to rescue them. They were Rev. Tuilaepa and another man, who later became the second victim in this tragic accident.

According to Rev. Tuilaepa, as the alia boat was returning to Aunuu with the rest of the passengers, he then swam to the location where the second man was floating so that they could float together while awaiting the return of the boat to rescue them.

However, things changed after they spent over a hour in deep water. His body felt weak and he also witnessed changes to the second victim (whom he always referred to as his Deacon).

“The current was too strong. It carried us down and then brought us up. It was like a game where you were just floating while the current is controlling everything.”

“I don’t remember how many prayers I made at that moment, it was just too many. I prayed to God and told Him, Father, you called me to be your servant. If this is my time, take me now, but if you know that I haven’t fulfilled my task, please, spare my life,” Rev. Tuilaepa recalled with tears in his eyes.

As they were struggling in the rough sea due to the strong current, Rev. Tuilaepa said that he remembered one time where he tried to pull the second man’s body close to him after he witnessed changes on his face, so that he would not be drawn away by the current.

“I remember after saying my prayer, I immediately saw an empty tire that was already cut into half floating on the other side of us not far away from where we’re floating. I thought to myself, this is my only hope.”

Despite his weak body, Rev. Tuilaepa managed to swim to the location where the half tire was floating and grabbed it. He then used the half tire as a life preserver and immediately put it around his body.

He swam back to the location where his Deacon was floating and noticed that he was not responsive. He tried to wake him up by slapping his cheek but there was no response.

“I remember that time when I tried to wake my deacon up but he did not respond to me. Then, I continued to call out his name and said, deacon, don’t do that to me, please, wake up ...” Rev. Tuilaepa recalled.

Rev. Tuilaepa stated that while he was trying to wake the man who became the second victim, his only hope was to see a boat coming for their rescue.

Finally, the DPS Marine patrol boat arrived and rescued Rev. Tuilaepa, but his deacon didn’t make it. He was pronounced dead upon arrival at the LBJ Hospital.

When asked about his thoughts when God saved his life, along with the other 16 passengers from this deadly incident. Rev. Tuilaepa said, when a thing like this happens in life, it will always remind man that God still exists and nothing is impossible to Him.

“I would like to return thanks to our Heavenly Father for His never ending love, which brought me my life and the rest of the passengers today. Without His protection, we would have been unable to make it.

“I would also like to thank those who worked together to rescue us during this tragic incident including DPS personnel and people of Aunu’u. Thank you so much for your efforts. My heart goes out to families of the two victims. May God be with you all,” Rev. Tuilaepa concluded.