Samoa’s ‘stigmata” girl on her way to Rome 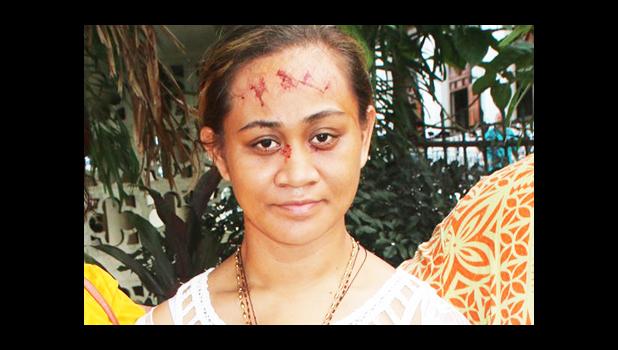 Apia, SAMOA — Samoa’s Prime Minister Tuilaepa Sailele Malielegaoi along with the Catholic Church in Samoa have supported the messages written in ancient Hebrew by Toaipuapuagā Opapo-Ah Chong — and she and a delegation led by the Minister of Agriculture and Fisheries, La’aulialemalietoa Leautea Polataivao left for Rome last Friday to meet with Catholic Church officials at the Vatican.

Opapo-Ah Chong, known as “Toa”,  is the young woman who experienced Stigmata around Easter in Samoa, which caught the attention of Samoans all over the globe.

She is the daughter of Elder Reverend Opapo Oeti of the Congregational Christian Church of Samoa (CCCS) in Matautu.

Catholic Church spokesperson, Father Fereti Tautunu in a brief interview with Samoa News pointed out that Toa is a Catholic convert and married her husband in the Catholic Church. “The Church’s position is that we support Toa, and we wish them well on the trip.”

Accompanying Opapo-Ah Chong on the trip aside from the government official, is her husband, Patrick Ah Chong, their daughter and her father CCCS Elder Reverend Opapo.

To date Opapo-Ah Chong has written close to 50 messages in Hebrew and also Aramaic, languages she alleges does not read or write. Her father reached out to the CCCS Malua Theological College and the Prime Minister for assistance and the college has been able to translate some of the messages.

Father Tautunu said the Church believes in all of the messages written and received by Opapo-Ah Chong since the Stigmata occurred. He also noted that negative comments by others are because they are too judgmental — but he says the messages are pure.

Last week Tuilaepa during his radio program noted that he was asked to help bring about the translation of the writings in Hebrew.

“One such occurrence happened in front of my own eyes and as leader of the country it is logical that people in need should seek the help of their leader. This same stigmata happened to St. Paul as seen in Paul's Epistle to the Galatians, Chapter 6:17. This supernatural event has happened in Samoa. Not in New Zealand, Australia or any other Christian Pacific Islands.”

Tuilaepa said that to him it’s a special divine blessing for Samoa and, “We Samoan Christians should thank the Lord for His choice of Ms Toaipuapuaga for His mission and a thumbs up for the Pastor of the Congregational Christian Church of Samoa for his daughter and for the first ever stigmata that I know of to have happened to a member of the Protestant faith.”

Tuilaepa said the Minister who is part of the delegation also has an important agricultural meeting in Rome, which was already planned and it just so happens that Opapo-Ah Chong’s trip occurs at the same time. He said the Minister will travel with them and assist them if need be.

One of Opapo-Ah Chong’s messages that was translated is that she is going to Rome accompanied by her father and family and a government official.