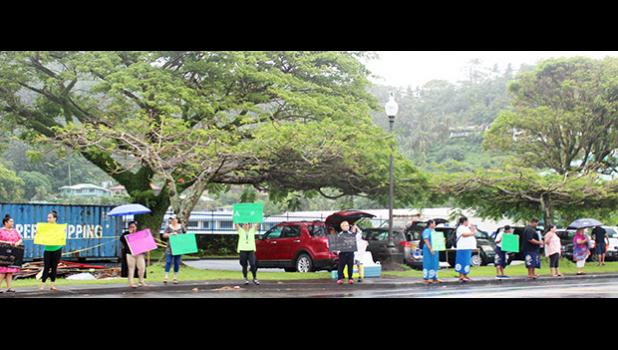 Pago Pago, AMERICAN SAMOA — Bad weather last Friday morning, with heavy rain in the early morning hours, didn’t deter a group of residents who gathered along the main road in Utulei for their “Wave for Repatriation Flights — Not Open Borders” to bring home the estimated 600 American Samoa residents stranded across the U.S.

The wave, which included a handful of Samoana High School students, was organized by Epifania Rapozo of the Tagata Tutu Fa’atasi Alliance of American Samoa (TTFAS), the group behind the call to Gov. Lolo Matalasi Moliga and ASG to allow repatriation flights.

“We have a lot of heart and spirit. We want our people home,” said Rapozo during a brief Samoa News interview at the wave-venue, and she emphasized that, “I want to go home”.

Rapozo, who was born in a American Samoa and a current resident of Washington state, traveled to the territory with her two children in February to visit her grandfather — and later when he passed away — to attend his funeral services.

She and her children, have been stranded here since borders were closed in late March this year with Hawaiian Airlines flights between Honolulu and Pago Pago suspended — now up until the end of November.

As of Friday, there has been no word on a repatriation flight, as the governor remains concerned with the continuing increase in the number of coronavirus cases in Hawaii and other US states.

Hawaii Health Department data shows that as of 12noon on Saturday, Oct. 24th, the state’s total confirmed COVID-19 cases stood at 14,553 and 212 deaths.

Asked during the Samoa News interview at the wave-site on Friday morning — what is the “clear message” the group wants territorial leaders to know, Rapozo responded, “Our clear message is to repatriate, not open borders.”

“The government has one job and that job is to do right by its people. However, American Samoa Government has failed not only myself, but my family and its citizens, by making us feel [like] unimportant irritants and pariahs to society,” said Rapozo, as she read from a prepared statement.

“We’ve exhausted every measure we can think of to work collaboratively to come up with safe solutions such as providing facts, and data with proof for safe repatriation. Yet, your response is to do nothing,” she said directing her words to ASG.

“Why is it that all our fellow neighbor islands with limited resources and money can repatriate their citizens successfully, while nothing is being done on our behalf?” she asked.

“Wake up! COVID is here and it isn't going anywhere,” she told ASG and cited a quote from Brene Brown, “Brave leaders are never silent around hard things.”

“We must be proactive, not reactive during this pandemic,” she said. (See Samoa News online version of this story, which includes Rapozo’s full prepared statement that she also submitted as a LTE in today’s issue).

ASG coronavirus task force chairman, Iulogologo Joseph Pereira didn’t immediately respond to Samoa News follow up questions on the status of a repatriation flight. Iulogologo, who is also the governor’s executive assistant, also didn’t respond to a request for comment or reaction to Rapozo’s comments and statement.

Asked if she is aware of any other US residents stranded here, Rapozo said “there are quite a few that I was able to link up with and they are all part of the Tagata Tutu Fa’atasi Alliance of American Samoa.”

As for any planned future wave, she said, “We’ll see,” and reiterated that there has been no response from the government to the group’s call for repatriation flights — not reopening borders.

As the group waved from the sidewalk on the road next to the Centennial Building, several motorist honked their car horns. One grandmother, who participated in the wave, held a placard saying “REPATRIATION — BRING MY BABIES HOME, NO OPEN BORDERS!”

Another placard made a simple declaration, “BRING OUR PEOPLE HOME”.