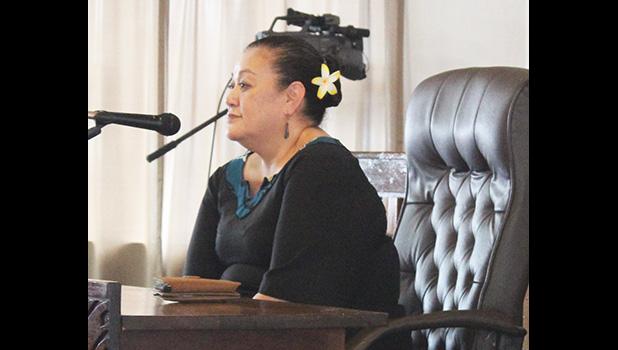 House says only a confirmed AG can sit on the ASEDA board
By
Fili Sagapolutele
fili@samoanews.com

Pago Pago, AMERICAN SAMOA — While the House has opted not to act on the governor’s nomination of acting Attorney General, Mitzie Jessop-Ta’ase to the American Samoa Economic Development Authority (ASEDA) board of directors, the Senate yesterday gave its endorsement.

Jessop-Ta’ase “will bring to the board the legal expertise necessary to help navigate the difficult issues facing ASEDA,” Lolo wrote, noting that Jessop-Ta’ase’s experience with bond-related projects while working for the Fono gives her advanced understanding of the background that will allow her to step in and make immediate contributions.

“Her willingness to serve is greatly appreciated, especially as ASEDA remains an important entity in fostering economic growth for our territory,” said Lolo who urged the Fono for the nominee’s confirmation to the board.

During yesterday’s Senate committee confirmation hearing, which lasted for about 6-minutes, Sen. Fonoti Tafa’ifa Aufata asked the nominee if she has been confirmed as Attorney General by the House to which Jessop-Ta’ase said, currently no.

Sen. Muagututi’a Tauoa moved to dismiss the witness and the asked the committee to make a decision, saying that the nominee is a daughter of American Samoa and has served in government for a long time. He extended best wishes to the nominee.

Jessop-Ta’ase’s nomination to the ASEDA board came up last week in the House where some lawmakers raised concerns that she has twice been rejected by the House as the Attorney General, according to some faipule who attended the session.

According to some House members there is also concern that only a confirmed AG can sit on the ASEDA board but not an acting AG. Two faipule said that if the governor wants to re-appoint Jessop-Ta’ase to the same position, that nomination would have to be submitted in the next session, which starts in July.

A few days after the House rejected her nomination as AG, the governor re-appointed Jessop-Ta’ase on Mar. 25th as acting AG, saying that that this “is a pivotal moment for our people as we come together to face the challenge of the COVID-19 pandemic.”