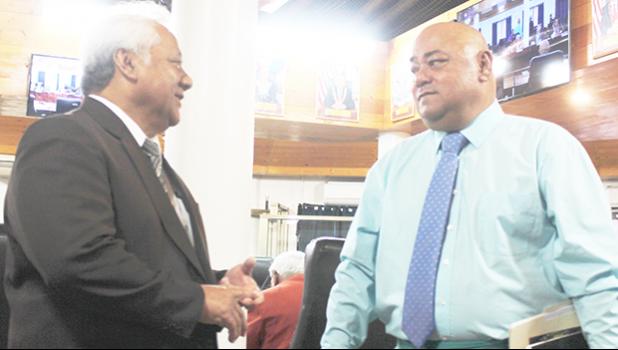 Pago Pago, AMERICAN SAMOA — Sen. Fai’ivae Iuli Godinet is the sponsor of a Senate bill amending the pay scale for the local Department of Education personnel — with this legislation legitimizing the new teacher pay scale and salary reclassification for ASDOE that went into effect in May this year.

The bill was the subject of the Senate Education Committee hearing yesterday morning chaired by Fai’ivae, who is the committee’s co-chair. He explained that the Senate bill spells out in detail language of the new ASDOE pay scale and the details shared by Education director, Talauega Dr. Samasoni Asaeli during the ASDOE budget hearing recently.

Fai’ivae said that the Senate last month had rejected an Administration bill, which repeals current law on teacher pay scale, due to the fact that the legislation didn’t provide the new pay scale or any other details.

He told Talauega, as well as the committee, that the Senate didn’t object to the teacher pay scale, but to the way the Administration bill was presented, without any information regarding the new pay scale and salary reclassification.

Responding to a committee question, Talauega said input on the new pay scale started from ASDOE, followed by input from the governor as well as the Department of Human Resources. Research, he said, was also conducted on pay in the U.S and neighboring countries.

Talauega also confirmed all data, pay scale information and details were given to Fai’ivae, who told the committee that another provision in the Senate bill which addresses concerns raised by senators is that consideration of salary classification takes into account years of service and the degree achieved by the ASDOE personnel.

The bill was presented for second reading during yesterday’s Senate session, and in a 13-1 vote, with a show of hands, the Senate approved the measure, which now goes through third and final reading today.

According to provisions of the bill, salaries of teaching personnel are adjusted in accordance with certification regulations, which it details in the language of the bill — such as the degree and type of certification they received.

According to the bill’s language, the base rate for all ASDOE personnel is:

The bill also provides step increases for adjustment of salaries based on ASDOE employee’s years of service.

The bill’s preamble points out that existing ASDOE pay scale is woefully inadequate given the challenges teachers and ASDOE personnel face and the precarious economic stage the territory is currently facing.  And despite these challenges, ASDOE teaching personnel must often provide their own supplies and instructional materials.

It says that, “if we are serious about providing our children with the best education, we must be prepared to hire effective teaching professionals. We can only do that by offering competitive salaries to attract and retain the best educators in the profession.”

Therefore, amending the educator pay scale will alleviate some of the challenges and better provide and assist ASDOE personnel with their profession. The proposed law shall become effective immediately upon passage by the Legislature and approval by the governor, according to a provision of the bill.